Most bands start by playing live and then record an album. Not this new jam band supergroup 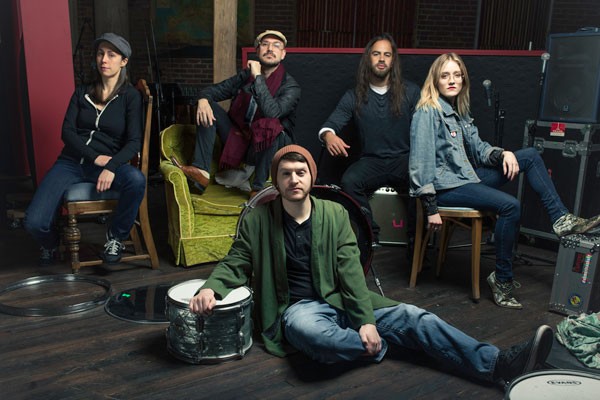 If you want to hear the jam band-style rock music this group of talented and experienced musicians brings to the table, for the most part, you'll have to catch them live.

When you go out in search of the music of Ghost Light, you'll only find a couple videos featuring music recorded in the studio, and now, a few live videos from the band's current tour. The new "supergroup" includes members of American Babies, Brothers Past and a few fresh faces.

"I was doing the American Babies thing, I guess a couple of years ago, and (pianist) Holly (Bowling) had sat in with the band a few times and we just kind of hit it off," Tom Hamilton says. "It felt like kindred souls when it came to our playing situation."

Leading up to the formation of Ghost Light, Hamilton felt like it was time for a change in personnel in American Babies. He hoped to get a new rhythm section, but when speaking with bandmate Raina Mullen and their manager, they kept tossing around the idea of a new band.

"I feel like I'm in a new spot in my career and life, time for a fresh start," Hamilton says. "That kind of was the catalyst. I did a little research before I went to Holly, floated the idea to these guys in passing a year and a half ago. We were super positive about the idea."

From there, Ghost Light was born. This time around, the band hit the studio first. To avoid creating another version of American Babies, they needed material and they needed identity. Each of the five musicians brought their own songs and their own personality to the studio. The idea to go with a recording-first approach before ever playing together live allowed the band to build its dynamic. Speaking to Hamilton after the band's first two live shows, he couldn't be more pleased.


"With this particular group, for some people this is their first real band and in that case, it's exciting to see them discovering how cool it can be to be in a band." —Tom Hamilton tweet this

"Both have been incredible, both sold out," Hamilton says. "It's been an incredible experience. It literally couldn't have gone better, people have loved the shows."

On a broader scope, Hamilton loves the band aspect of performing and bringing these songs to life.

"Culturally, everyone is so self involved, obsessed with our own egos. It's about the solo artist or the musician's ego," Hamilton says. "That's not the shit that lasts forever, man. Led Zeppelin was a band. The Beatles were a band. Being bigger than the sum of your parts. That's what this feels like. It's not just one person's voice, it's five people collectively steering the ship."

Ghost Light brings together the band dynamic, and playing with musicians they already know and respect makes a big difference.

"I just think a team is a special thing," Hamilton says. "Being inclusive and sacrificing your own ego for the greater good, it's a super important, powerful thing. With this particular group, for some people this is their first real band and in that case, it's exciting to see them discovering how cool it can be to be in a band.