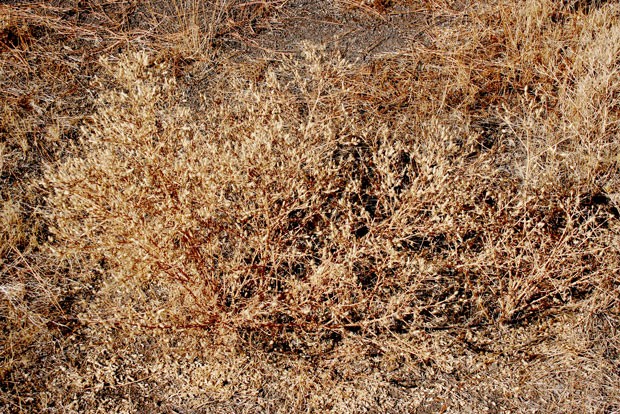 The photo seen here was taken just last week on private ground adjacent to Hwy. 20 east of Sisters. It's spotted knapweed gone to seed—one of the three species of knapweed, pushing too many of our native plants aside, using precious water and nutrients doing so, and generally becoming a huge nuisance. They gotta' go!

There are two seasons when knapweed is most vulnerable: Spring—when it first starts growing — and right now, fall — when it has gone to seed. Kill it NOW, TODAY, PLEASE! before it can spread any more seeds.

It's too late to use chemicals; grab up a nice, big HD black plastic bag, put on a pair of rugged gloves and pull the seed-laden plants from the ground (carefully so as not to dislodge seeds). Gently knock off the soil and stuff it into the bag. Collect all the seeds that have fallen from the plant and toss them into the bag. Tie it shut, leave it out in the sun, and then send the bag to the landfill as garbage.

Knapweeds are tough customers. If you don't get all the seeds in that black plastic bag, and a few of them drop to the earth, they'll get pushed into the soil by all your thrashing around and can lay there for up to five years—or more—waiting for just the right conditions to sprout. That's why, in many locations, it takes up to eight years to completely remove spotted or diffuse knapweed.

Russian knapweed is even worse. It's a creeping perennial that reproduces from seed and root stock. After it goes to seed in fall it will die back and go to sleep for the winter. That leaves both viable seeds in the soil for the next generation of plants, plus the mother plant.

Worse yet, the root stalk of Russian knapweed can grow to a depth of 20 feet or more in search of water and nutrients. Even if you see it starting up in spring and pull it, you have to get all of those rhizomes or the plant will just generate a new head, poke it into the sunlight, and here it comes — again.

For me, the best way to kill knapweed in place is using a safe, organic compound: a half-gallon of white vinegar, (the higher acetic level of vinegar the better). Household white vinegar is 5 percent and will work fine, but 9 percent or higher is preferable. Mix well with a half-bottle of lemon juice and half-cup of castile soap and apply to the plants.

Yes, a chemical poison (or heavy vinegar solution) can be used to kill Russian knapweed, but the chemical herbicide must be applied with the utmost care. Use a small dripper of Roundup, 2-4D, or Escort and apply it directly to the plant ONLY; don't broadcast it in hopes of getting on the target. You'll just kill native plants while doing so and cause serious biological problems to the land and any veggies close by.

And we sure don't want to repeat the present Oregon Department of Transportation debacle and kill any more trees with chemicals!

It is my personal choice to stay away from the variety of introduced insects you can purchase to kill knapweed. After they have done their job (if they really can) I can't help but wonder and worry over what they'll turn to next, if all there is are native plants.

It takes patience to win the battle with knapweeds. Wyoming and Montana know that to be so, as they have all but lost the battle. Knapweeds have been reported to have spread to U.S. Forest Service and Bureau of Land Management lands in such magnitudes it will be very costly and very long term to eliminate.

That's what almost happened along Hwy. 97, south of Bend a few years back. Knapweed near Lava Butte was spreading into the forest, but the concentrated efforts of ODOT, in cooperation with county and federal weed-control teams stopped it. The mission of the Deschutes County Weed Control District is to: "Work cooperatively to promote and implement noxious weed control in Deschutes County."

When you pull knapweed, wear leather or rubber gloves, as those same enzymes are said to cause problems with human biology as well. However, if pulled early in the spring, there is not much chemical released, and in the fall, most of the moisture has left the stalks; it's those seed heads containing thousands of viable seeds that have to be stopped from sprouting. The use of a weed-whacker or rotor-tiller will only spread the seeds.

Keep in mind the penalty of leaving knapweed to grow and reproduce on your property in Sisters can be costly. Section 8.16.050 of the Sisters weed code says: "Any person violating any of the provisions of this Chapter shall upon conviction be punished by a fine not exceeding One Hundred Dollars ($100) for each day the person or persons is in violation of this Code."

Weed signs posted along county roads by retired County Forester Dan Sherwin and the Deschutes County Weed Board way back in 2002 have been very effective in getting people to look for knapweeds on their property, and leave no question of who is responsible to remove them.

Ed Keith, present County Forester is keeping a close eye on knapweed as well. He's has been issuing letters to landowners asking them to clean up their act so we don't fall into the weed pit that's plaguing other states in the West. Like Smokey says, "Only you...!"