Oregon's cannabis industry is in a major state of flux. Oversupply, plummeting prices and widespread consolidation are a boon for consumers—but those issues can overshadow the value of supporting Oregon "craft cannabis."

This isn't a crucial consideration for consumers who simply want the lowest-possible price. No one should be shamed because of a limited budget—especially medical patients on a fixed income. (Cannabis products covered by Medicaid/insurance should remain a goal for the industry.) 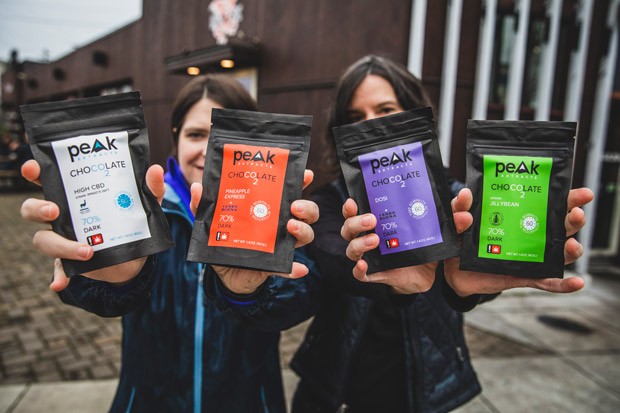 Still, some consumers do have an interest in the growers/processors and their production methods and ingredients. Those people come with the same questions they have when considering the purchase of any craft product. I probably pay more at the farmer's market, but I have a more trusted relationship with those farmers than I do with the Safeway or Target produce buyer.

Peak Extracts has been around since 2014, starting in the Oregon Medical Marijuana Program marketplace. It's the creation of business and life partners Kate Black and Katie Stem, who, like many craft brand owners, have a longtime, deeply personal relationship with the plant. With Crohn's disease, Stem was an OMMP patient for nearly 10 years, serving as her own guinea pig to determine which strains, recipes and extraction methods best delivered specific effects and benefits. Her preferred delivery system was home-made chocolates, which were exclusively strain-specific in content. (A participant in the R&D for this project is where I hope to go when I pass.)

Stem's efforts were built upon a knowledge base including a pre-med track, a degree in traditional Chinese medicine, and being a nationally-certified licensed herbalist and acupuncturist. Black brought complementary professional experience in design, chocolate making and culinary management. Peak hit medical dispensary shelves with a line of "vegan, gluten-free single-strain couverture chocolates." ("Couverture" is a high-quality type of chocolate.)

Peak moved into Oregon's recreational Adult Use program in 2016, receiving what they say is the state's first edible processors license. The company exists as a rarity in the cannabis processing community: two queer women in an overwhelmingly male-dominated industry. Stem and Black regaled me with stories of years of enduring mansplaining, "Look, honey" exchanges and other experiences that most processors won't encounter, based solely on gender. In December 2018, Stem told Dope Magazine, "I think women have been more successful in this industry because it is new, and has been less entrenched through generations of preferential treatment. Although there are more female CEOs in cannabis, such as me, the trend towards consolidation almost invariably results in a male being in charge of the parent company. If we're not careful, all of the inroads made in the first several years of the industry will be lost." Word.

Those who dismissively referred to them as "the girls" have watched Peak become the second-largest cannabis chocolate producer in Oregon, still expanding its offerings. In addition to the award-winning chocolate line, Peak has a pain relieving topical, Rescue Rub, and a collection of strain specific Co2 cartridges. I sampled two, including a sativa-dominant OG strain, "Panama Red," and one CBD dominant. My busy daytime schedule was well served by the terpene-rich Panama, while the CBD calmed my motor mouth and mind as the workday hit hour 10.

Product quality is always the first consideration. Knowing that a purchase benefits individuals and values that you support is increasingly important, as well. Oregon has a wealth of amazing products produced by awesome teams, and no one brand is "the best." We have an embarrassment of quality cannabis riches. (I've been to Las Vegas dispensaries. Trust me.) When spending your cannabis dollar, seek out whatever combination of price and quality you can afford. But with prices at historically low levels, you can try out brands that represent the best of what Oregon stands for with cannabis. The "who and how" count for as much as the "what."