Kudos to the Peaceful Protesters. Now, Let's Get to Work.

Kudos to the peaceful protesters in Prineville, Redmond and Bend for showing up in numbers this weekend for the Black Lives Matter protests. Kudos to those who kept the momentum going and organized another demonstration Tuesday. 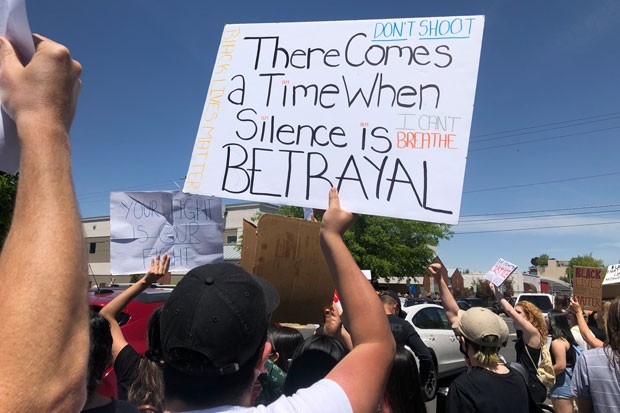 Kudos to local police departments of Bend and Redmond for being proactive in speaking out against the death of George Floyd.

Kudos to those who took to social media to speak out against injustice.

These are all good things—but now it's time to get to work.

Things are not rosy, and Central Oregon is no bubble; no utopia about which we can say that there are no issues to address. We may not have seen any recent deaths of people of color at the hands of the police around these parts, but that doesn't exonerate the people of our region from doing more to interrupt racism and to support our growing population of people of color.

Just last week, the Deschutes County District Attorney's office was served a tort claim notice by a former assistant DA, a Mexican-American woman, Jasmyn Troncosco, who, according to a note from the DA's office, "alleges she was treated horribly by colleagues during her employment with Deschutes County and she alleges this treatment was motivated by her race and gender." tweet this

Students in our schools are still called the "N" word by classmates. They're still forced to grapple with the offhand racist comments of some teachers. Community members are still pulled over near their homes, asked "what they're doing in this neighborhood." The stories of indigenous people who once lived here have been largely erased by the settler culture that followed.

Just last week, the Deschutes County District Attorney's office was served a tort claim notice by a former assistant DA, a Mexican-American woman, Jasmyn Troncosco, who, according to a note from the DA's office, "alleges she was treated horribly by colleagues during her employment with Deschutes County and she alleges this treatment was motivated by her race and gender." DA John Hummel has said the alleged treatment by his staff was "despicable," and said he is committed to finding out the facts and responding appropriately. That appears to be an appropriate response—but we as a community can all do more.

We can call on our elected officials and those in charge of our police departments, sheriff's offices, school districts, city halls, parks departments and counties to not only speak out against racism and police brutality, but also to actively train and equip themselves to understand and interrupt destructive racism. In response to a flood of inquiries, the City of Bend Police Department has, this week, outlined a number of measures it is taking to address Diversity, Equity and Inclusion within its department. It is engaged in DEI trainings for its workforce, but not all members of the department have done the training. Due to pressure from the public, Bend PD's leaders say they are committed to doing more. In addition to mandatory DEI trainings there, we would like to see them implement body cams for all officers. Similar efforts need to happen at the local sheriff's offices as well. At the Bend-La Pine Schools district, similar pressure has encouraged training more staff members in DEI principles for education; but again, without making the efforts mandatory, it's often only the willing who participate. This kind of governmental change will come at a cost to taxpayers and it is where we need to back our desire for an inclusive community with dollars of support.

If we learn anything from the protests, it is that public pressure works. This moment in history has brought forward a groundswell of enthusiasm, emotion and energy toward seeing the United States become a more inclusive and just society. Let's all of us, not just our public officials, but the wider public who pays for those entities to operate, do our part, by showing up to public meetings in the same numbers we show up to protests. Let's continue to press our public entities to not just point to their discrimination and equity policies, but to go beyond policy and into meaningful action that touches every employee in every public hall of government. This is the way we channel that enthusiasm from the streets into meaningful change.