Bend's Summit Express Jazz Band had to call in reinforcements to provide a complete complement for "La Cage aux Folles," an extravagant musical appearing in Bend's Drake Park Friday and Saturday. The Theater in the Park production pulls out all the stops: extravagant costumes, makeup, lights, sound and innovation to present the glamour-and-glitz-coated treatise on love, acceptance and personal authenticity. 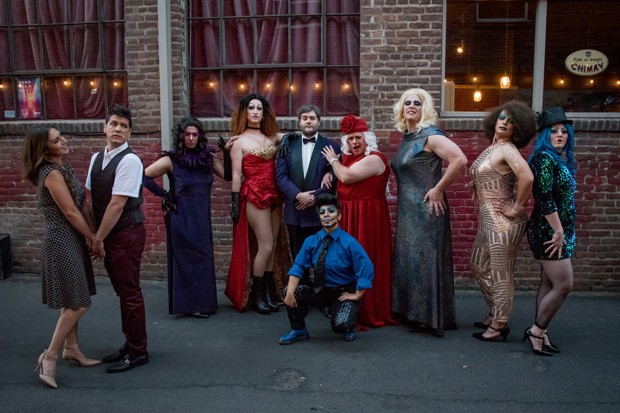 Anyone who has seen "Birdcage" the movie knows the story of Albin and Georges, their son, and his ultra-conservative fiancee—but may not have witnessed the award-winning music and choreography of the live theater version that is "La Cage." Bend choreographer Michelle Mejaski, whose directorial debut of "Jesus Christ Superstar" enjoyed tremendous success last summer, returns to the director's chair for "La Cage." Vocal direction is provided by Bend vocal instructor Trish Van Camp Sewell.

"With the movie, they took out a lot of the song and dance numbers," Mejaski says. "With 'La Cage,' it is full-on dancing, because it centers around the drag queen club, the La Cage aux Folles," she explains. "The opening number is the Cagelles, who are the drag kings and queens. Albin, who is also Za Za, has her solos with the Cagelles backing her. Jean-Michel sings about his fiancee Ann; and the two main leads, Albin and Georges, sing together. It is full of song and dance for all the characters, from top to bottom."

Mejaski noted the special challenges of presenting the show in Drake Park. "There are quite a few challenges being in the park," she concedes. "We don't have any 'lights down.' We've actually taken out a few scene changes and bled them into each other. For example, in one of the scenes, Georges is in the club. When he's done introducing La Cage, rather than the lights going down, he simply walks into the next scene, takes off his jacket, hangs it up and he's in his apartment. It's the same thing as almost the entire company goes into Chez Jacqueline," she continues. "The cafe is not set up, so we all have a piece—a chair, a table. We all walk in and set the scene, sit down and get in character."

Another limitation is the small stage, Mejaski adds, which has no wings for entry and exit. "There is no place for the actors to stand where they can see what's happening before their entrances," she explains. "They're going on blind, just by listening and hearing their cues."

“Even though the show is filled with glamour, the underlying message is that love is love, and to be true to yourself.”—Michelle Majeski tweet this

Mejaski says she's enjoyed seeing the actors develop their characters to a point where their personalities come across vividly on the stage. One scene in particular, she says, brings depth to a character that doesn't normally get much notice.

"The character Marie Dindon (portrayed by Laura Lee Coffman) is very much in the background. She has a husband who is a little overbearing and overpowering, yet she has these moments that show her strength. The way that Laura Lee has taken this, it becomes one of my favorite moments in the show. Just this simple eye roll she gives Dindon behind his back. She has created this moment that would otherwise be dismissed, or not there at all."

"La Cage" is full of glitz and glamour, Mejaski says, but what lies beneath is a timely message about our essential humanity, our common desire for love and acceptance. "One of the reasons why I chose this particular musical," she says, "is that I would like to celebrate acceptance and pride. Even though the show is filled with glamour, these beautiful costumes and extravagant makeup, the underlying message through all of it is that love is love, and to be true to yourself.

"We have Jean Michel asking his parents, who have given him nothing but love and support his whole life, to please pretend like they're someone else," she explains. "In the end, the truth is told: that Mother is a transvestite and that Father is a homosexual, and the two of them are a couple. Nothing good comes from denying who you are, lying about who you are, or asking someone to lie about who you are. Love is love. That's why I chose the show."

Mejaski advises coming to the park prepared for the chill that comes after sunset. She also advises bringing a chair pad. VIP tickets are available for those who'd like a meal before the show.

Editor's note: Theater in the Park is produced by Lay It Out Events, the Source Weekly's sister company.