Larch Light Up the Forests

Golden needles shout fall and mark the turn of the season

Fall is a fleeting thing in Central Oregon. One minute you are lamenting the loss of summer and then before you know it, winter arrives and you didn't get a chance to soak in the delights of the season. So, take heed: now is the time to enjoy fall, and one great way to do that is by enjoying the seasonal colors of the Western larch.

Western larch (Larix occidentalis) is a large coniferous tree native to Central Oregon that can grow 100-150 feet tall. It has a narrow shape with relatively short branches and has furrowed, cinnamon-brown bark like that of the ponderosa pine. Its cones are bristly and small, 1-13/8 inches, and its needles are soft and short, 1-1 ¾ inches, and are arranged on twigs in a series of little tufts. The magic of larch, however, is in those needles, because as a deciduous conifer they turn a spectacular yellow each fall! 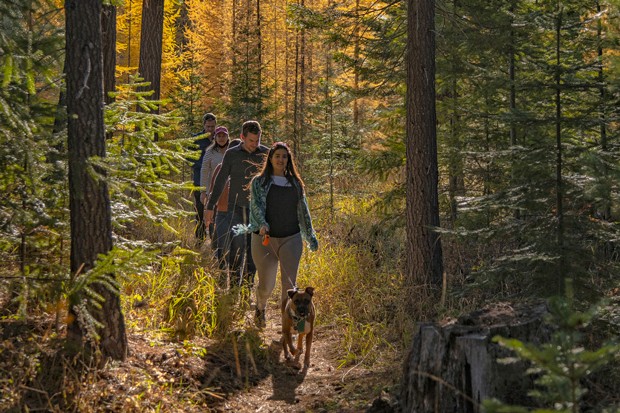 Deciduous trees are those that lose their leaves—or needles in this case—each fall. Most conifers—or cone-bearing trees—do not lose their needles and remain evergreen year round (hence the common name evergreen). The Western larch is one of a handful of deciduous conifers in the conifer world. Others include dawn redwood and some cypress trees in the genus Taxodium. Here in Central Oregon, larch trees usually begin to change color in mid-October. First the needles will begin to show a hint of yellow, and then they'll transition into a brilliant yellow that will fall to the ground and carpet the forest floor. Forests with lots of larch trees are particularly spectacular in the fall as their golden needles offer a strong contrast to the sea of green ponderosa pine and Douglas fir.

Winter is not the Western larch's strong suit. Once those beautiful needles fall, it spends the winter bare and rather dead-looking. It is often confused for a beetle-killed pine, but can be differentiated by the warty texture of its twigs (those little needle tufts). But, come spring, the larch will sprout new needles in the most delicious spring green color. It is a harbinger of spring, brightening forests with fresh new life that demands attention and brings hope. It also demands sunshine! Western larch are sun lovers and don't like the shade because they need to maximize the amount they can photosynthesize while their needles are on.

Western larch is a long-lived tree (some live 700-900 years!) that grows quickly and is very resistant to fire. Its thick bark, deep roots, lack of lower limbs and needles with high moisture content help it survive the regular low-intensity fires that occur in our region. Western larch is a valuable wood for construction and heating since it has the densest wood of all our conifers. Native Americans use the tree for a variety of medicinal treatments and make syrup from its sap and gum from its harder pitch. Western larch is also used in the production of turpentine and baking powder.

In the natural world, Western larch is one of the first species to move in after a disturbance like a windstorm or fire. They help pave the way for more shade-loving species that grow under them. A wide variety of wildlife use the resources the Western larch offers. Rodents and squirrels eat its seeds, birds look for insects and nest in its branches, deer and elk will browse on its needles, and bears eat its sweet sap in spring. Flying squirrels, woodpeckers, owls and other species will also nest in holes in the tree, and raptors will nest in the larch when it becomes a snag—a dead, standing tree—later in life.

Despite the many uses and benefits of this native tree, the delight it brings each fall may be one of the most tangible. Take some time to visit a place with Western larch and see them in all their fall glory—they'll be gone before you know it. The Deschutes and Ochoco National Forests have many places where larch thrive. Shevlin Park in Bend is always prime, and the Deschutes Land Trust's Metolius Preserve is a favorite local destination for reveling in the golden needles of the Western larch.