The upcoming gathering on Nov. 13 won't be the first time The Belfry in Sisters has staged a rockin', Joe-inspired "Party for Leonardi." Since the '70s, countless music venues throughout the region, as well as Joe Leonardi's own geodesic dome home, have taken turns showcasing his impressive talent as songwriter, vocalist (think Van Morrison), bass player and guitarist. Whether accompanied by the fine sounds of his bands (Mixed Nuts, Stone Soup, JZ Band, Doc Ryan Band, Cuppa Joe), or alongside members of his showstopping musical family, Joe and company served up gourmet rock, blues, soul and folk. What's different this time is that Joe, who died on Sept. 20, won't be there. Won't be at The Belfry. Won't be taking the stage. 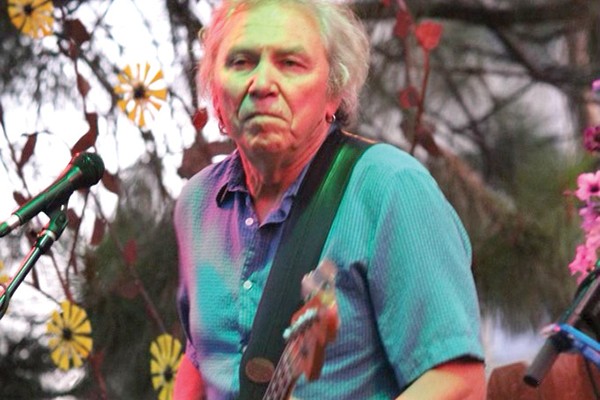 Hold on. That's not entirely true. I mean, we're talking Joe Leonardi, after all...shape shifter, time traveler that he is. He will be there in the song lyrics he wrote, in the music he composed, in the band members he inspired. He'll be there in excerpts from the hundreds of videos Leonardi Media Arts created for regional nonprofits and businesses from 1996 until 2017. He will be there in Media Mania footage, an all-arts happening that took place on the streets, rooftops and alleyways of downtown Bend and Sisters in the early 2000s. He will be there in the expressions of love from family, friends and the countless numbers of people he impacted.

Born in Brooklyn, New York (fuggetaboutit, he never lost the accent), Leonardi made his way to California in 1969, where he spent 15 years as founder and director of the media arts department at the Long Beach Museum of Art, establishing himself as a talented editor/producer in videography. It was also then when Leonardi became friends with the renowned scholar, scientist and philosopher, Buckminster Fuller, known for his popularization of the geodesic dome. Leonardi promised himself he'd build and live in one. But where?

In a 2017 Bulletin article, Leonardi recalled the skepticism expressed by his Los Angeles colleagues when, in 1984, he decided to move to Sisters, Oregon, in the '90s. To Sisters where? To do what? Video? Are you nuts? When he arrived, there were maybe three video artists in the region. But he had a sixth sense about what was ahead for Central Oregon and for his videography and music. Plus, he found 5 acres for his dream home. Leonardi was both artist and intuitive. The only age he ever admitted to was New. The geodesic dome wasn't the only thing Fuller inspired in Leonardi. In thought and deed, Leonardi also embraced Fuller's prescient realization of the need for environmental sustainability and his take on Synergetics, that every action should be for the benefit of all.

The year 2020 marked two decades of professional association and friendship between Leonardi and me, and was also the year COVID became a household word. By then Parkinson's had compromised his gait, robbed him of the ability to chord and strum his guitar, but his voice remained strong, his mind sharp, his outlook positive and his compassion for his fellow man unfailing. We didn't cross paths or speak much, so when he called me that day I was surprised and delighted.

...Hey Ellie girl, how about doin' me a favor? What is it, Joe? Could you take me to the bank? I want to cash my COVID stimulus check. Sure! Happy to. And then after the bank, how about driving me around town to the homeless camps? The homeless camps? Yeah, I'm gonna distribute my stimulus money. Are you sure that's what you want to do, Joe? Yeah. I'm sure.

And so we did. Some we encountered shook his hand, formally thanked him. Some wept with gratitude. Others peered suspiciously from inside their shelter. Leaning on his cane, Leonardi placed the money on the ground in front of their tent. This was vintage Joe Leonardi. There are hundreds of stories like it that those who knew him can recall. For him, giving you the shirt off his back was not a figure of speech. He believed preoccupation with lack, holding on too tight to wealth would result in dire poverty of spirit. As his daughter and singer/songwriter Anastacia Armstrong said of her father, "He...expected me to see the big picture through the lens of love without exception. He taught me to walk the path of love and compassion always."

For Joe Leonardi, family (five children and four grandchildren) was the center and love was what centered family. He'd joke that X-mas was really Ex-mas, a chance to gather all the exes together. They often came. At his frequent jam sessions, he'd chant "Mangia, mangia," invoking his Italian heritage as he urged his friends to the groaning board featuring a large serving bowl of his famous pasta, needed fuel for a night of playing music in Bucky, his dome home. As his youngest daughter, Jesaca Hatcher, once said, her father liked to feed people. And he surely did, in countless ways, literal and figurative.

Before he died Leonardi got to hear Anastacia sing "Renaissance Man," the tribute she wrote to her father that captures the essence of this multidimensional man, the artist, the thinker, the father, the friend. Here's an excerpt:

Look at your life
All the seeds you've sown
Your legacy
The future
All the dreams you've grown
Your kids and grandkids
Your community of friends
All the songs we've sung
Will never end
We celebrate you
Your life
All you've given
Your journey
Is just beginning.

This month Jesaca and Anastacia, with the support of their siblings and children, are orchestrating what promises to be the Leonardi Party of all time to celebrate their father. It will be held on Sunday, Nov. 13 from 2 to 7 p.m. at The Belfry, 302 E. Main Ave, Sisters, Oregon. If you attend, keep your eye out for Joe. You can't miss him. He's larger than life.