Last Stand in the Sand

For some, they've been the site of many a family pick-up game. For others, they're a spring and summertime training ground. But soon, the courts just south of the Les Schwab Amphitheater will be the former home of Bend's largest—and nearly only—outdoor sand volleyball complex.

A representative from the Old Mill District confirmed Monday that after 10 years, it would be reclaiming the space, requiring the four sand volleyball courts to relocate. The only other outdoor courts in Bend are two courts, located at Mountain View High School, which aren't open to the public. 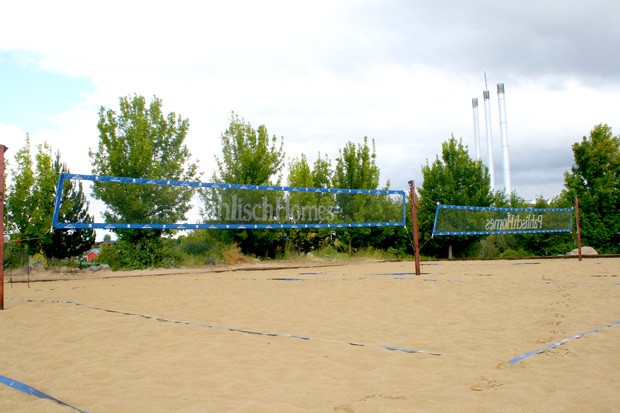 "At this point, we don't know what's going to happen with the space," Old Mill District/Les Schwab Amphitheater Marketing Director Noelle Fredlund told the Source Weekly Monday. She said they have a number of possible development options for the space, but nothing solid. Fredlund acknowledged that the company is exploring remodeling the adjacent amphitheater, but that's separate from any plans for the current court space.

"It's been wonderful that we've gotten 10 years out of it, but it was always a temporary use," Fredlund said.

Adam Ellis is the owner and club director of North Pacific Juniors Volleyball Club, which uses the courts as a practice ground in the warmer months for the more than 125 young athletes in the club. NPJ covers insurance for the courts and has maintained the agreement with the Old Mill District for use of the current space for the past several years. The club has already stopped practicing outdoors for the season—but come late spring, Ellis hopes to have built new courts in two prospective locations.

"The plan is to be up and running at one if not both locations at the beginning of May," Ellis told the Source. He declined to confirm any prospective sites the club may be exploring.

Quinn Keever, a park planner with Bend Park and Recreation District, said she'd attended several meetings with club representatives aiming to find a new home for sand volleyball in Bend, but that BPRD didn't have a sand volleyball project budgeted or planned out in its current five-year plan.

Keever identified Pine Nursery Park as a potential site for the courts, pending an engineer's review.

"We're very much in the feasibility stage," Keever said.

“Our whole point when we built them was to prove that there was a demand for volleyball—and there is—especially in summers and on weekends. It’s worked quite well. Now we are at phase 2.”—John Kelly tweet this

A group of volleyball enthusiasts working together under the name Bend Beach Volleyball originally fundraised and built the courts in 2009, explained John Kelly, one of BBV's original players. Eventually, the group turned the management of the courts over to a competitive league, and ultimately to NPJ.

"Our whole point when we built them was to prove that there was a demand for volleyball—and there is—especially in summers and on weekends," Kelly said. "It's worked quite well. Now we are at phase 2."

The current summer—technically ending this week—will be the last season for the sand courts, Kelly said. Before any "phase 2" commences, Kelly and others are planning a barbecue andtournament, inviting people to come to the courts Saturday, Sept. 21, as a final "thank you" to the Old Mill District and a celebration of 10 good years at the site. Registration for the tournament begins at 8:15, at $20 per player. Email r.reveles@icloud.com, or visit the Bend Beach Volleyball Facebook page for more info.