Musicians remember their last concerts before the pandemic shut things down

May 19, 2020
1 comment
Boy oh boy do we miss live music around here. The last concert I went to was on Sunday, March 8. Joseph was playing at the Tower Theatre on International Women's Day (how perfect) and they tore up the stage. It was an incredibly powerful show, and Natalie Closner even hit a cartwheel up on stage. If I knew at the time that was my last show before stay-home orders, then I'd say it was a good choice. But live music is tough to be away from.

Of course the fans miss it. But what about local musicians who connect with the community through live performances every week? The Source Weekly reached out to a few local artists and asked them to remember that last show: How it felt, what they remember and what they miss. Some shows were right before the pandemic. Some musicians said didn't know what was coming in the next couple of months. 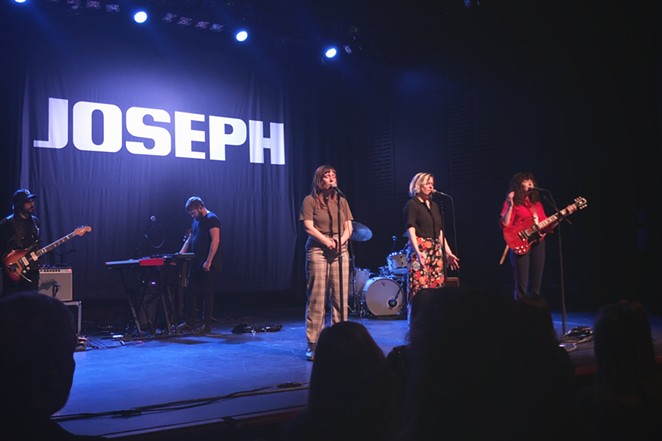 "I remember the last show I played like it was yesterday! It was March 13, right when the panic was setting in. I played at Jackson's Corner east to a very thin crowd, most people stayed in. It was eerie, not knowing what would happen to our great community. I poured my soul into the set for the few folks that were there. I'm really looking forward to re-connecting to music lovers in person."

"Our last gig was at Hoodoo on Valentine's Day. That was our first time playing there and it was sort of a strange and magical experience all in one. We played in front of a huge window where you could see people skiing and snowboarding. That was a cool and unusual sight to see while playing music. Between it being Valentine's Day, and at a ski resort, it was a totally unique experience."

"January 31. We played what would have been our record release in April at the Volcanic with Cosmonautical an AM Clouds for their record release. It was an amazing show, capping steady momentum we'd been building with shows over the past year. The band was super rehearsed, and was sounding like everything I had envisioned when I recorded all these songs some time ago on my own.

"It was our last show live before our own record release was supposed to go down a few months later, also at the Volcanic. Cosmonautical killed it and AM Clouds sounded fantastic. Great last show and evening. Can't wait to do it again."

"The last show Cosmonautical played was here in town at Volcanic Theatre Pub with Hot Snakes. It was an excellent show from one of my favorite rock bands and I remember being really nervous to meet John and Rick from Hot Snakes. I ended up having a good chat with Rick most of the evening, and the show was great. I miss getting the opportunity to meet people you admire and find out they're good people who still love music. I miss seeing my friends' shows in town and seeing everyone I know and have played music with over the years."

"I guess I miss the community aspect of playing music, and performing the most right now equally. I can play my guitar at home and have been writing with some of my downtime and I'm looking forward to sharing some of it soon, hopefully."

"Our  last show was opening for Polecat in March at the Volcanic. What a fun a show. Our band was brand new as it was only the second public show we'd played. We were excited, energetic, riding the high from the new creative gelling of the group and were getting tons of awesome feedback from people in the audience. "

"It was a disappointment for sure to halt all the momentum and good times, but in the grand scheme of things, it's all OK and of course the right thing to do for the public good. I certainly miss the back and forth energy exchange from a live audience the most. Music at it's best is a live event to me, and the beauty of performance is that musicians serve the audience while they serve us right back with their active listening, interpretation of the songs an enjoyment."

Jeshua Marshall - Guardian of the Underdog

"The last show I played before the worldwide shutdown was March 5th with Juniper & Gin. It was a mellow Thursday show at Spoken Moto. Maybe 40 or 50 people were there. Folks were drinking, dancing a little and overall the vibe was nice and mellow. There was some talk about the mysterious Coronavirus but we had no idea that in a few days life as we knew it would come to a screeching halt."


"I miss the camaraderie between fellow musicians and venue staff, I miss the sounds, the vibes, the smells and even the stress. Last year I played over 150 live shows and I was gearing up for another “busy year.” I would be getting ready to go to Europe in a couple days for a 5-week tour. This pause in our “normal” lives has given me a lot of time to reflect on how I’ve taken my extraordinary gift of being able to live primarily off of art for granted."