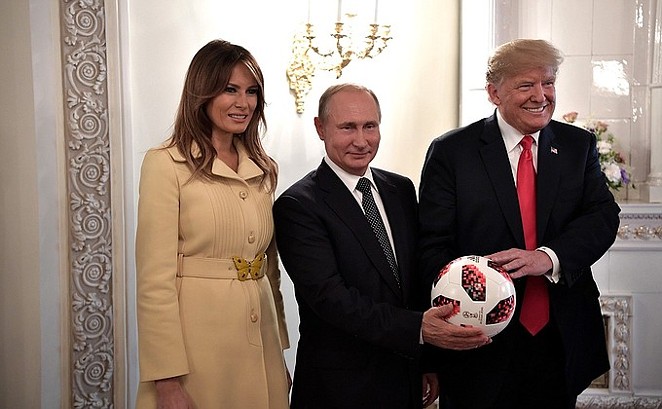 After Monday’s meeting between leaders of two of the world’s superpowers, in which President Trump condemned the Justice Department and accepted the explanation of a hostile foreign leader over the findings of his own intelligence agencies, reactions from Oregon’s two senators were unflattering.

“President Trump is repeatedly siding with a dictator over his own government and allies,” U.S. Sen. Jeff Merkley (D-Ore.) said in a statement released July 16. “He has refused to hold [Vladimir] Putin accountable for Russia’s attack on the United States during the 2016 presidential election, illegal annexation of Crimea, invasion of eastern Ukraine, poisonings on British soil, and other destabilizing actions.”

Sen. Ron Wyden (D-Ore.) tweeted: “Today’s indictment of a Russian national means Republicans can no longer ignore the facts: Russia used @NRA to infiltrate & influence US politics. The Republican leadership should join my investigation & force the @NRA to answer questions about the 2016 election. #FollowTheMoney.” 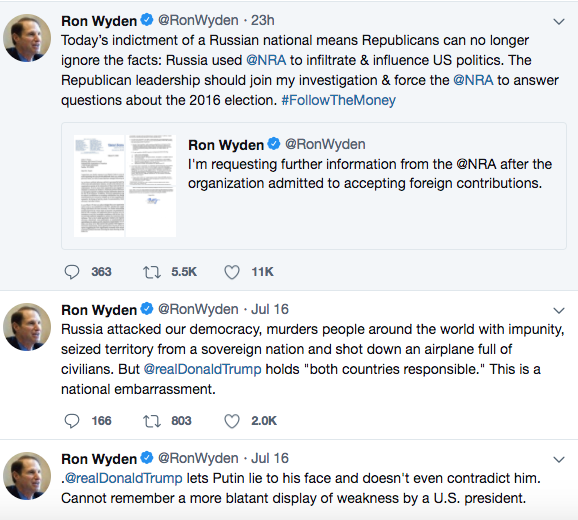 “The assessment by U.S. intelligence agencies that Russia interfered with the 2016 presidential election is not open to debate,” Merkley continued. “That is why we need a President who will be a watchdog for America, no a lapdog for Putin. Instead, President Trump refused to come down on the side of the U.S. government over the denials of Putin, a former KGB spy. Rather than confronting Putin on Russia’s illegal annexation of Crimea and invasion of Eastern Ukraine, President Trump unacceptably faulted the United States for both ‘foolish.’ Face-to-face with a dictator in Putin who has imprisoned and killed journalists and ordered chemical weapon attacks against enemies, President Trump laid out a domestic enemies list of his own: the Democratic Party, the free press, and the FBI.”

On July 16, Sen. John McCain (R-Ariz.) released this statement on his website: “Today’s press conference in Helsinki was one of the most disgraceful performances by an American president in memory. The damage inflicted by President Trump’s naiveté, egotism, false equivalence, and sympathy for autocrats is difficult to calculate. But it is clear that the summit in Helsinki was a tragic mistake.

“President Trump proved not only unable, but unwilling to stand up to Putin. He and Putin seemed to be speaking from the same script as the president made a conscious choice to defend a tyrant against the fair questions of a free press, and to grant Putin an uncontested platform to spew propaganda and lies to the world.”

“President Trump’s warm embrace of Putin comes just days after President Trump’s frosty treatment of stalwart NATO allies as well as our special relationship with the United Kingdom,” Merkley said. “It is a dangerous as it is baffling for President Trump to side with a foreign adversary over our closest allies and our U.S. institutions responsible for safeguarding our security.”

“Russia’s interference in our elections and repeated attempts to subvert democracy in America must be condemned by our country’s leaders. As I have said repeatedly, I fully support the findings of the hardworking Americans in our intelligence community that Russia deliberately attacked our democratic process and continues its hostile efforts against our country and our allies. That is why I voted for unprecedented sanctions against the Russian regime, which the President has signed into law, to send the clear signal that these actions are unacceptable. We cannot allow any country to undermine our right to free and fair elections, and I will continue to support efforts to combat Russian aggression against the very bedrock of our principles and values as Americans.”