Following two singles and an opening for ZZ Top, things are heating up for some of Central Oregon's favorite jammers.

This year's Britt Music & Arts Festival concert season in Jacksonville, Oregon, was a memorable one for a certain Central Oregon band. The Leadbetter Band (Eric Leadbetter, Patrick Pearsall, Dylan Bernal) was originally set to perform earlier in the day on Aug. 17 as an opener on the side stage, but the opening act on the main stage had to pull out a couple weeks before the show. This left the door open for the band to grab that spot. And they weren't just opening for anybody— they would be setting the stage for none other than rock and roll legends ZZ Top.

"It was so cool. They ran a real tight ship, ya know? They've been doing it for 62 years," says Eric Leadbetter. "The crew for the Britt was awesome and the crowd was huge. It was exciting to walk around the stage and see all the people. The band played really well." Growing up, ZZ Top was a band found in Leadbetter's earliest CD collection, right there with The Doors, Lynyrd Skynyrd and all of the "other classics." So this was a moment he and the band were able to soak in and really appreciate. 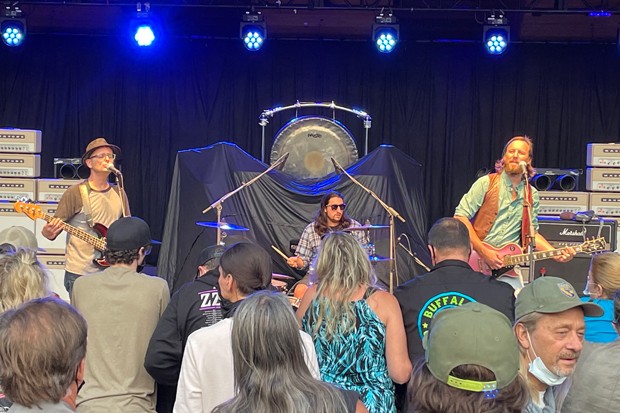 "It was the biggest show I've done for sure. Playing out of that sound system was amazing. It was a difference between like a couple hundred people and a couple thousand."

Now coming off one high, the trio is stepping right into another with the release of its second album, "Howl," which follows the band's self-titled debut released in 2019. The album will be out Oct. 1 with a release party at the Volcanic Theatre Pub.

"We're getting super pumped. In March we recorded the drums, bass and guitar in Tumalo Studios. Then we kind of had to put it on the shelf cause my wife and I ended up moving. Then the overdub tracking took time and there's quite a few guests on there, too," Leadbetter tells the Source. "It was fun putting together the guest vocals so that took longer than expected, but we're really happy with how it sounded. It's a whole different style. After a couple years of being in a band together your music evolves and takes shape."

"Howl" is 11 tracks long and features brand-new material along with a few older songs Leadbetter has written and played live throughout the years but never recorded. So far the band has shared two live versions of songs off the record—the absolute shredder "Middle Man" and the more bluesy, soft-rock crooner, "Habits." Both were filmed and recorded live by Pete Kartsounes at Worthy Brewing. The fun doesn't stop there, either. This Friday, Aug. 27, the Leadbetter Band will release another live recording of "Water Dogs" that Kartsounes shot during a studio session. The band will celebrate this single and video release with a show at Silver Moon Brewing.

It's clear that this has been a summer to remember for the Leadbetter Band, and they definitely have the right kind of hype building for the release of "Howl." When asked about the title of the record, Leadbetter shares that while it's short and to the point, it also serves as a fun memory of his late dog. And he also points out that it hits on the group's style of music.

"I mean, you've heard me sing... Sometimes I kind of howl," laughs Leadbetter.

Pre-orders are now available for "Howl. A CD is $15 plus shipping or grab it on vinyl for $30 plus shipping. Leadbetter Band also has a few new pieces of merch out to go with the album release. Email ericleadbetterlive@gmail.com to place an order.