Awkwafina refreshes in "The Farewell"

I'm not sure what I expected from "The Farewell"—maybe something slightly schmaltzy, with multiple moments of unearned conflict and manipulative attempts to get the audience to reach for their hankies. That sounds harsh, but I don't trust tearjerkers. They try so desperately to cash in on my emotional dollars that most of them feel like cynical sideshow hucksters, ready to do anything to pull a reaction from us rubes. 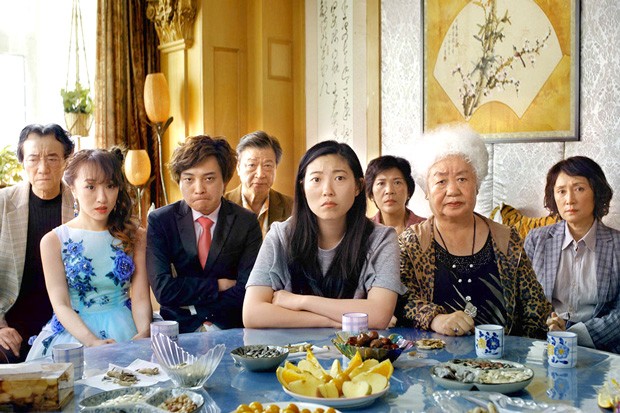 "The Farewell" is the opposite of all that. It floats on a cloud of such brittle emotional honesty that anytime the film threatens to sink into melodrama, a moment of unusual power lifts it back up again. Lulu Wang's script and direction (based on a story she lived through) aren't designed to make you cry; instead, the film is interested in sharing universal truths across cultural and generational divides.

Billi (played with effortless naturalism by Awkwafina), a Chinese-American woman living in New York City, finds out her beloved grandmother—or in Mandarin, Nai Nai—back in Changchun, China, has terminal lung cancer. The twist is that everyone in the family knows about the cancer, except for grandma, who thinks her medical results were benign. Everyone wants her to be able to enjoy her last few months with her friends and family without having to worry about anything—so they stage a wedding as an excuse for everyone in the family to spend time with Nai Nai.

A lesser film would have made the driving focus of the film be the cultural differences between Billi and her Chinese relatives, creating a fish-out-of-water story that we've seen a thousand times before. Luckily, Lulu Wang lived this story and knows how to find every single grace note possible, never resorting to an easy laugh or a manipulative tear-jerk.

Wang and editors Michael Taylor and Matthew Friedman brilliantly cut away just as a scene reaches its crescendo. One scene sees Billi, who had given up playing the piano years earlier, sit down and start playing, stunning the entire room to silence. Instead of watching the family react to Billi's beautiful but flawed playing, we stay right on the subtle micro-expressions of Awkwafina as she plays with more and more passion. Just before the music builds to an explosion, the film cuts away, not giving us the awkward silence that would follow once she finished playing her song. The moment is breathtaking.

There's a lot of hype on this movie (which now rests at 99% on Rotten Tomatoes), and anyone expecting something earth-shattering will be let down. All the joys from this film are subtle moments, not necessarily designed to be massive and crowd-pleasing. This doesn't want to have the hyperbolic power of "A Star is Born" or the quaint quirk of "The Shape of Water." Instead, it's a quiet and unassuming little movie that will stay in your heart for a long time to come.