TMP brings a teen musical to the Tower

You might remember the movie version, starring Reese Witherspoon. Now, local kids are taking on "Legally Blonde" with a junior version. Watch Elle (played by Thoroughly Modern Productions newcomer Tia Wisco) overcome stereotypes and sour grapes to win herself a better beau—and a bright new career for herself to boot—overcoming obstacles and forging new friendships along the way. 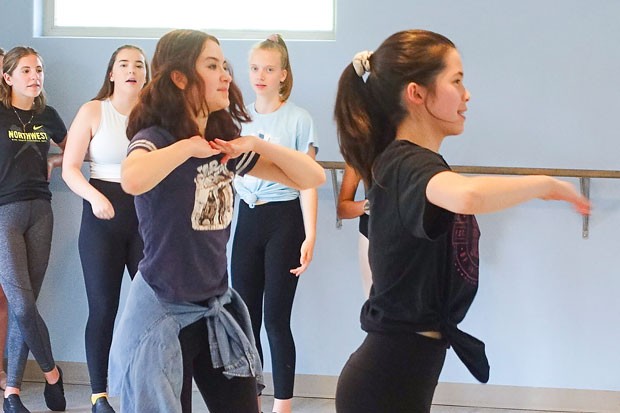 "This is my first show," Wisco said in a recent interview. It will be the first time the eighth-grader has performed in a dramatic production. "All of it is surprising and challenging," she says. "It's a lot of fun." Wisco and fellow eighth-grader Gavin Felciano, who plays Elle's future romantic interest, Emmett, both enjoy taking part in a cheerful comedy. "I like happy endings, because I don't like being sad," Wisco smiles.

"It's pretty much my first comic role," says Felciano. "There have been moments in shows where there's some short comedy moments, but within a pretty blank-slate character. Before this, I came from 'West Side Story,' very dramatic. I feel like you can progress as an actor from a dramatic (part), but it's also good to have something that leaves the audience with a smile on their face, rather than tears running down their eyes," he laughs.

"Gavin was one of the funniest kids we've ever had the chance to work with," Director Savannah Gardner says. "It's fun to see him share that with the audience now."

Gardner says some of the more adult content of the rom-com musical is removed for this junior version of the show. The TMP production will have an all-teen cast, she notes. It's also all-female, with the exception of Felciano as Emmett.

"Gavin is the only boy in the production," Gardner explains. "Emmett is the only character— the only actual person—as far as the men go. All the other male roles are stereotypes. So what we've done, what I've chosen to do as the director is, we have a bunch of girls pretending to be boys, to make fun of the stereotype."

"They're really good at it, too," Music Director Erik McGinnis interjects. Both directors say the kids have a lot of fun with the role reversals. 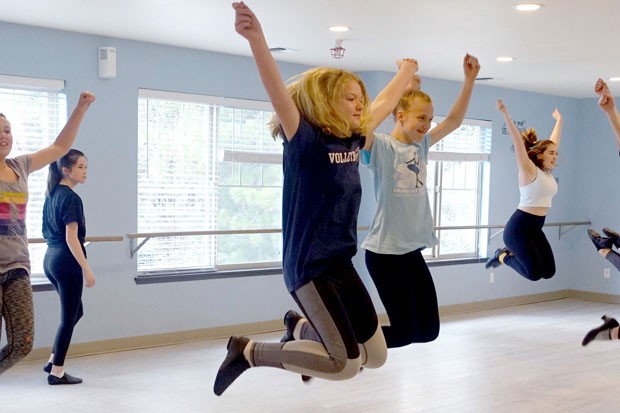 "Sienna (Swetland) plays Callaghan, the stiff (male) professor," Gardner says. "Omigosh. And Alex (Alexandra Dennis), who is one of our smaller girls, she'll have the big Tom Selleck moustache as the UPS guy." At a rehearsal at Terpsichorean Dance Studio of Bend, choreographer and studio director Dakota Weeda coached the iconic scene in which Paulette (Aubrey Luse) practices a physical flirting technique with her crush, the salon's UPS man—and winds up breaking his nose. Weeda choreographs all of the action scenes in the show, including, of course, numerous group dance numbers.

"What I really love about the T3 program (TMP's teen performance arm) that we do every spring," says Gardner, "is that these teenagers don't always get the opportunities to play the bigger roles. They're kind of in that awkward stage where they can't really play the kid anymore, but can't play an adult. These shows are perfect for them."

"In whatever program you're doing," says McGinnis, "there's room for growth. "We are not only teaching the kids the show, but we're slipping in the acting technique, the vocal, the directing technique and the business side of things. All of these kids have a future here in whatever area they want."

Felciano feels that being in musical theater has taught him a lot about singing. "I can do more with my voice now than if I just saw a vocal coach. Doing shows gives you—if there's a certain emotion you need in a song, you can carry it over," he says. "Are you mad in this song, are you sad, are you happy? Learning to distinguish that is harder than most people think."

He also finds that participating in theater is an easy way to make new friends. "I've done shows with probably all of them (in the Blonde cast) at least once before," he says. "Tia (Elle) is one of my friends from school. I kind of made her do the show," he grins. "It worked out great!"

McGinnis couldn't agree more. He says he'd had Tia in a class and knew she had potential, but then at the audition, he says, "she blew our socks off."