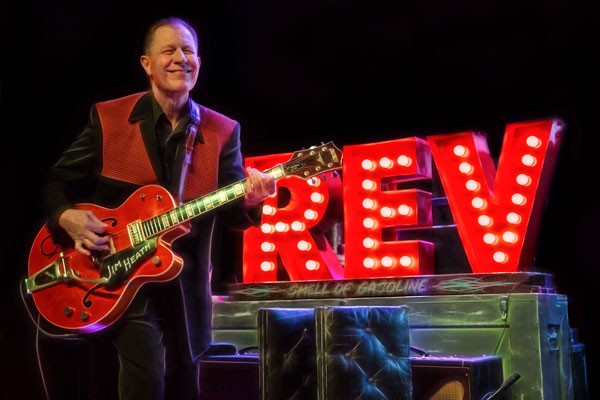 When it comes to modern rockabilly music, one name stands above the rest. The Reverend Horton Heat, a stage name Jim Heath adopted back in 1985, blends elements of rockabilly, punk, country and big band to create the group's classic sound. Fans of that old-time, '50s sound have a friend in "The Reverend," as he's affectionately called.

"One thing I love about rockabilly is it mixes really great musicianship with all styles of American music," Heath says. "The lyrics are really straight ahead and goofy and funny. It's highly entertaining, highly energetic music. There's nothing quite as energetic as that music from the '50s."

Heath and company have toured back and forth across the country for the past 30 years, bringing that high-energy rockabilly sound. Heath still loves jumping on that stage and performing night after night.

"I just love the energy of the whole thing," Heath tells me. "Smiling at the people and the people are smiling back. It's just a wonderful thing. Just getting to goof off and have fun and have the people enjoy it is a dream. It's a dream come true."

"I just love the energy of the whole thing, Smiling at the people and the people are smiling back. It's just a wonderful thing." tweet this

After spending his life performing, Heath admits to enjoying playing music more now than when he was younger. In earlier days, Heath and his bandmates would go on stage with a certain goal in mind, which often led to extra pressure. Sometimes it was pressure to impress an agent or a record label exec; other times, they were opening up for Soundgarden and performing for 10,000 people.

"Now, I'll just get up there and let it rip," Heath says.

The esteem of "The Reverend" has allowed Heath to perform with many of his idols, sharing the stage with Johnny Cash and Jerry Lee Lewis, and doing sessions with Willie Nelson and the Brian Setzer Orchestra.

"Those were my heroes I got to meet and open up for. It's kind of crazy," Heath says. "I don't really know who else I would want to do it with. I really enjoy a guy named JD McPherson, he's pretty awesome."

Heath and the band released their most recent album in 2014. This past summer, the band recorded 10 songs, but Heath admits to being so busy that he hasn't had time to work on the album. He confides that listeners will hear some rock and roll, as well as some Louisiana piano on the new album—but other than that, even Heath doesn't know how the new record will turn out.

"I'm throwing out the possibility of trying to write some more songs and go back in the studio," Heath says.

On this tour, Reverend Horton Heat is joined by Voodoo Glow Skulls and a performer named Big Sandy. Heath says Big Sandy has been joining his band on stage during the middle of The Reverend's set, and in turn, they've been backing him up for a few songs. Heath says the set list is pretty simple, but expect some different songs than fans have seen before.