In the moments before this issue went to press, the Oregon Health Authority recommended we all go back to indoor mask-wearing once again. Every day for the past week or more, the number of COVID-19 cases in the state has continued to go up, and as of this writing, St. Charles hospital had 15 COVID patients, with five in the ICU. Let out that great big sigh. As much as so many of us have wanted this pandemic to be over, it's not—and every day that passes brings that more into focus. Cue the renewed debates about who should be doing what, whether certain businesses should close, whether you should or shouldn't engage that vaccine-hesitant distant relative on social media and all of that... all while Oregon burns. I'd like to say we're smarter than we were when we faced the same issues last summer, but perhaps the only thing I feel smarter about is this: We're all connected. While some of us felt safe knowing we were vaccinated while India's cases raged, this, now, is a reminder that what happens there matters here, and the variants that arise on the other side of the world will come to haunt us, too. 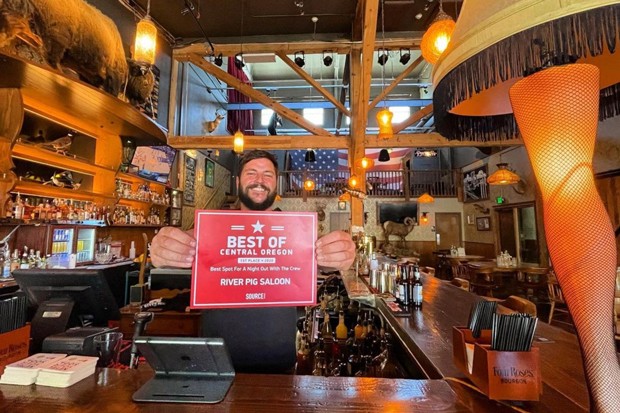 Let's work to resolve global vaccine inequity and we'll probably start getting somewhere. It's probably a much more worthwhile endeavor than battling your aunt's boyfriend's kid on social media....

Thanks for reminding us during another drought year that we need to reduce our use of water and reuse what we can. After reading the book "Pipe Dreams" by Wald, I have researched more and started doing even better conserving water I use.


You say that last year you reported that Bend has a three-step treatment for wastewater. The current website for Bend says it is six steps, five for water plus one for solids, so they must have improved things. We now need to lobby other cities to do likewise, with projects like the Prineville creation of wetlands to improve wastewater treatment.

After reading a recent article about restrictions at Les Schwab Amphitheater many should seriously reconsider attending ANY concert at that venue. I know we won't after many years of attending.


No purses, or backpacks allowed and let's carry what we need in a plastic bag???? At some concerts we're "invited" to "stand, dance or sit on the grass" because blankets or chairs aren't allowed. Don't spin this policy and try to make this an issue of weapons because there are other methods for dealing with that at airports, federal buildings, sporting events, etc. This is all about maximizing attendance while limiting food and beverages so it's more profitable for the venue. It's NOT ABOUT preventing any potential violence because that could happen with someone positioned outside the venue with a semi-automatic weapon (remember Las Vegas?).

Spending $100 for a ticket plus fees is outrageous enough. Now we have to add $50 for a hot dog and a beer. What about the many people who have dietary restrictions and can't eat the food sold at the concert? Guess they just go hungry for four hours because they can't bring in a gluten-free protein bar?

No blankets, no comfortable chairs, no food, no beverage, no handbag, no backpack, NO FUN (put plenty of $$$$$ required). They have forgotten a good portion of the demographics who can actually afford to attend these concerts!

The willfully ignorant have zero interest in listening to facts or science. Their only line of thinking revolves around fear, misinformation and blindly following their political bias. As far as their "concerns," I think the voting public spoke loud and clear. The candidates that ran on opposing CRT and "unmasking" lost—soundly. Obviously the majority of district voters don't find these to be the top concerns in the schools, and the new board shouldn't waste any more time with them.

The facts and science have shown time and again that we have a particularly vulnerable population that requires care as always. It does not include most people, or children. The political bias came swiftly during an election year for obvious results. Follow the chronology of voting adjustments made across the land. CRT need only replace the word "white" with the word "black for any child to see its racist precepts. Remember when the "losing" candidates received threats at their gatherings before the election? The top concerns for schools should represent the voice of the parents above everyone else. The new board has already shown they desperately curtail speaking time for any parent who opposes their leftist policies.

I sure would love it if the main topic of discussion would be on lessons learned from the past year rather than all focus going on masks/no masks so that we could try and improve the education for our kids.... and if I really dream—how we can have some solid education reform as I'm pretty sure there has been much learned in recent decades that would warrant some of the outdated education to be re-examined and updated.

On July 17 across the nation there were 150 candlelight vigils in support of voting rights. The date was chosen to honor the late Congressman John Lewis, a voting rights advocate. Of those 150 gatherings in 42 states, one was right here in Bend.


Hosted by the League of Women Voters of Deschutes County, the vigil attracted persons from as far away as Jacksonville and Eugene.

Oregon has proven that voting by mail is safe and secure and efficient. It should be accessible for all U.S. citizens. Senator Jeff Merkley is one of the sponsors of the For the People Act, a comprehensive law that would facilitate voting.

At this time when voting has become a target of some state legislatures, it is critical that we draw a line in the sand and demand protections for that sacred right and duty.  Since we are lucky enough to have a senator who wants to protect our right, we must flood the offices of Senators McConnell, Mankin, Sinema, Romney, Murkowski, Collins, Graham and others insisting that they join the effort to uphold the Constitution and secure voting rights.

Pick up a pen and write that letter today.

Thanks for that reminder, Joette. Our letters page is always filled with locals' thoughts on important issues, and many of those issues are addressed at the ballot box. Without open, unmitigated access to voting, Americans have a tougher time fixing what's broken and addressing the new challenges. Come on in for your gift card to Palate!