Today
I drove by the yellow tape today. Parking lot empty, Store dark, Do Not Cross, Evil has come too close this place. Super Heroes. Well disguised at 66 years old, as a produce clerk. Why'd you bring a knife to a gun fight? Because it was all I had, to save the world for others. Wait for evil to turn its head, and do whatever you can to end evil. Even at the cost of your life. Rest in peace Donald Surrett Jr. You are a Man among angels 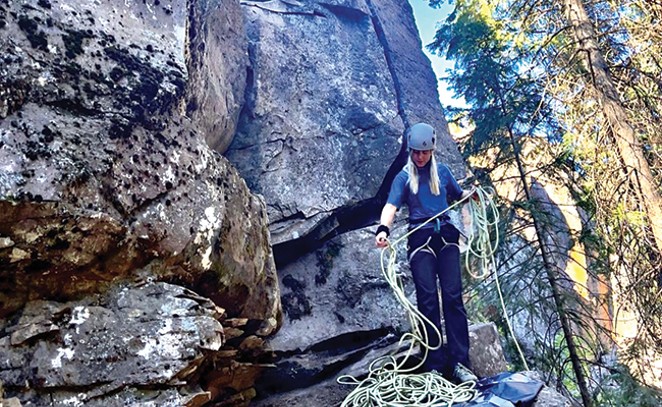 RE: In the Wake of the Safeway Shooting, We Know How This Is Going to Go, Opinion, 8/31

Your Editor's Note and opinion column in the last issue of the Source were beautifully written.  The Editor's Note especially put into words the thoughts of many of us as we tried to make sense of what has happened here in Bend, Oregon, the small community that has become a city, the town that we love. We are grieving with the families of Glenn Bennett and Donald Surret, Jr as their lives continue without these men. You also included the family of the shooter who is living with the reality that their son committed an unspeakable act. They must be grieving too.  Thank you.

Morgan Schmidt at the Drake Park Community Vigil asked us not to live in a way that stamps these horrific acts as "normal" in our society. Your opinion column called for changes in how we view health care, more and better access to mental health care and access to assault weapons in our nation. We do not want these mass shootings to become commonplace, yet here we are as we have been scarred by one just as so many other communities around our nation have been also.   Thank you for your reminder to have hope, hope in tomorrow, hope in our legislatures, and hope in the people with whom we live. Thank you for your poignant and thoughtful words calling for change now and in the future.

Jack Harvel's story about our dropping water table mentioned the cause was prolonged drought and piping of canals. In my communication with the Oregon Water Resources Department they emphasized a third reason, "too many people." Overpopulation is the root of most of our worsening environmental problems and many individuals fail to recognize that fact, or choose to ignore it.

Eliminating lawns, driving electric cars, piping canals will help for a period of time, but eventually there will not be enough water to support a rapidly growing population. This drought may be over next year, or it could be with us for hundreds of years.

President Biden and our Senators must not recognize the threat posed by overpopulation because their inaction on our open borders is allowing two million individuals per year to enter our country illegally. As this policy continues, the demands for water and energy will increase.

Technologically we are a long way from converting fossil fuels to "green energy." Over half of our electricity is now generated by coal and gas.

Editor's note: Thanks for your letter, Kyle, but I'd like to clarify: While U.S. Customs and Border Patrol did report encountering 1,946,780 people at the Southwest border in 2021, that's encounters, not entries. From the Pew Center: "Migrant encounters refer to two distinct kinds of events: expulsions, in which migrants are immediately expelled to their home country or last country of transit, and apprehensions, in which migrants are detained in the United States, at least temporarily." Not quite the same thing as "allowing two million people" into the country. Additionally, from the U.S. Energy Information Administration: "In 2020, hydroelectric power accounted for 50% of Oregon's electricity generation, and all renewable sources combined produced 68% of total utility-scale generation."


Democracy is at stake Please consider the reality of this:

The January 6th attack on our nation wasn't a random act by a handful of sore losers, but a premeditated and organized insurrection. Now, thanks to the hearings, there's overwhelming evidence that Trump and his allies were at the helm of it.

We heard from former members of the Trump administration and Republican state officials about how Trump illegally pressured the Vice President, the Department of Justice, and state legislatures to overturn the election he knew he lost. And when it didn't work, he summoned an armed mob to march on the Capitol Building in a final, violent attempt to stop the peaceful transfer of power.

These insurrectionists haven't gone anywhere. In fact, more than 100 of them have already won their primaries. It's up to us to do our part and vote to make sure they don't win this fall.

Should these dangerous candidates win their elections, we could have election deniers in key seats of power, like secretary of state and county clerk, ready to overturn whatever election results they don't like.

Our democracy is at stake. If we want to hold onto our freedoms to vote, to have our votes decide elections, and to rely on elections to keep our leaders in check, then we have to cast our ballots during the midterms this year on November 8th.

Rune: An important message as election season kicks into high gear. Come on by for your gift card to Palate.