This week's cover image is what is commonly referred to as a "ghost bike." Drawn by our graphic designer Erica Durtschi, it was the image that came to mind most readily when we were discussing our coverage of the Safe Streets Summit happening this coming week. Too many cyclists and pedestrians are hit and killed by drivers every year, even in our own community. Read about that story in our News section, along with the story of a deadly shooting in downtown Bend that left a young college student—a recent transplant and a person of color—dead. As that situation unfolds, expect more coverage that aims to answer the many questions locals have about the young man's death and the arrest of the shooter. It's a heavy load sometimes to dive into these stories, but it's part of our ongoing mandate to dive into the stories Central Oregon is talking about most and to try to make sense of them in our weekly news-magazine format.


Have a great week, Central Oregon. 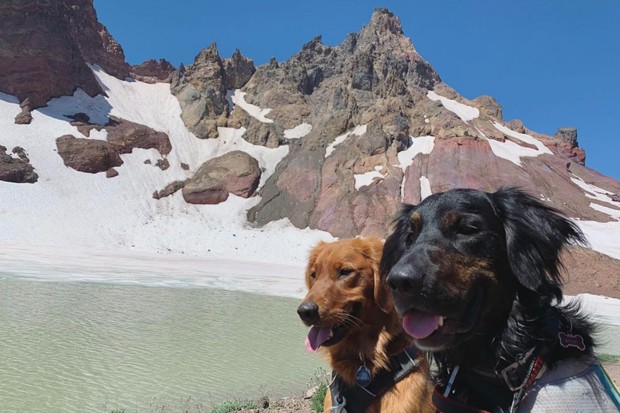 I emailed this message to Governor Brown's office on September 14:


Respectfully, this is more than an opinion. It is an admonition of the State's irresponsible abdication of COVID health/safety/ stewardship in the context of the new mask mandate implemented in August 2021. You have apparently rescinded previous executive orders pertinent to enforcement of masking rules vis-a-vis customers/patrons by businesses, merchants, venues and employers. Previous OSHA guidance on how businesses can enforce these rules have now vanished. As a result, the prevalent attitude by businesses, when facing situations in which customers fail to or refuse to wear masks is, "Well, I am not the mask police." What a tragic turn of events. Here in La Pine, non-compliance of masking rules by customers/the general public is at alarming break-through levels. This is unacceptable. The State must re-implement enforcement guidelines and support. Otherwise, the State defeats the purpose of the mask mandate by addressing enforcement only of employees; you meet the problem only half-way, at best, by ignoring enforcement with respect to customers and the general public. It is all the more bewildering that outdoor concert venues can require proof of vaccination for entry, and that health care facilities can enforce masking rules, but restaurants and merchants cannot.

Interesting how these people have failed to the point they are homeless, and when they are given this chance...wallah!....they become non drinking, non-drug using, honest, sanitary little homemakers.


Naw, it doesn't work that way.

I am relieved to hear the U.S. has infinite water, energy and monetary resources to accommodate millions of new migrants to our country. That appears to be the mindset of Governor Brown, Senators Wyden and Merkley, President Biden and numerous citizens. All seem to support, or enable approximately 200,000 illegal immigrants to cross our borders each of the last three months and invite thousands of Afghans to be flown from their country. (Mitt Romney on CNN indicated about 50,000.) We often allow refugees to enter the U.S. when a country has a war involving the U.S., or a natural disaster. We took in several thousand from El Salvador and will probably allow many Haitians in after the recent hurricane. Cuban refugees have settled in Florida. According to the U.N., our population will increase to about 380 million in 2050, up from the present 330 million, much of it due to migration. That works out to be about one million per state.


It does seem odd that these same leaders are telling us we have a housing shortage and record debt and we need to economize on water (piping of canals) and energy use and limit driving because of global warming. If these restrictions are necessary now what will be the impact of having 50 million additional individuals who will need housing, add to our debt, require water and energy and probably need to drive a car.

Our grandchildren will find out.

I call bullsh&$ to Visit Bend's "Sustainability" grants. It's just another marketing ploy. Nominate your favorite project, and if it gets funded, Visit Bend will overly promote it as a grantee. Another lame excuse to feel better about whoring out Bend.

This is invaluable. Thank you to this group of women. Facilitating an approach to a universal life event that meets it with softness, acknowledgment, support and tools.


Our society balks and turns away from this inevitable part of life, one of the most important parts. As an RN, I too, have witnessed many deaths including my own family members. Being ready, prepared, supported, and allowed to grieve is so important for the people left behind.

Thank you for your work.

Grief is love with no place to go...

When I heard that the World's Worst Loser said that General Mark Milley should be charged with treason for calming reasonable Chinese fears of a possible military attack by our power-mad, democracy-hating Divider-In-Chief, an old adage came instantly to mind: "People who live in glass houses should not throw stones." Do he and his Congressional puppets really want to bring up the "t" word? After January 6th? Really?

A Well-Run Camp for the Houseless

I appreciated Renee Alexander's positive contribution to the conundrum of how to work with our houseless folks and want to add another model that seems to be providing a "well-run camp," complete with regulations and an on-site camp manager. I drove by what is called a Safe Camp in Corvallis, OR, and it was clean, contained and had the manager site located front and center. Information on this program can be found at https://corvallisucc.org/safe-camp/

Gina—Thanks for bringing more information to our readers about a topic around which there's been less than stellar messaging. Come on by for your gift card to Palate, and thanks for reading the Source Weekly.