As journalists, we are advised to keep ourselves out of the story and to focus instead on the people affected by any given issue. This week, in our nation's Capitol, the focus of the ire (and outright insurrection) was lawmakers—but also affected by the fear and chaos were the many journalists covering the certification of the Electoral College votes. They, too, hunkered down in terror, and some even found themselves targets of people who, for the past four years, have ascribed to the belief that we are "enemies of the people" out to spread "fake news." If you're reading this, I hope you're among the many who have paused this week to consider the importance of real, trusted and verified information, because the information that spurred the Capitol riots was anything but that. When journalists become part of the story, something has often gone terribly wrong. 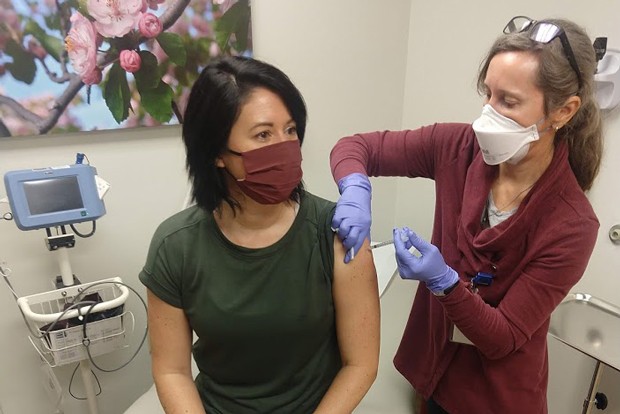 Real journalism is a profession that compels us to ask questions, talk to those affected by the stories we tell, root out facts, verify and re-verify information, and to come to the closest approximation of the truth that we can find before we put our work out to the public. It also compels us to correct ourselves publicly and quickly when we make a mistake. From all of us who believe and live by these tenets, I'd like to say a thankyou for picking up this newspaper or reading us online. I hate to even have to say it following last week's spectacle, but real news really does save lives.

RE: Teletherapy: Will it survive the pandemic? News, 1/7

When we say there is a stigma to mental illnesses, aid or abet those who do, whom are we helping except those trained to say it?

Riot at the Capitol

My father fought in three wars for this country and gave his life due to military service. I fought in one. (That was enough.) That used to be patriotism.

This is tragic beyond imagining.

The actions in Congress of our newly sworn representative, Cliff Bentz, have only served to cement this last meaning. Does he not see what's happening? Does he not understand the danger? Will he do nothing to reverse course?

WHAT DO YOU STAND FOR, CLIFF BENTZ?

Well, look at you, Mr. Representative. You were sworn in on Sunday to uphold the Constitution, yet three days later, you vote to cast it aside.

This is unacceptable. You are not beholden to (the waning days of) President Trump and his unfounded and conspiratorial assertions about the election. He lost. Get over it. The votes and certification processes of each state were legitimate. You know this.

You represent my District. I expect you to do so with honor and integrity. Within three days you have failed. You should be ashamed. How can I trust you as my Representative? Find the courage to not mindlessly slip-stream behind the likes of your irrational conservative colleagues. Find your soul and begin to listen to all your constituents before you find yourself in two years wondering why you didn't get re-elected.

I am shocked at the events that unfolded in Washington, D.C. on Jan. 6. Our Capitol was assaulted by a seditious mob. Five people have died. Pipe bombs were found by the Capitol. Our Constitution and our legal system were damaged by these events.

But let's not forget how this all started. President Trump for months has been spreading lies about the election. Despite losing 59 out of 60 court cases, despite having no evidence of significant voter fraud and despite the fact that his opponent won by more than 7 million votes, Trump continued to promote his false narrative that he won the election.

I hold Trump responsible for these deaths, damage to our Capitol, and more importantly the threat to our democracy. He needs to be held accountable.

However, I also hold Congressman Bentz responsible for the seditious events. Bentz voted to void the election results. He has repeated many times the same lies about the election as Trump.

We should not forget that Bentz was attempting to overthrow a legal election and to disenfranchise American voters.

On his website, Bentz says: "America is not just a country; it is an idea. A very successful idea that no one else in the world has been able to duplicate. Under President Trump's leadership, the possibilities for our country's future have expanded quickly and dramatically."

At least in one way, Bentz is correct, under Trump the possibility of our country being overthrown by coup are possible.

I don't say this lightly, but Bentz should be removed from office for violating his oath to protect our country and our Constitution.

Cliff Bentz, Representative from Oregon, was one of the people supporting the coup by voting to disenfranchise the vote. He needs to be removed from office, charged with sedition, and prevented from ever holding public office again.

Those who participated in the mayhem at the Capitol last week are not, and never can be, Patriots. To be a patriot you must live in the country of which you profess your love. None of the people belonging to or subscribing to the organizations of the far right and their misguided, paranoid sentiments actually live in the USA. Instead, they live in a country existing only within the narrow bounds of their feeble, collective mindset.

They pledge allegiance to a fantasy country which resembles the United States in name only. This fantasy version of the USA and its angry, misguided citizenry routinely claim to be oppressed for their righteous and noble cause. What cause is that? The only one I can see is one that seeks to injure, dominate, ridicule, bully and oppress anyone who doesn't agree with them. That's not a cause; it's a petulant, overblown sense of entitlement that comes complete with a pseudo-religious fascist, racist fascination with violence.

The deep divisions endangering our country today have been cultivated and nurtured for decades. Demagogues broadcasting their vitriol over the airwaves and the internet have done their damnedest to tear this country down and remake it in their own image.

The Constitution has been hijacked, misinterpreted and replaced with a Cult of Personality that cannot and never will be the equal of Democracy.

Democracy. Look it up. Read about it. Educate yourself. Then take a moment from your busy life and participate in YOUR Democracy.

Woody: Thanks for writing in and encouraging others to participate in our democracy. From my perspective, one part of that participation is writing letters to the editor to share your thoughts in your own community—so kudos to you for doing so! Come on by for your gift card to Palate.