Every time an earthquake (or tsunami) happens off the Oregon coast, people begin to wonder once again, "Is the Big One coming?" It's coming—but no one really knows when, or even if it's going to be during our lifetimes. Still, Central Oregon is preparing, not necessarily as a place where we'll experience damaging shakes, but as a place where people will come when it's done. Jaclyn Brandt's story on how that preparation is coming along is this week's Feature—aptly timed after a tsunami from a volcanic eruption in Tonga this week prompted brief advisories for the Oregon coast.

Our coverage continues with some news about where to get more COVID tests (hint: your mailbox), a new brewery for Sisters, a new round of grant funding for artists and how a local outdoors group is empowering people of color to try new activities. Thanks for reading and have a great week!

Our land use rules in Oregon have good intentions behind them. But in the hands of people with money, they can be weaponized to economically segregate our cities.

Bend YIMBY has been following a proposal to build some homes (duplexes) on Awbrey Butte that the neighbors have been fighting tooth and nail.

Why "build multiplexes rather than classy single-family homes?"

"Awbrey Butte was not built for high density. Why? For high end large homes on large lots" [sic]

"We want the developers to plan single-family residences on 12,500 sq. ft. lots"

"The current Awbrey Butte neighborhood is a highly sought after place to live, and would cease to be so in the future with the addition of the large number of tenants the proposed development would bring, thus lowering the property values significantly. We bought this home as an investment and expected it to continue to retain it's excellent property value far into the future." [sic]

The desire to keep out "inferior" duplexes is clear, but thanks to Oregon's HB2001, those homes are legal, by-right. 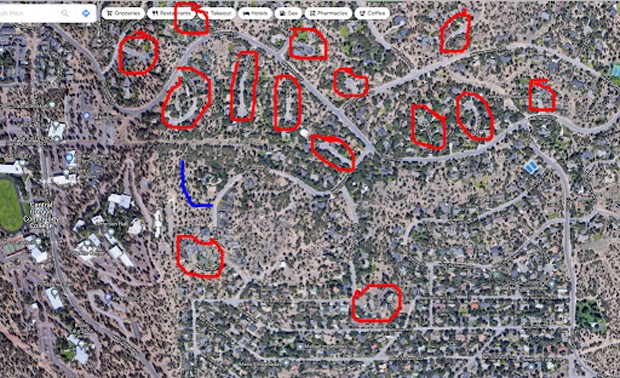 So the residents did some digging, and found a rule – "Street Connectivity and Formation of Blocks standards" – that is in place to provide better street connectivity.

It's a good rule! There are places in Bend where cul-de-sacs, rather than connected streets, mean long walks between adjacent lots. The city is right to discourage that.

However, the homes under consideration are on a steep portion of Awbrey Butte. A street grid—or even a simple loop—won't work there.

Do the neighbors really care about street connectivity? Included with this letter is a map.

The proposed cul-de-sac for the new homes is marked in blue (approximately). Existing cul-de-sacs in red.

They have paid top dollar to live in an area with a large number of cul-de-sacs! But this is the rule they found where the developer is not 100% in compliance, and an exception to the rule is required for the development to go forward. So they are weaponizing it in order to try and stop or slow the development.

The more time and legal expenses they can throw at stopping these homes, the more likely the developer either gives up and sells the land, or accedes to their demands and builds very expensive houses rather than duplexes.

City staff must follow the letter of the law, and so this objection must go through the process. If you guessed that this will cost the developer more time and money, between legal fees, city fees and delays, which will then be included in the price of the homes being built, you guessed correctly!

We should strive for more, rather than less diverse neighborhoods in Bend, and we desperately need more homes of all shapes and sizes. Our land use laws should serve to create a great place for everyone, rather than as a cudgel for the wealthy to exclude others from "their" neighborhoods.

— David Welton is a chapter lead for Bend YIMBY, a chapter of YIMBY Action , a 501(c)(4) nonprofit organization.

Wake up! Our government and news media have totally politicized "climate change" to reflect that humans are the sole cause of global warming and humans can fix it. Neither premise is valid. Recent books by world renowned scientists, Steve Koonin and Bjorn Jomberg, demonstrate how we are being misled by the reported science (eg. UNIPCC). Few people know that on March 7, 2019 Senators Schumer, our own Merkley, and others introduced Senate Bill S729 which stated in part that no federal funds could go to anyone who challenges the "scientific consensus on climate change." Fortunately this did not pass. Science that cannot be questioned is propaganda. Due to new satellite systems we have been able to determine that the Earth is getting bombarded by more radiation than previous recorded history (see NASA data). Recent Danish studies have concluded that the magnetosphere has lost over 15% capability to protect us from radiation, mostly in the last 30 years. They conclude that the breakdown of the magnetosphere is "a significant cause of global warming" (Danish National Space Center). At this time, scientists cannot accurately quantify the global warming caused by humans versus the natural causes. Thus, targets for temperature reductions are arbitrary and sometimes capricious (California?) We do need to focus on adaption, but not sacrifice our economy to do so. Protecting water resources and our oceans must be the highest priority. Do we trust the politicians to this?

This is excellent to see. I keep hearing "nobody would want camps or shelters near their home," but I disagree. I work with our neighbors in the forest in Sisters, and they are just that, our neighbors. If we started embracing them instead of constantly pushing them away and out of sight further away, we'd see positive change and be able to all move forward together. This is a great step in the right direction, thanks to everyone involved.

Thanks for your positive response, Mandee! You get letter of the week. As we take time out this week to honor the life of Dr. Martin Luther King, Jr., I'm reminded of his musings on the "beloved community," and our commitment to one another.