Anything big going on this week? I kid. 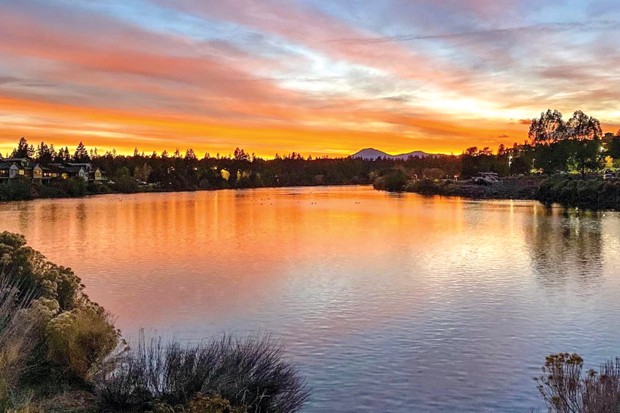 As I write this, it's Tuesday afternoon and myself and the rest of America are looking to Wednesday, when a new president will be inaugurated and another one will fly away without attending the festivities.

In Salem, members of the National Guard are on hand to boost security at Oregon's capitol building, due to the threat of protests at all 50 state capitols on Inauguration Day. Today, in what was supposed to be the Oregon Legislative Assembly's first day of the session, lawmakers are barred from entering the building, a cautionary measure in light of the protests. As the Oregon Capital Insider's Dick Hughes pointed out, ironically, one of the meetings canceled due to this is the Senate Committee on Human Services, Mental Health and Recovery. I share his sentiments about Oregon needing plenty of mental health and recovery right now.

It is my sincere hope that Inauguration Day remains peaceful in Oregon, in Washington, D.C., and elsewhere. This is one time when this journalist is hoping NOT to have to report big news.

Local irrigation districts and the city of Prineville all withdraw water from the Deschutes River and are seeking a legal shield from the Endangered Species Act.


In the Deschutes Basin, Oregon Spotted Frog, Bull Trout, and Mid-Columbia Summer Steelhead are all covered by the Endangered Species Act.  The Act requires that a recovery plan be put in place and that activities that will kill ("take") these species be covered by an "Incidental Take Permit" (ITP).  In other words, it's OK to kill endangered species, but only "incidentally."

After 12 years the irrigation districts and City of Prineville have delivered a Habitat Conservation Plan (HCP) that has been deemed at least partly acceptable by the US government (the decision on steelhead has not been made).

The latest version of the HCP has improved significantly from its truly laughable beginnings.  The applicants (irrigators and the City of Prineville) have put significant effort into crafting a plan that would result in the issuance of an ITP.  The HCP now has some merit, but there are good reasons to believe that this plan will not lead to recovery.

The problem is that species need more water than planned, and they need it much more quickly.

In addition, other problems with the plan are the outrageous cost of canal piping (overwhelmingly funded by taxpayers), the omittance of the Middle Deschutes in any meaningful manner, and the complete lack of consideration for water quality.  Our rivers need more water, but it can't be severely polluted like it is in the Crooked River and Lake Billy Chinook, home to bull trout and steelhead.

There is a bigger picture that is ignored. Our climate is clearly heating.  Wickiup Reservoir will not fill again this winter, in fact it will likely start next irrigation season at its lowest level ever.  Central Oregon has been in a state of drought for most of the past 20+ years, ranging from "abnormally dry" to "extreme."  At the same time our population is booming and our aquifers are declining to the point that some residential wells are going dry.

The merits of canal piping and on-farm efficiency are undeniable, but they are expensive and will take decades to provide marginal benefit to the upper Deschutes, Wychus Creek, and the Crooked River, and no real benefit to the Middle Deschutes.

Oregon water laws were written over 100 years ago at a time when the state was being settled.  Are these laws still appropriate?  What is the most beneficial use of the public's water today?  Clearly, agriculture plays a critical role, but should it get 90% of water use?  How can we shift the discussion to making equitable, fundamental changes rather than merely quibbling about which tactic is best for spending massive amounts of taxpayer dollars to achieve minor benefit over decades?

Currently, it seems we are simply rearranging deck chairs on the Titanic.

—George Wuerthner is an ecologist and has published 38 books on environmental and natural history topics. He is a former river ranger with the Bureau of Land Management who has advocated for rivers for decades. He is currently ED of Restore Our Deschutes and also on the board of the Montana Rivers Action Network.

The reopening of the schools in February teaches the children of Central Oregon an important lesson before they set foot back in a classroom: It's OK to ignore good advice, unless someone actually forces you to follow it. As soon as Governor Brown announced that common sense rules to stem the spread of a deadly pandemic are "advisory" rather than "mandatory," the district reacted. To restate Brown's advisory: "It has become clear that when community spread is reduced and schools follow required health and safety protocols, there is low risk of transmission and illness when students resume in-person instruction." This advice is in the form of an if-then statement, but the Bend-LaPine district has jumped straight to the "then" portion without dwelling on the "if" premise. If community spread is not in fact reduced, but instead is at an all-time high, as is currently the case in Central Oregon, then the "back to school" part no longer follows. Nevertheless, the district, hearing what it wants to hear and disregarding the rest, is reopening. It's often OK to let natural consequences teach a hard lesson to children about ignoring good advice, except that in this instance the natural (and inevitable) consequences will cost lives, and the people who are making the decision to reopen in-person learning are not children. The district needs to reconsider.

What is the purpose of the bottle recycling law? The purpose has been lost in the massive program. Citizens are forced to (1) pay tax on bottles, then (2) collect those bottles, then (3) take them to a nasty stinking facility, then (4) wait in a line before actually spending precious time feeding the machines while standing in puddles of beer and soda. And oh yes, the facility is a hangout for bums and troublemakers. It's not worth it. My bottles are going in the trash.

A Tip of the Hat

Through lack of participation in OUR democracy we have allowed the Constitution to be battered and bruised, misinterpreted, corrupted, diluted and misused by any narcissist with a political agenda.


The Fairness Doctrine of the Federal Communication Commission, introduced in 1949, required broadcasters to present information to the public in an honest, equitable and balanced manner. This doctrine was eliminated in 1987, paving the way for the distribution of misinformation, half-truths and lies shamelessly hucked to the masses by a few loudmouth hucksters, (Rush Limbaugh I am looking at you!). Misinformation has increased exponentially with the arrival of Social Media platforms. It's not the fault of Social Media or Media in general. It's our fault for how we use them. It's worth noting that being able to hide behind anonymity pushes the tendency to lie and deceive further than it has a right to go. It's also worth noting that 8kun, with its notorious, anonymous Q Anon has done great damage to the already weakened foundations of Democracy with its particular brand of vile falsehoods and toxic hate.

So speak up! And remember to LISTEN too.

But Civil Society demands civil behavior. Democracy demands citizen participation. If I can take a moment out of my busy life and speak up for what is noble and just then so can you.

I tip my hat to Woody Peasas who wrote in last week encouraging us all to participate in OUR democracy.

Thanks for your letter, Michael. March on down for your gift card to Palate!