This week, we've carved out some of our precious pages to bring you a topic that most Central Oregonians can agree on: We heart pets. In the midst of a pandemic—and recent wildfires—pets have been our solace, and also a source of stress and worry for those who had to evacuate without them . Check out more 2020-style pets stories starting after page 14.

And even while we do that, it's crunch time for elections—so our feature story this week aims to answer some of the most common questions asked of our local county clerk. If you're wondering if the signature on your ballot will cause it to be thrown out, for example, we're offering some peace of mind about what happens in those cases.

Meanwhile, we continue to watch the ongoing protests and responses around racial justice and police accountability in our region, aiming to offer a more thoughtful narrative in future issues. For those looking to engage with that topic right now, this week, the City of Bend is hosting a listening session on policing policies in the city. Locals can take part in that—and take part in the comment section—by joining in from 9 am to noon on Saturday., Oct. 17. More info is available on the City of Bend's website, bendoregon.gov.

For more than 30 years, conservation organizations from across Oregon have struggled to work collaboratively, to pen a Bill for Oregon's last-best-place, known as the Grand Canyon of Oregon.

The nearly 10,000 square miles that make up Oregon's second-largest county are home to thousand-foot canyons; one of the darkest and most remote areas in the lower 48; over 350 species of animals and 28 rare plants, only found there.

Over 790,000 acres were designated Wilderness Study Areas in 1992. Again, in 2001, BLM designated over 500,000 acres as "Areas of Critical Concern." However, problems exist implementing proper management of these non-Wilderness lands.

The Vale District, BLM, the land-management agency, recognizes over 1.2 million acres as Lands with Wilderness Characteristics. Existing administrative land designations are inadequate. Vast areas without proper management are at risk of further degradation from invasive annual grasses, lack of a Travel Management Plan and a Resource Management Plan that is out of touch with today's threats.

The value of backcountry lands should be realized beyond cattle grazing. The multiple use doctrine has failed. An astonishing 94% of the 78 grazing allotments that have been surveyed to date are failing to meet rangeland health standards. The sagebrush steppe is ecologically out of balance. These standards were created by the Advisory Council (SEORAC), within the very agency that oversees and advises management of our public lands.

Many, from just across the county line, and one of the fastest growing metropolitan areas in the west—the Boise, Idaho, metropolitan area—have found the Owyhee's remoteness just outside their backyard. With large expanses suitable for off-road exploration, with little enforcement, most weekends, the OHV traffic exceeds vehicle traffic.

Bozeman, Montana-based, Headwaters Economics, a non-partisan think-tank and research organization, has published many reports on recreation and our federally protected lands.

Traditional uses like hunting and fishing are an important factor, as well. A recent Pew Trust study showed hunting, angling and wildlife watching on BLM lands contributed over $1 billion in salaries and wages, supported 26,500 jobs, and produced over $421 million in federal, state and local tax revenue in economic benefit.

A newly formed group, Sportsmen for the Owyhee (owyheesportsmen.org), has continued to engage with local elected officials, grazing permittees, landowners and other stakeholders trying to find a way forward with permanent protections for the Owyhee.

We must reach out to our elected Representatives in Congress, and tell them the Owyhee is worth protecting.

On October 7, City Councilors voted in favor of language proposed to establish the Human Rights and Equity Commission; all but one! In an act of remarkable petulance (and consistency!), Bill Moseley voted against the change in testimony to his "principles." The purpose of the commission, he maintained, was unclear.


I, for one, was happy about this historic legislative step towards protecting our community's well-being. But, equally, I am glad that Councilor Moseley voted as he did. His vote served to remind us that in our midst there remains an obdurate constituency, unconvinced that human rights and equity demand special focus, and additional institutional protection in this time of growing intolerance.

I often go on hikes in Bend and see plastic bags with dog poop inside left on the trail. I would love to know the point of this. Do the dog owners think there is someone who works for the Bend Park & Recreation District whose sole job is to pick up these plastic bags? Does the dog poop and plastic bag disintegrate faster than if the owner had just left the dog poop there? I need someone to explain the logic of this weird habit some dog owners have.


I am not a dog owner, so I have not walked in your shoes.

Curious to say the least.

I personally took both of these images with my iphone this week: 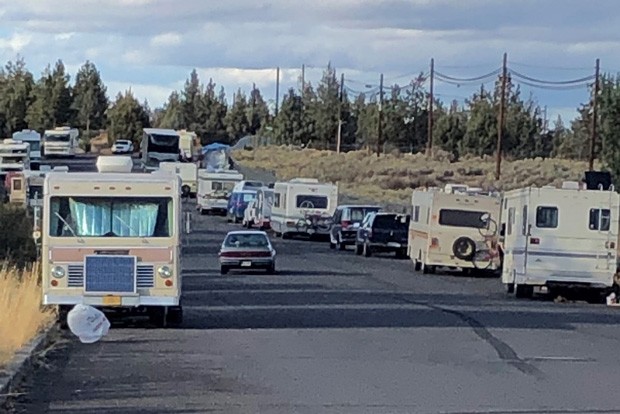 One of many informal homeless camps on our community streets. 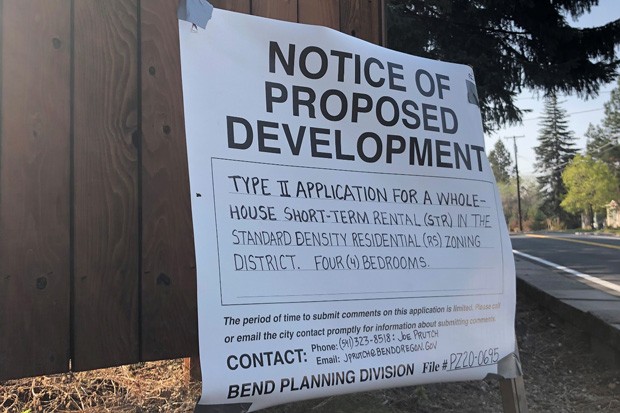 A new application to turn an entire single-family home into a Short-Term Vacation Rental, allowed by Bend City Code.

Our city still approves NEW applications to convert single family homes into "hotels", which earn up to, and even over, 10x the annual amount that can be charged to a long-term tenant. This drives up rents and contributes to the housing shortage.

Our growing homeless population has been forced onto our community streets, in tents and RVs, because of our housing shortage.

If you, too, are troubled by the co-existence of these situations, please take five minutes out of your day to request that our city council revisit and revise short term rental allowances, and/or put a moratorium on new applications until we can develop a more sustainable management plan. Here are their email addresses:

Tamara: The photos included in your letter do speak volumes. Thanks for your input and suggestions for our readers—come on in for your gift card to Palate!