Guest Opinions: With My Sights Set on Liberation & We Need a United Front to Dump Trump and Expand Democracy

This week, inside these pages, we attempt to answer one of the burning questions during this pandemic year: Is Halloween really canceled? And more importantly, will kids tolerate not getting loaded up with piles of candy?! Among other news and commentary that could probably be categorized as more hard-hitting, we attempt to answer that question with some insight from local parents. It's certainly a conversation around my house... along with how long—and short–it seems before this election is decided, and what our political landscape will look like once this important vote is behind us. We hope our "My view" series, featuring ongoing, long-format video interviews with local political candidates (which we're excerpting in this and other issues), is just one tool in your overall toolbox, helping you make choices on your ballot this year. Look for our endorsements in our Oct. 22 issue, and see all of those videos at bendsource.com/bend/elections. 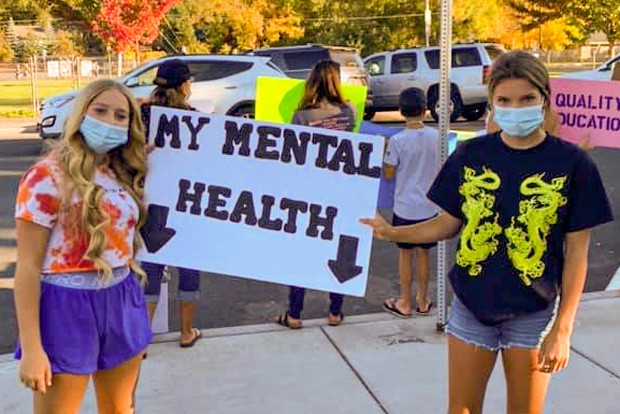 Guest Opinion: With My Sights Set on Liberation: A response to this weekend's actions (and aftermath) at Pilot Butte


How can I practice solidarity without deindividuating? When we deindividuate, we risk sacrificing our humanity to the calls of the hive mind, we are shamed into sacrificing ourselves or be othered, again by the "other side." White supremacy has an insidious tactic of monolithing people of color, of centering only one truth (often the loudest) at a time that serves its destructive purposes. White supremacy places us all in a pressure cooker and allots us only one monolithic voice—resulting in the binary that you are either a white supremacist or an anarchist. This is a false truth and as a person of color, I won't subject myself to it.

This binary serves to erase every individual, critical thought from the liberation movement and present it as chaos and anarchy, and I hope to create space here in Bend for dialogue for people of color and other intersectionalities that may otherwise feel pigeon-holed or erased by the current binary.

Locating self in the liberation movement helps place each of us in our work. If we practice locating ourselves from a place of "race and..." we center racial injustice and also commit to follow the paths of the intersectionalities and nuance that lift up our diversity within the movement. If we really want to get closer to what makes us angry with the current systems, locating self can serve as a jumping-off point to practice holding multiple truths from a place of humanity.

I have no doubt that this will be read by some white folks and they will want to use my words against my people to perpetuate their racism. I am not here for that; I will not be weaponized against my own BIPOC community.

I have no doubt that this will be read by some of the loudest BIPOC community members and they will want to cast me to the side in punishment for distracting from the cause or airing our dirty laundry in front of white folks.

But ya'll—I am angry. I am angry at the binaries offered to me in order to participate in public discourse. I am angry at white supremacy. And so, I turn to locating myself in this movement. How can I practice solidarity as a dissenting individual? What about nonviolence?

Solidarity as a sense of unity that is expressed through accountability, through deep love and through actions of help and support. Solidarity as a bond that unites a community together in honoring each person's story in dignity.

Nonviolence as a practice of engaging with violence and disrupting it, ensuring that violence, harm and injustice does not occur. I understand that sometimes you need to cuss a motha' out. And also, there are other ways, too.

I don't have answers, but as Adrienne Maree Brown says, "questions lead us to more interesting, honest places than answers."

Guest Opinion: We Need a United Front to Dump Trump and Expand Democracy

"Voting," said the late historian Howard Zinn, "is marginally useful. But it is a poor substitute for democracy, which requires direct action by concerned citizens."

It's a strategic vote—and the only vote that will dump Trump.

"I can loudly say all the things Joe Biden was wrong about," Coates explains," and not feel guilty about voting for him. Me casting a presidential vote is not the totality of my political action within a society."

All social progress comes from mass movements and the power of people in motion. If Biden is elected, we need to light a fire under his feet and demand freedom, equality, justice and peace.

I have voted in every presidential election since 1968, mostly for third-party candidates. Not this time. The stakes are too high. There is a difference between Biden and Trump. To deny that is to ignore Trump's devastating impact on people of color, LGBTQ, people with disabilities, workers and their unions, the poor.

Four more years of Trump will bring much more pain and suffering to millions, crush what's left of a tattered and never fully realized democracy, and usher in fascism.

A Biden administration will provide progressives room to take direct action and organize a mass movement that can challenge racism, sexism, homophobia, war, climate change and capitalism itself and push for fundamental social change.

We are already seeing what a second Trump term will bring—white supremacist vigilantes killing peaceful protesters; physical intimidation of voters at polling places; Trump goading his supporters like the terrorist Proud Boys into armed insurrection.

We can't wait until election day to act. We need a mass outpouring of people—millions of people—demanding fair elections, defending the idea of democracy, resisting authoritarian rule.

We need a massive popular vote for Biden in all states. A vote for any independent or third- party candidate helps Trump.

There are organizations working to build a united front leading up to election day. Sasha Abramsky's recent article in The Nation addresses this: thenation.com/article/society/trump-coup-elections-gop/

Central Oregon activists need to be part of this movement organized by Indivisible and Stand Up America. Go to protecttheresults.com for more information.

In the meantime, when your ballot comes in the mail, hold your nose if you have to, but vote for Joe Biden. Like Bob Dylan said, "Stop all this weeping. Swallow your pride. You will not die. It's not poison."

I have enjoyed the in-depth reporting presented by the Source on various issues and columns by Jim Anderson.


Recently I note that the letters to the editor are almost exclusively slanted to, or support laws favoring banning of fossil fuels (climate change legislation), marijuana use, identity politics, BLM, and are negative to everything Donald Trump.

I hope the Source will go back to presenting both sides of these issues in order to stimulate intellectual thought. Otherwise the "letters" page is nothing but pablum for lazy minds & haters.

John: Your suggestion is noted—however, I feel it's important to point out that we print most letters (provided someone has not submitted another letter recently). Could it be that our readers, by and large, support climate change legislation and the other things you mentioned? In any case, we welcome respectful dialogue, and in that vein, I award you letter of the week. Come on in for your gift card to Palate!