I can't lie: Seeing case numbers drop sharply and hearing that Gov. Kate Brown had relaxed restrictions on Deschutes County starting this week was some of the most welcome news I've received in a long while. 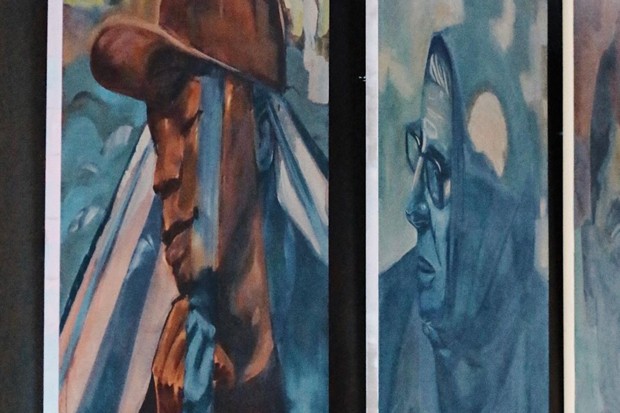 And since we're the Source Weekly, home to a staff that loves to revel in all the food, music, culture and outdoor entertainment there is to offer in Central Oregon, there may have been some club-worthy dancing going on when we first read the governor's press release. This virus has done a number on each of us in many ways... and while we're not able to declare victory and to return to life as it was in the before-times, these milestones definitely are cause for a little club-worthy dancing. Until we can dance in clubs again, and I and my staff can fill the Source Weekly calendar with so many fun "Picks" that you'll be hard pressed to keep up, we'll embrace these little milestones. Here's to your health, Central Oregon!

I was born in Missoula, MT at the confluence of two wild rivers, the Bitterroot and the Clark Fork, which imprinted their beauty on me at an early age. As a child, my mother taught me to fly fish on the banks of the Gallatin River. These early experiences on wild rivers inspired me to get degrees in Aquatic Biology and Marine Ecology, which led me to a career in freshwater and marine systems, as well as stormwater management, in four western states including Alaska.


I currently live on the rim of the Deschutes River, which I often refer to as the "prettiest irrigation ditch in the world." Watching this river shrink down to mudflats each winter motivated me to get involved with the Upper Deschutes Watershed Council, an incredibly hardworking organization that I've been honored to serve on the board of for over 20 years. Watershed Council staff educate hundreds of school-aged kids in Central Oregon each year about the importance of free-flowing rivers and creeks, and have devoted years of time and effort to restoring degraded reaches of Whychus Creek.

Tributaries like Whychus Creek are the saving grace of heavily manipulated rivers like the Deschutes. Because the creek's lower reaches are spring fed, it pumps cold and clean water into the river, which helps keep river temperatures down. It provides excellent habitat for native redband trout, which depend on smaller streams to spawn and rear young, and is already becoming a promising location for salmon and steelhead restoration. Protecting and restoring streams like Whychus Creek is absolutely critical if we hope to restore important native fish back into the Deschutes Watershed.

For all these reasons, I've eagerly observed the Watershed Council and partner organizations' work over the years to restore flows and improve habitat along Whychus Creek. It's encouraging to see the creek be restored to its natural state, and to watch populations of native fish return as the work progresses. Tributaries like Whychus Creek are one answer to the question, "What do we need to do to ensure we still have native fish runs in a climate-changed future?" But to ensure they're still around when we need them, they need to be protected.  Whychus is one of many waterways that needs and deserves to be safeguarded for the future, which is why I strongly support Senator Wyden's efforts to grant Wild and Scenic status to more rivers and streams in Oregon.

Don't believe Oregon won't tax the two rounds of relief stimulus money you received. If you itemize deductions on Oregon state taxes, Oregon will take 8.75% of that money when you file taxes.


When itemizing deductions on Oregon's tax return, Oregon law allows a subtraction (deduction) of federal income taxes from Oregon income. Individuals can deduct up to $3,475, and joint filers can deduct up to $6,950, depending on the filers' 2020 federal tax bill. If you received stimulus money, Oregon requires you to reduce the amount deducted for federal taxes by the amount of stimulus money received.  Effectively, your Oregon income is increased by the amount of the stimulus money received, and an additional 8.75% of that money will go to Oregon.

Why? According to the Oregon Department of Revenue, it's because the federal government didn't send the money as income; they called it an "advanced tax credit" to keep it from being considered income and taxed on the federal side. Oregon used that wording to claim the "credit" reduced your federal tax liability, effectively increasing your Oregon income bottom line. Furthermore, it's not even equally "taxed." Only those who itemize get hit with this!

So, get ready family of four homeowners who lost income this year and used the money to keep up with the mortgage. Your Oregon tax bill could go up as much as $506.

This money was never intended to increase taxes.  Shame on Oregon!

Joe Biden has repeatedly spoken of the need for unity.  What was unclear, however, was the real object of said unity.  Most patriotic Americans desire to be united as a nation and governed by a democratic process that resolves policy differences through bi-partisan negotiation and compromise legislation, rather than with partisan attacks, demonstrations, investigations.


So how does the impeachment of an ex-president, for whom almost half the nation voted, promote an amicable legislative process and Biden's call for unity?  (Such unjustified hatred and vilification of a former President by the opposition I have never seen in my lifetime.) Does this unnecessary action square with Biden's statement that he wanted to be the President of everyone and not just Democrats or Republicans? Do his forty plus Executive Actions, most of which undo or undermine policies enacted under President Trump, promote unity?  Many of those policies, such as border control and protection of the unborn were popular with, and desired by, those who voted him into office in 2016. Also, how do Biden's occasional, disparaging remarks about the previous President or his policies promote unity?

Since Biden's actions are inconsistent with his call for unity, one must ask about the rationale behind them.  I think one can easily conclude that they are partisan actions meant to satisfy the demands of his radical, Democrat base, which thus becomes unified.  Beyond that, don't expect any more unity – unless the Republicans decide to conform to the legislative demands of Biden, Schumer and Pelosi.

The Republicans are saying Donnie Boy can't be impeached because he is no longer in office and is now a private citizen. Simple, just arrest and charge him with inciting a riot. My bet, the Republicans would then scream, "but it happened when he was in office and therefore can't be arrested now!" They will continue to stand by their cult leader.

Ronelle: I had hoped the chatter around #45 would start to die down by now—but taking a look at this week's crop of letters shows it hasn't happened quite yet. Come on by and grab a gift card to Palate—maybe some caffeine will help us all think of something else to talk about!