Guest Opinion: An Open Letter to Central Oregon's Local Media and Our Community

I don't think I'm alone in saying that spring is one of my favorite times of the year. Snow left in the mountains to enjoy at our leisure, dry roads to bike upon and little bugs and buds just beginning to strut their stuff... there's so much to love about the rebirthing of spring. 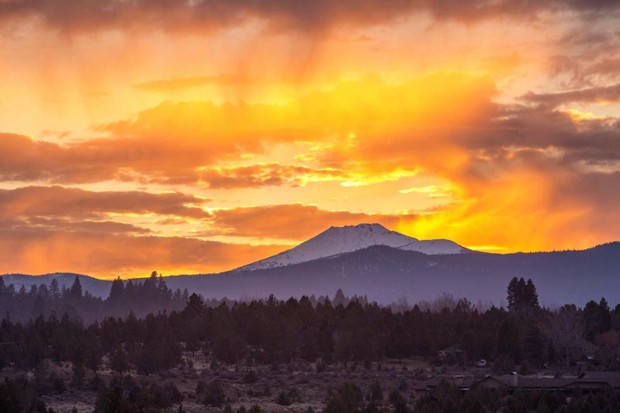 This week's issue contains a few gems that highlight the beauty of the season, including a tip sheet for new gardeners in Central Oregon and a look at some of the hidden (or not-so-hidden) garden gems in Bend, along with a review of some of the trends occupying the indoor spaces of local homes.

Our news section includes some stories focused on "rebirth," too, with coverage on the return to full-time classroom instruction for local students and news on how to register to be informed when it's your turn to receive the COVID-19 vaccine.

Happy spring, and have a great week!

Guest Opinion: An Open Letter to Central Oregon's Local Media and Our Community

In response to Central Oregon's local media and our community's requests for statements about the brutal murders of six Asian women and two others, members of an Asians and Pacific Islanders of Central Oregon affinity group have this to share:

None of us feel comfortable being interviewed to be the face and voice for our local Asian American community. Our stories, cultures, and backgrounds are diverse and distinct. For some context, the Asia and Pacific Group of the United Nations is composed of 55 different countries. Our shared experiences of racism, xenophobia, exoticization, fetishism, perpetual foreigner stereotypes, among others, is what brings us together in solidarity with one another.

Many of us fear for our physical safety when making public statements. When local Asian community members spoke out in The Bulletin about former Commissioner Henderson's racist reference to COVID-19 as the "China Flu," he vehemently defended his racism in a public Deschutes County Commission meeting and called on community members to "look us up." Take a look at the unmoderated racist and brutal comment section on our local media's websites and social media. Why would any of us want to subject ourselves to that vitriol and become a further target of that hatred? Why would we want to become the next victim of someone "having a bad day"?

Our community has never felt safe in Central Oregon as we have experienced violence and hate long before the pandemic started. Our children have been bullied so badly we have had to remove them from school. With the onset of the pandemic, it only got worse. We have members of our group who have lost business, do not feel safe going to the grocery store alone, who have been chased, barked at, growled at, and yelled at to go home. Across the nation, our elders are being robbed, attacked, beaten, and killed. According to Stop AAPI Hate, there were 3,800 anti-Asian racist incidents in the last year, mostly against Asian American women. Our experiences have been erased, silenced, discounted, and ignored both nationally and locally. We are enraged, frustrated, scared, and exhausted.

Stop asking us why we think this happened in the midst of our grief and mourning. Stop asking us to justify and rationalize the violence against us. Stop painting us solely as victims. Where are your reporters asking white people how white supremacy enabled a white man to murder eight people and be humanized in the media more than the victims he killed?

Silence is violence. Stop Asian hate. Black lives matter. Black liberation is Asian liberation. None of us are free until we end white supremacy.

Recently I had placed an order online. The seller happened to live in the Bend area. The item was being sent via the USPS. It has taken five days & counting to deliver. Why, because the USPS sent the package to Portland, down to Eugene then back to Bend, now over to Redmond. That is over 425+  miles, not to mention the man hours used to deliver this package. Had the USPS simply sent it the 18.1 miles to Redmond I could have had my package the next day. The USPS lost money last year due to poor management. Now we know why.

The Burden of Alzheimer's Disease in Oregon - A New Report

The Alzheimer's Association 2021 Alzheimer's Disease Facts and Figures report illustrates that the burden of Alzheimer's in our country and state is continuing to grow. An estimated 6.2 million Americans age 65 and older have Alzheimer's dementia, including 69,000 in Oregon. For the fifth consecutive year the cost of caring for individuals with Alzheimer's is surpassing a quarter of a trillion dollars.

As the U.S. population ages, Alzheimer's is becoming a more common cause of death. Deaths due to Alzheimer's have increased an alarming 145 percent since 2000, while deaths for other major diseases remained flat or decreased.

Despite these enormous numbers, to me, Alzheimer's disease is personal. My dad is living with dementia and I have struggled to watch as everyday tasks have become more difficult for him. Despite his diagnosis, my dad has remained resilient and taught me to accept the things we cannot change. With that being said, we do have an opportunity to shape the future of Alzheimer's disease.

In recent years, Congress has made funding Alzheimer's research a priority and it must continue. I respectfully urge Representative Bentz to support an increase in Alzheimer's and dementia research funding at the National Institutes of Health.

Visit alz.org or call the 24/7 Helpline at 800.272.3900 for more information about Alzheimer's disease, the latest in research and free resources available to the community.

The Japanese American Society of Central Oregon (JASCO) is a local community group that honors and celebrates Japanese heritage through arts and culture, food, education, events and sharing of traditions.

Despite JASCO's informal nature—and in consideration of recent anti-Asian sentiment and racially targeted, national violence against Asians, JASCO cannot remain silent as these perpetuated acts tear at the moral fabric of our country, impacting all peoples negatively irregardless of race.

JASCO strongly denounces any form of racism, discrimination, intimidation, and hatred occurring within our society. We honor diversity and inclusivity within our community and beyond. JASCO aligns with JACL, Embrace Bend, DEI Bend, C.O. Diversity Project, BLM and others that work to eradicate systemic racism and discrimination in our nation.

If you are encountering any form of racism, report to local authorities. To learn more, Portland's JACL site or NCAPA or https://www.ncapaonline.org/

Thanks to both the JASCO group and to the Asian and Pacific Islanders affinity group of Central Oregon for sharing your thoughts with readers this week. One gift card to Palate is hardly recompense for the initiative you've taken here, but if either group wants a gift card, come on in!