GUEST OPINION: To our elected officials and government leaders

Scratching the surface of police activity, policies and responses to local protests reveals that under the tranquil veneer of picturesque Central Oregon, a complicated, and sometimes dark underbelly remains. This week's editorial is a distillation of a number of personal accounts, public reports and future plans that involve local law enforcement. Bottom line: Society has been absolutely correct in placing more scrutiny on this sector of the people's government, and our job is to report back the facts as we find them. 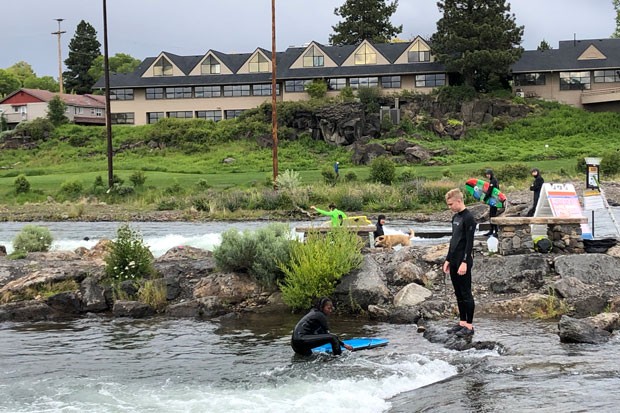 So many readers have come forward in recent weeks, offering us tips, demanding we do more around certain issues, and once in a while, even telling us they appreciate our coverage. Hearing from you, readers, helps us point our compass—all while we continue to adhere to journalistic principles of telling the truth, or the closest approximation of the truth that we can achieve. We aim to tell the truth, no matter what the truth reveals. Thank you for taking the time to read the product of that commitment.

GUEST OPINION: To our elected officials and government leaders,

Over the past week, armed militia have been patrolling the streets of downtown Bend to "protect" property from people they deem as destructive, such as looters, out-of-towners, ANTIFA, and the like. There is no evidence to verify the presence of vandalism or looting. This is a form of tactical misinformation used by white supremacist groups and their political counterparts, which represents a trend happening in various parts of the nation. These actions often incite and result in violence. Specifically, these armed men have been seen consistently downtown, outside places like Sidelines Sports Bar & Grill, Pizza Mondo, and a downtown furniture store. Intimidation of this kind is also present at local protests— armed white men standing guard, others tactically blowing toxic fumes onto peaceful protestors while insinuating an intent to run them over with their vehicles, and still others aggressively confronting community members hoping to incite violence. We need our public officials and leaders to take action.

We demand that elected city officials make public condemnations of false reports of looting, vandalism, and other insinuations of violence.

We demand that elected city officials make public statements that armed militias will not be tolerated in Bend.

We demand the police make a public statement denouncing these actions, stating clearly that the police are not aligned with armed vigilantes.

The goal of these "Antifa Fantasies," as they are called, is to mobilize right-wing activists to justify violence against people of color and community members at anti-racist events. They place themselves in a win-win situation by "keeping out the riff-raff" if no one appears, and shooting someone if their actions prompt angry, physical altercations. They claim to be working for public safety, but for who? Public safety refers to white safety and our concern here today is the safety of Black and Brown people in Bend.

Where does the misinformation that incites the presence of armed militants come from? Fear-mongering and misinformation has largely been spread through online outlets, social media, and word-of-mouth. It is important to note that the Deschutes Republicans have also played an active role in spreading misinformation. Please see the photographic evidence at the following link twitter.com/DeschutesDems/status/1268241345350520832

Coded language reveals the messaging behind such statements:

"... protestors have arrived from out-of-town" refers to ANTIFA, to looters, and to an ambiguous but dangerous threat to Bend, leaving room for interpretation and shifting narratives.

"Please stay alert" registers as a call to action, and one that reinforces a perceived need for weapons and armed force in a situation that does not require it.

The mention of the police and sheriffs tries to shift culpability.

Bend needs reform and change towards anti-racism, but such change is made through dialogue and policy-related action. Recognizing and publicly denouncing statements like this is vital to protecting Bend, protecting protesters, and especially protecting our Black and Brown neighbors. As we start to reopen our city, these armed militias are doing their best to ensure that people of color do NOT feel welcome in their own town. People of color will not feel comfortable eating at a restaurant or visiting a bar downtown when they know there are men with guns standing outside waiting for something to happen. White Supremacy is alive and well in this country and in Central Oregon. Scare tactics, like those employed by the said armed militias are a means of silencing protestors and Black and Brown leaders. Directly addressing such scare tactics for what they are diminishes their power. We will not be silenced.

— The Board members of Embrace Bend
Embracebend.com

The violent oppression and institutionalized racial injustice that takes place within our police forces needs to be addressed promptly and effectively. The American people are suffering and afraid. We have exhausted all options and desperately need those within positions of power to stand with us. Regulations, policies, and laws need to be implemented in order to combat the very prevalent issue of police brutality. Enforcing thorough investigations regarding violent police encounters so that officers who have indisputably murdered innocent people would be indicted, could be a place to start. The proposed "Hands Up Act" would effectuate investigation of officers involved in the shooting of those proven to have been unarmed and non-threatening. It would require police officers' body and dashboard cameras to be on at all times by prohibiting said offices to have access to the camera's functions, preventing potential tampering of evidence. They should not be able to turn them on and off. It would allocate more of the police budget to fund subsidiary action groups whose constituents would be trained in specific professions focused on reparation and rehabilitation. It would appoint a mental health specialist that could offer the necessary support and assistance, with the necessary training to do so, to an individual experiencing a psychotic episode. A trauma social worker could aid a victim of domestic violence, and provide them with the necessary care and support they need. Assess community needs and invest in community-based resources. That is the job of our elected officials, and they need to do it.

Here it is the anniversary of D Day, June 6, 1944, and I wonder, have Americans forgotten so soon why what Tom Brokaw calls "Our Greatest Generation" fought and won World War 2.

It took a long time for them to wake up, but when they did, Our Greatest Generation mobilized the Nation, stopped building cars or anything else and built warplanes, tanks, liberty ships, landing craft, everything to wage war in the Great Fight against Fascism. America's Greatest Generation were Anti-Fascists!

Are President Trump and AG Wm. Barr really going to label our Anti-Fascist "Greatest Generation" as a "Far Left Terrorist" group? Please, no! My father and my uncles fought in WW2 to defeat Fascism, and my grandparents, my mom and her sisters supported them in their fight. They are my heroes and I thank and stand with them.

There was a time in our USA when "Our Greatest Generation" was considered the center, the good and decent people who fought and defeated Fascism in WWII, and now I am so saddened that the Trump administration slanders them as a "Far Left Terrorist Group." "Our Greatest Generation" were the ultimate Anti-Fascists, they saved the World in World War Two, they earned that honorable label "Greatest" the hard way.

Imagine how horrible our world would be without our WWII "Greatest Generation" of Anti-Fascists, imagine if The Hitler and Mussolini Corporative State had won WWII and we were now ruled by the wealthy and their Corporations. Just one of the proud sons and daughters of Our Greatest Generation;

Tom: While I would have to argue that the wealthy and corporations do indeed have far too much influence in the government of the people these days, I had the very same thought about my own grandfathers, the original anti-fascists who fought in WWII. Come on in for your gift card to Palate!