GUEST OPINIONS: An Open Letter to the Black Community from the Asian Community & Proud to Fight for Bodily Autonomy

This week's calendar—long a popular portion of our newspaper—is starting to look more like its "old self," filled with events, meetups and happenings from around the region. While the calendar is not going to include any big events anytime soon, the fact that there are any at all gives us a sense of some type of normalcy—all while all of us continue to cope with the threat of COVID-19, the increased energy around anti-racism and policing policies and so much more. I believe I am not alone in feeling like I'm standing on a sketchy pool floatie, trying to navigate the choppy waters of the ocean. Things feel kinda normal and totally turbulent at the same time. What's my point? To embrace the chaos, I suppose—and for me, to try to reflect that in the pages of this paper. Happy reading! 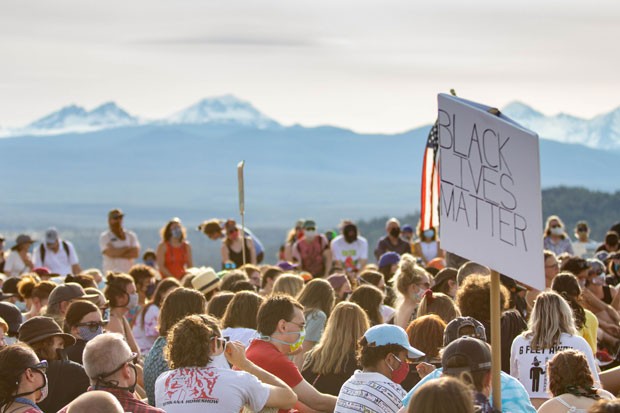 Guest Opinion: An Open Letter to the Black Community from the Asian Community

Since the founding of the Oregon Territory to the present, our state has systematically excluded and discriminated against Black people. Recent events have only highlighted the racism and structural inequities in our state and nation. We stand in solidarity with our Black community.

We know we have had a complicated relationship over the years, from the Afro-Asian solidarity in the 1960s and 1970s; to the injustice of Soon Ja Du receiving no jail time for killing Latasha Harlins, a 15-year-old Black girl in 1992; to the recent outrage of Officer Tao Thao turning a blind eye to the murder of George Floyd last month. There are deep wounds that we need to openly acknowledge, address, and begin healing between Asian and Black peoples. We must also address the ongoing harm that we cause by perpetuating anti-blackness within our own communities. For too long we have stayed silent and protected ourselves by aligning with whiteness and have a lot of work to do to challenge the internalized messaging that we have embraced as the so-called model minority.

We recognize and acknowledge with profound gratitude all the work your community has done for ours. Asian people in America would not have the privileges we have without the sacrifice and perseverance of the Black and Latinx communities. The civil rights movement opened the doors to immigrants of all color in 1965 with the Immigration and Nationality Act, paving the way for a more diverse and prosperous America, one that included people like us, but has largely excluded the Black community.

In the aftermath of the Vietnam War and our country's withdrawal from Southeast Asia, Black people fought for Southeast Asian refugees' human rights and held our country accountable. Malcolm X helped inspire Asian activists to reclaim a sense of the history of Asians in America and to reject wholesale assimilation in the 1960s and today. Black civil rights activists advocated for justice for the hate crime and murder of Vincent Chin in the 1980s. And recently, some of the loudest voices against anti-Asian racism during the pandemic have come from our Black community.

Now is the time to fight for Black lives. We commit to adding our voices, votes, dollars, and bodies to the fight; and will use our privilege to stand with you.

At Planned Parenthood Columbia Willamette, we know that the fights for LGBTQ+ rights, reproductive rights and racial justice are linked. We believe that all people deserve basic human rights — including access to health care—and to live free from violence and discrimination.

The LGBTQ+ community, with its storied history of resistance, knows all too well the kind of brutality we're witnessing across the country right now. The Stonewall Riots, which sparked the modern LGBTQ+ movement in 1969 and the first Pride march 50 years ago this month, were led in part by transgender women of color in protest of state-sanctioned violence by police toward LGBTQ+ people.

At the time of Stonewall, institutionalized discrimination against LGBTQ+ people was the norm. Despite the strides made toward equality since then, LGBTQ+ people are still denied access to basic needs such as housing, health care and employment — and the ability to raise their families and live their most authentic lives. This is even more acute for Black LGBTQ+ people who continue to face oppression and violence at the intersections of systemic racism, homophobia and transphobia.

Full bodily autonomy is the ability to make personal decisions about one's body with dignity and without judgment—as well as the freedom to live without the policing of your livelihood. If Black people do not have the right to bodily autonomy to live their daily lives—or protest the deep racism of American culture—without fear of violence or murder, we can never achieve justice, let alone reproductive freedom.

We also must dismantle the structural inequities that deter LGBTQ+ people from seeking and receiving timely proper care. LGBTQ+ people of color in particular experience higher rates of chronic health conditions such as diabetes, asthma and HIV—and are more likely to be uninsured and unable to afford care.

PPCW's Bend Health Center is proud to provide health care that's inclusive and respectful of all genders. We are an essential and irreplaceable provider of hormone therapy and sexual and reproductive health care to LGBTQ+ people, especially in areas outside of major cities where we are often the only provider doing this work. To help ease barriers to access during the COVID-19 pandemic, patients can now access care by phone, video or in person. Our goal is to make every person who comes to us feel welcome, safe and cared for while providing the best possible care—no matter what.

This Pride Month, we are with you in solidarity, protest and pride. And we redouble our commitment to building a world in which everyone can access basic human rights—including health care—and live free from violence and discrimination.

It is very interesting that our own DA stated that a Redmond officer's act of sexual misconduct was a predatory act of power over a sick, dependent individual and there are NO sex charges filed.  People have served prison sentences for less than what this office did, and he isn't even threatened with charges or with the devastating sex offender listing that any conviction carries.  He's charged only with "police misconduct."  Something stinks.

Bonnie: Thanks for your letter. You earned Letter of the Week! Come on in for your gift card to Palate.