Minnesota is my place of birth. Minneapolis is where I studied journalism and had my first reporter job, and where I met friends from nearly every continent. Lake Street is where I rode my bike to get to work, to eat food from its many immigrant-owned businesses and to drink a cheap cocktail. None of these ties mean I am more or less connected to the atrocious death of George Floyd, which happened in that city I love—but it does mean I have a real sense of what it looks and feels like there right now. It means I can text friends to get updates on their safety as they attend protests, or simply try to defend their neighborhoods from outside groups who they say are posing as protesters to sow mayhem. It means maybe I have a more inside view; but when it comes to channeling knowledge into action, that work is done here. 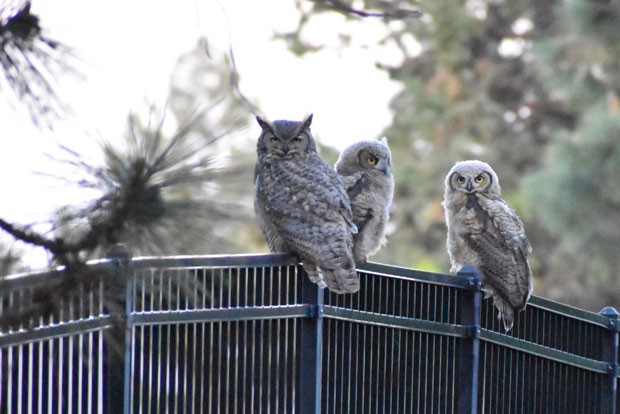 In addition to our Outside Guide stories (and sometimes concurrently), inside these pages we have gathered the reactions and actions of some of the people of color who live and work right here. Our histories and back stories have us Central Oregonians hailing from everywhere, but as we outlined in this week's Opinion, it's where we live that we should put our energy and focus into what to do next. I look forward to sharing more of your stories of how you're doing that, Central Oregonians, as the weeks and months go on. As always, your comments, letters and story suggestions are welcome at editor@bendsource.com.

BLACK PERSON! BLACK PEOPLE! BLACK! BLACCCKKKKKK! Oh did I scare you? What, are you afraid now? BLACK! Does this topic make you uneasy, fearful, ashamed? Now that I have your attention—Let's Talk Optics.

Ahmaud Arbery, George Floyd, and others would be with us today if one simple thing happens: Don't send an armed officer to handle a basic disruption that two humans should be able to handle. It's easy as ABC!

We've lost too many black Americans for trying to survive something that should not require survival. I'm sick of stories that pop up where A) the subject is usually a white woman or man and B) the target is a black person doing some activity like sitting in a Starbucks, selling water, napping in the park, or providing food for the homeless.

We live in a system where white people can call the police for deadly force to ensure their comfort. We all know that the police use excessive force more for black people than they do whites. Because when the police come for a disruption involving a person of color you know it's different. So when will the weaponized discomfort stop? And shit isn't new, from 1877-1950, the United States had 4,400 reported lynchings (Source: National Memorial for Peace and Justice). I'm not saying it was a lynching, but cutting off someone's air supply with a knee in your neck is sure damn close. We need to look at the structure of the system, where the power lies within that system for any changes to happen. We can change the narrative by changing the action and building a new system.

I know these questions are rhetorical being that we reside in Bend, but I tell my children every day to be proud of their African American heritage. I love looking in their eyes, full of hope, and wonder, knowing they have the opportunity to achieve insurmountable things. I was watching, "A Time to Kill" the other day, and I remember Samuel L's character tell his attorney, "make them believe that I'm white." But I say, why do I have to continually make you feel comfortable because of my blackness? I'm sick and tired of being sick and tired of the racial inequalities i have to deal with every day. Not knowing if the COVID-19 mask I'm wearing constitutes an ass whipping or being killed.

Finally, if you are witnessing injustice, put the camera down. If you know that there is injustice happening, step out of your bubble and help a fellow human being; it just might save their life.

GUEST OPINION: No Hero
In response to "Called to Act," the Source's cover story on 5/21

Thank you Source Weekly for this story, and for calling attention to this campaign. However, I do not accept recognition of any kind of "hero" (The Bulletin) while communities of color continue to face disparities and oppressions due to the systems built against them.

A hero is also defined as 'one who shows great courage' - and I ask you all to understand, when my friends and brown relatives in Central Oregon are being discriminated against, exploited, pushed aside and oftentimes forgotten, what choice do I have but to speak up and help tear down barriers the systems hold against us? Equal rights does not equate to equal treatment. We show great courage because we are forced to. Forced to self advocate, forced to build our own communities up, and in no way is that mythological or superhuman. It is as real and as human as it gets. It is not heroic to me to have common decency and humanity or compassion, it is simply the right thing to do, the way my parents raised me.

I am the daughter of once "immigrant" parents - my father of Indigenous Mexican descent once considered 'illegal' on stolen land. I am a single parent of two mixed race children, and in no way are we white-passing. Living through daily microaggressions, passive racist remarks, blatant racist remarks, listening to my 13-year -old retelling a story of being called the N- word on the playground of Cascade Middle School earlier this year. In a constant state of fear due to the color of our skin.

My gratitude is insurmountable, however, but more so for my own community that has put their trust in me. That has exposed their vulnerabilities and shared their most personal struggles with me and our volunteers. The undocumented people that built this economy right here for us to thrive in and never once seeking praise for simply doing their jobs. The folks that work for menial wages, that expose their health and safety in order to feed their families and simultaneously put food on our tables. No, we're not all field workers. Some of us hold the privilege of speaking the dominant culture's language, have diplomas and higher education degrees to hold jobs in sectors we traditionally do not because of the inequities that exist there as well, and we find ways to advocate for our communities because we've lived these realities our entire lives. But from the janitors at our schools, to the rural agricultural farm workers, to the directors of Latinx programs at our colleges, Central Oregon, we are essential to this community beyond COVID-19.

Lastly, to the allies that donated, shared our posts, and emails and jumped into action when called upon; Thank You. Thank you for stepping up. Thank you for showing up.

I appreciate the Source reporting on the Black Lives Matter rally Saturday. The lesser-attended rally took place in Prineville on Sunday. Unlike BPD, no statement from Prineville Police Department was issued to affirm safety from the white nationalism performance art on display there.

The opposite side of the street was lined with anti-protestors. Their behavior was threatening. Some hecklers were visibly armed or carried partially concealed weapons while trucks spewed smoke (rollin' coal) and motorcycles revved engines (both violate environmental laws and noise ordinances) in vulgar displays of distaste and disapproval. Peaceful protests are unwanted enough to warrant staging a standoff. While disappointing, this should shock no one.

"Get out of MY [expletive] town" was shouted repeatedly. Colonized states who forced indigenous peoples to sign treaties under threat of genocide didn't earn current residents ownership here.

Citizens need take actionable steps toward an equitable and equality-centered Central Oregon, as we cannot rely on police and policy for protection. This is white peoples' labor to do, vulnerable populations cannot carry the burden alone. Continuing to demand policy overhaul is critical.

"All Lives Matter" is a sentiment that dismisses and minimizes what is happening to Black people right now, and has been happening for 400 years. American political activist Angela Davis said, "In a racist society, it is not enough to be non-racist—we must be anti-racist." It's time for Central Oregon to pony up against racism until equality is measurable and police and policy makers accountable. We need Source Weekly to be here every step of the way.

Thanks for your reminder, Pixie. You get the letter of the week! Come on down for your gift card to Palate.