This week's issue brings together many local voices with diverse perspectives on the Deschutes River. We hear from farmers, environmentalists, heads of the local irrigation districts and two different women's fly fishing organizations. We also learn about a new trend in farming and water conservation: going vertical! 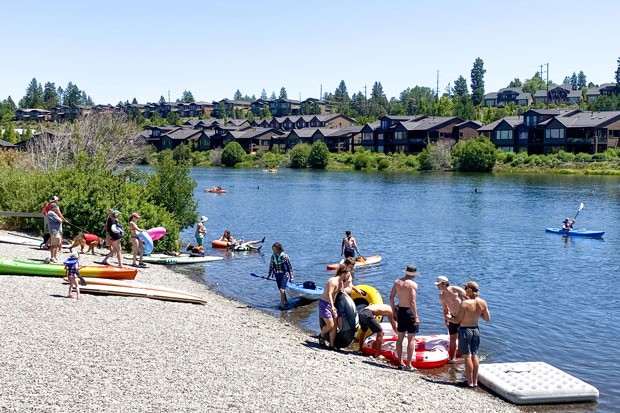 One thing we heard over and over was that everyone who values the river wants the same thing. While this may sound good in theory, in reality, these groups have spent years working out their differences. They continue to collaborate and compromise to come up with the best solutions to keep water in the river, crops in the ground and tourists in tubes.

But it hasn't always been easy. Deep controversies over water in the West go back to the 1800s. More recently, a lawsuit aimed at protecting the Oregon spotted frog made national headlines and exemplified the tensions between those who want to keep water in the river at all costs, and others who have come to depend on irrigation for their livelihood.

While all these issues are still up for debate, most can agree, in the words of Jefferson County farmer Phil Fine, "None of us would be here without the river."

Guest Opinion: Canal Piping Costs Too Much Compared to Alternatives

Most of the irrigation districts in Central Oregon have recently completed system improvement plans and now advocate for large scale canal piping. Central Oregon Irrigation District (COID) is currently a major focus of this large canal piping agenda. Everyone agrees that conservation measures in COID are critical, but not at colossal taxpayer expense. COID has over 400 miles of canals and estimates to pipe these canals and those of the other districts around Bend are around $1 billion. The project COID is currently proposing pipes only eight miles of its canals at a taxpayer cost of $42 million. You do the math. We do not have the time nor money to fix the problem predominantly this way. It is time to look seriously at the reality of our current land use and water use and to devise approaches that are appropriate, affordable and can be expedited.

Land use within COID has changed dramatically over the past 40 years. Today, around half of COID's 3,800 patrons irrigate three acres or less. Does it really make sense to spend hundreds of millions of public dollars to pipe canals and pressurize water for small lifestyle farms? No, it doesn't. We have a water distribution problem – too much water available to properties that engage little in farming and not enough water to our large agricultural producers and to the Deschutes River. The best way to solve this distribution problem voluntarily is through water marketing.

So, what is water marketing? In simple terms, it is providing financial incentives to landowners to use less water. The water savings can then be used to restore stream flows or can firm up a farmer's supply. These market tools could entail leasing a landowner's water for a season or purchasing it permanently. They could mean providing money to incentivize the upgrade of an irrigation system or to simply use less water in a particular season. The proponents of large canal piping continue to stress that irrigation districts cannot force water users to change the way they use water. Water marketing is not compulsory; however, it is completely voluntary. It is a tried and true method backed by 30 years of studies and practice.

The Deschutes Basin Study, completed last year with funding from the U.S. Bureau of Reclamation and Oregon Water Resources Department, indicated that "the total opportunity for market-based incentives is estimated to be up to 160,000 acre-feet annually at an estimated average potential cost on the order of $400 per acre-foot." These financial incentives have the potential to achieve redistribution of the region's water at less than one-tenth the cost of large canal piping.

It doesn't make economic sense to spend $1 billion to pipe the water to these lifestyle farms, but financial incentives can alter their water use. In so doing, they will help redistribute water in our basin voluntarily and cost-effectively to the benefit of the Deschutes River and efficient agricultural producers.

Our rivers function not only hydrologically but also in a cultural context. They have been dramatically altered since the first white people ventured here. With their arrival, forests were logged. Early newcomers tried to eradicate beavers. They introduced nonnative fish and other species. Rivers were dammed and water diverted. The people who already called this place home were displaced, often brutally. The colonization of people, and the monetization of land and water, go hand in hand. We must dismantle both if future generations are to inherit a just society and livable planet.

I am Carina. I belong to this land and its rivers. My ancestors lived along the Columbia River and its tributaries, practicing subsistence fishing and hunting. My grandparents ranched on today's Warm Springs Reservation. My family instilled in me the importance of using traditional knowledge to benefit all, and to think of the next seven generations. We have an obligation to the children of the future to leave enough resources for them, and to commit to continuously addressing the systemic inequity woven into our society.

We must not wait to act. Low snowpack, fire, irrigation runoff, and water shortage issues have impacted the people of Warm Springs for years. At a time when we are being admonished to wash our hands to prevent contracting Covid-19, imagine not even having drinking water available in your home. It is disheartening that in 2020, we still have Indigenous people living without clean water on their own homelands.

We owe it to our ancestors to be the best versions of ourselves we can be. That means collaborating with one and all, regardless of personal beliefs, history, or friction. It means acknowledging the deeply racist policies of our state and nation, and recognizing that clean water is only the surface of a long history of genocidal policies. We must commit to long term unpacking and know that these issues will be continuous, open ended, and difficult.

I am Gail. Like all white people, I am a newcomer to this land. We in the dominant society have the luxury of erasing the history of others. The backstories of much of what we love are rooted in injustice. John Muir, for example, was complicit in the removal of Native Americans from today's Yosemite National Park.

We are all linked to history. It defines and pervades every aspect of our present. We are called upon today to examine our role in the inequities that are interwoven into our lives. How do we, who have taken so much, and taken it for granted, engage in the hard work of addressing the systemic inequities we've all inherited? Do our actions inadvertently reinforce the status quo?

Can we hear when we are told that water is sacred? Are we able to adopt an ethic of reciprocity, one in which we share the water with all peoples and all beings? Can we change our thinking and adjust our actions so that all can live?

—Carina Miller
An enrolled member of the Confederated Tribes of Warm Springs and previously served on the Tribal Council.

—Gail Snyder
Founder/executive director of Coalition for the Deschutes.

Congress should protect our elections and fund vote-by-mail

COVID-19 is wreaking havoc on our families, our economy, and our elections. But Congress has the power to intervene right now.

In response to safety concerns and pressure from constituents like me, Congress has already passed limited funds to expand absentee voting, online registration, and in-person early voting, but it's simply not enough.

Without $4 billion in total funding for election assistance, voters may not be able to make their voices heard during one of the most important elections of our lifetime. We need our leaders to prevent a situation where any voter is forced to choose between protecting their health and casting their ballot.

While these policies are critical as we recover from this national crisis, voting reforms like expanding no-excuse absentee voting and online voter registration are common-sense changes that will help voters participate in the political process. Multiple states have already adopted vote-by-mail, and their models could be implemented across the country.

I expect Congress to provide more economic relief, but the next bill also needs to include expanded funding for mail-in voting, more early voting at safe polling places, and other options to make voting as safe as possible this November.

If voting by mail is good enough for Donald Trump, it should be good enough for all of us. Congress needs to make it possible for every eligible American to vote by mail if they choose to do so.

Thanks for your letter, Janet. Come on in for your gift card to Palate!