"Some Want You to Believe Protesters are Outsiders. Don't Believe Them."

This week in the life of a weekly newspaper editor: Co-hosting our latest Love Your Neighbor forum, with a panel of Black Central Oregonians. (Catch a follow-up video interview with some of the panelists on our website this week.) And in preparation for the Redmond issue: Strolling the streets of the Hub City to get a sense of where things stand in Central Oregon's second-largest town. The verdict: While some businesses have closed, other new ones continue to open up. What's more, the economic picture there is perhaps not quite as concerning as Bend's. See more on Redmond's economy in this week's News section, an update on the new food spots opening in Redmond in our Chow section, and so much more on Redmond in this fine issue you hold in your hands. 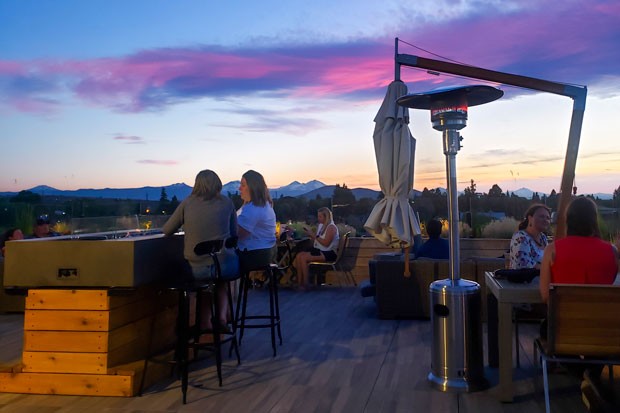 RE: "Some Want You to Believe Protesters are Outsiders. Don't Believe Them." Opinion, 6/18

Thank you for your editorial Some Want You To Believe Protesters Are "Outsiders." Don't Believe Them. I'm often dismayed by the 'exclusionary' identity that Oregonians seem to hold, that seems to even be capitalized on in our town (bumper stickers that read, "Bend sucks, don't move here", etc.). Though I recognize that this identity is not unique to Oregon or our area, we can't deny that this facet of the Oregonian identity is steeped in actual racist black exclusion laws. These laws not only denied people of color access to the state, they seem to have permeated and stood the test of time as a defining identity of the state (and even more exclusive, identities between towns in the state). I appreciate you calling out the need for our community to deny these claims, as not only are they untrue, they are dangerously alienating. The hypocrisy of the predominantly white populace of Oregon is that the very people that created exclusion laws and perpetuate this identity today, are those that were and are living on stolen Indigenous land. Acknowledging and reconciling history is imperative to moving toward a just community. If we ever want to believe that we are a kind community, we have to kick this exclusionary identity.

It is very interesting that our own DA stated that a Redmond officer's act of sexual misconduct was a predatory act of power over a sick, dependent individual and there are NO sex charges filed.  People have served prison sentences for less than what this officer did, and he isn't even threatened with charges or with the devastating sex offender listing that any conviction carries.  He's charged only with "police misconduct." Something stinks.

I have been very disturbed ever since George Floyd was murdered.  I am so sick of Donald Trump and his Rush Limbaugh-loving core of paranoid, gun-toting, Confederate flag-waving, Make America White Again disciples.  Thankfully, most political Independents like myself and many lifelong Republicans will vote for Joe Biden because of, among other things, Trump's bizarre church photo op. A U. S. President should not shoot and gas peaceful protestors for any reason, but especially not for something as frivolous and goofy as a photo op. Trump has repeatedly misunderstood that governments and Reality TV shows are two different things, which would not be a problem if he were running a TV show.

But I am most disturbed when I contemplate what dictator-wanna-be Trump might do when he realizes that he is going to lose the election. I doubt that he has ever lost a confrontation as an adult, and since Winning (with a capital W) confrontations is his main raison d'etre, what will happen when it appears as if he is going to Lose (with a capital L) one of the two biggest confrontations of his life?  Will he try to end our democratic form of government?  Or will he, as Commander-In-Chief of the equivalent of more than 100,000 Hiroshima atomic bombs, threaten to blow up the world because if he cannot be President, no one can?  I cannot envision him graciously accepting the loss and expressing his support for the new President as all past Presidential Election losers have done.  I'm pretty sure that he is not psychologically built like that because his most contemptuous epithet which he often tags people with is "loser."

Trump's former National Security Advisor and solidly Republican hawk John Bolton was asked, "if Trump loses the election, do you think that he will leave?" John answered that the Republican Party would force him out as it had done Nixon. He was then asked, "do you think it would do that?"  John answered, "I hope so." That conversation would have been unimaginable from 1776 until four years ago, and it illuminates the real—not fake—possibility that Donald Trump could end or try to end our 244-year-old democratic form of government. Trump's former Secretary of Defense General James Mattis has named him a threat to the U. S. Constitution!

The next few months are going to be intense.  America has caught an obsessively egomaniacal tiger by its tail, so now what will it do with him?  And more importantly, what will he do with America?

An Open Letter to the Oregon Health Authority

What are the numbers for total Covid 19 tests performed? I thought the original reopening criteria was to be based on a percentage of positive/total tests performed? Your data has repeatedly indicated that information is not available.

Does a person need to have any symptoms in order to obtain a test? The Deschutes County website indicates testing has been expanded to include "mild" symptoms. It doesn't say anyone - regardless of symptoms or not- can request a test.

If this is the case then it would be convenient of your agency to not report the total number of tests performed, as a small number would significantly increase the percentage of positives.

When I talk to people locally I hear, "there's no virus around here" or "we don't have many cases here". You are doing an injustice to the residents of Deschutes County by deluding them into thinking they are safe and not at risk of either transmitting or contracting the virus.

Coming from Nevada where in most instances anyone can get tested - and it is encouraged - our numbers there might be distasteful but they are realistic.

Thank you in advance for your response.

Pack It Out and Play It Forward

I've always appreciated Bend's access to outdoor activities and environments, a sentiment shared by many, especially as we deal with the multitude of COVID restrictions and impacts. In particular, I'm seeing an increase in folks "dry or dispersed" camping on BLM and National Forest lands, where services such as restrooms and garbage pick-up are not provided. Unfortunately, I'm also seeing an increase in general trash, tissue potty "flowers," and dog poop bags in these areas. Perhaps people still think that someone will be coming out to clean up these rogue sites. Such is not the case.

While outdoor experiences can serve to refresh, none are refreshed by the trash of those campers who choose to ignore the edict to PACK IT OUT. Whether you are just visiting or have made your home outdoors, please be a good neighbor and clean up after yourself.

As a self-proclaimed Earth Steward, I've taken to slipping a garbage bag and some latex gloves into my daypack so I can pick up trash where I find it. This I can do; it is my way of paying it forward where I play- leaving the trails and forests better for us all. Turns out, I'm the "someone" I've been waiting for...and so are you.

Pack it Out and Play it Forward, Self-Proclaimed Earth Steward,

Gina: We are the ones we have been waiting for, indeed. Come on in for your gift card to Palate!