In other years, we've put out our annual Restaurant Guide earlier in the season, giving locals and tourists alike a guide to what's good to eat in Central Oregon. This year, everything is different. Restaurants and bars continue to grapple with new and changing regulations, with customers who might not be ready to comply, and with a global supply chain disruption that means rice may be on the menu one day, but off the next. 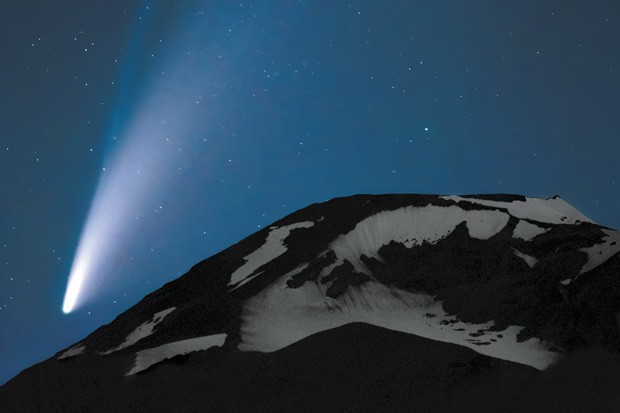 Food carts, on the other hand, are among the food establishments able to operate in a more "normal" way, so with that, we've selected two standouts to win a "tie" Rookie Food Cart of the Year. In a weird, uncertain world, this is our way of giving a hand up to the food service industry in Central Oregon.

So pull the Restaurant Guide out, save it for a time you're craving something new, and enjoy our local establishments in the way that feels safest to you!

My name is Josh Maquet and I run the Astro Lounge along with Tiffany Kreitzberg, and I'm writing in response to the recent allegations from the OLCC.

The employees of the Astro care about their jobs and this community. We have meetings almost daily on how to deal with conflict resolution, how to politely but forcefully tell people to put their masks on. Three of my employees didn't get unemployment when we shut down the first time. They suffered. I have talked with them about closing back down and they are adamant about being open. They need the job. My sales are way down.

The first week the complaint from the OLCC was that we had two girls dancing with no cocktails and no masks and an employee behind the bar had his mask down around his chin. Customers were having trouble hearing him because of the 6 foot distancing rule. Constant battle at all times.

The second weekend the OLCC was never seen at the front door or in the building and they never contacted us. We found out someone from OLCC walked by and looked in the bar from the doorway and wrote up the second report based on that.

Tiffany and I have had meetings with Emily [Freeland, Deschutes County Health Service's Environmental Health Specialist] and an agent from the OLCC and both of them told us we were doing everything we could. We have masks at the door, we have signs, we have tape on the floor, we have separated tables, we have closed the back door on the weekends so we can just count people thru the front door, we have two people working the front and back door, we scream at people, we tell them to put their masks on constantly. Most of the people we are in contention with are from out of state. We have lost all our regulars. They won't come in anymore on the weekends due to all the nasty tourists.

Bill Moseley [Bend City Councilor] actually came in on Friday without a mask and screamed at Tiffany saying he was having us shut down at 10pm with the police. He was told to put a mask on or we were calling the police. After three minutes he put his mask on. I have all of this on camera. I contacted him immediately and asked him to come down at 10pm and work the front door and be the mask police. He declined.

I want more OLCC agents and OHSA agents so they can come down and manage all the people. Why are the foodservice employees made to do their work? It's hard enough for them to live in this community with the lack of sales we have and then they have to be the mask and social distancing police as well?

The OLCC is doing what they have always done. They target the busy places to justify their jobs but do nothing to help us. The OLCC is acting like the mafia and they are targeting downtown's bars while other places around Bend are much more crowded.

All in all these are trying times. Myself and the staff are all severely stressed but we don't know what else to do. We need help not accusations.

Whiteness, COVID-19 and Our Kids

The day after Bend announced a surge of Covid-19 cases in young people, I came upon a dozen white teenagers congregating on the narrow bridge connecting Columbia Park to Riverfront Street. My 4-mile run came to a halt. The crowd slowly made a clearing for me to squeeze through. I asked where they were from. One of them said politely, "We are from Bend." Another young man blurted out, "I'm from my daddy's balls! Where are you from?" I called him over and asked him why no one was wearing a mask. He said, "We don't have to. We're kids." I ain't mad at him. In my former life, I was a teacher at a large public high school. One thing I know is that adolescents mimic the adults in their lives. My ire is aimed at the parents, pastors and politicians in Bend who perpetuate the white entitlement on full display during this global pandemic. White folks reading this eager to give the young man (and his friends) a pass would quickly drop their "boys will be boys" justifications if the boy (or the entire crowd!) was Black. Just imagine. In a city that is 92% white, incidents like this summon us to start having humble and accountable conversations about the ways that a racist society makes white people (like me!) more oblivious, defensive and entitled than ever before. The coronavirus might be "novel," but the white supremacy isn't. Let's take both outbreaks seriously. We've got nobody to blame but ourselves.

RE: Public School Leaders Are Doing Their Best. Demands for a Full Reopening Aren't Helping. Opinion 7/17

While I do not have the answers to reopening schools and what it should look like exactly, I do think that we need to have some town hall meetings and families should be a part of the decision making on this.

Secondly, I believe that Bend La Pine Schools should implement year round school with three weeks off each quarter to include holidays as well as incorporate a hybrid model.

This would provide a way for children not to miss school or important events as we did the last three months of this school year due to this pandemic. Unfortunately, this is not going away anytime soon and who knows what the next pandemic could look like. We have to be safe first and foremost. In a year round model we would have that time to quarantine for three weeks if there were a need for that and it would provide a more balanced year. There would be opportunity for outdoor learning in the summer and this might be better for parents who scramble to find camps and activities for their children all summer.

The schools could invest in event style tents and tables so children could be outside in the fresh air socially distancing in summer. It would also provide a more stable and consistent year for the children. And statistically speaking it would be better academically for our children, as Oregon is a state that goes to school the least amount of days and time in relation to the rest of the nation and it is apparent in our academic scores and number of high school graduates and those who choose higher education.

I think that sending elementary students back full force will be an epic failure as elementary schools are Petri dishes. Young children are not as hygienically aware, especially the younger ones and this is not going to work in crowded classrooms. I am not sure what the thought process is there. I do think the surveys sent out were completed by some but I think this decision needs to be based not just from surveys but actually listening to parents and providing a forum to voice our concerns.

Bend House District 54 will be in play this November as Democrat Jason Kropf takes on Republican incumbent Cheri Helt. What's at stake for Bend in this election? Do we continue to allow political influence in Salem to allow mega-dairies to set up shop in Eastern Oregon and push family farmers off the land, pollute our air and water, drain our water supplies and harm animal welfare?

Salem continues to use Eastern Oregon as a dumping ground for industrial polluters such as mega-dairies. In 2017, despite widespread public opposition, the Oregon Department of Agriculture approved the Lost Valley Farm mega-dairy in Morrow County to disastrous ends. With 30,000 cows, Lost Valley Farm began violating its permit almost immediately after opening its doors. It put our public health at risk and threatened our air and water. Hundreds of thousands of Oregon taxpayer dollars later, state agencies finally shut down Lost Valley.

Now, the Oregon Department of Agriculture is considering permitting a new mega-dairy, Easterday Farms, to operate on the former Lost Valley Farm site. Easterday Farms would house nearly 30,000 cows in an area where people's drinking water is already contaminated by Big Ag pollution. We cannot allow Eastern Oregon to become the next hotbed for factory farm production. We need a mega-dairy moratorium now! Our communities need representation in Salem that will hold the Governor and her agencies accountable. Stop using Eastern Oregon as a dumping ground for mega-dairies!

David, thanks for bringing this issue to our readers' attention.