Not long ago, I got an email I didn't want to get. Longtime Natural World contributor Jim Anderson was writing to tell me he was crafting a farewell column, as he packs up his home and plans to move in with family to live out his days. Surely this can't be the last one, I thought—and if it is, I couldn't leave Anderson to simply write that piece without giving some others the chance to weigh in, too. 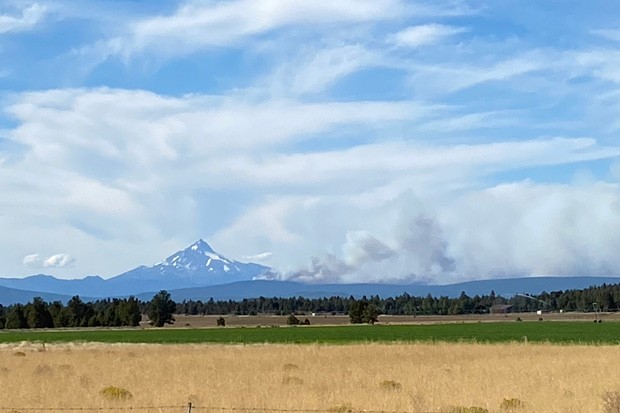 Anderson has touched so many lives in his many decades in Central Oregon, and in talking with some of those people this week, it became clear that I had only begun to scratch the surface of understanding just how much he means to so many people. Dedicating our cover and feature section to him—and to those who know him well—seems a small tribute to him, but it's the type of tribute a newspaper can offer... these shreds of pulp smashed together and joined with ink, serving as our homage to a great man. As I imagine he would say to me, "Good on ya, Dear Heart..." and don't go out among the stars too soon...

Vote By Mail continues to capture the attention of the nation in advance of this Presidential election year. Concerns over the United States Postal Service (USPS) operations was the latest spike in news this month.

Fortunately, Oregon has over two decades of experience working with our local partners at USPS and has an excellent working relationship with them to ensure ongoing support for our elections. We will, of course, continue to work with them and monitor any potential impact to both the mailing out of ballots to voters and the return of ballots. The USPS has told us that Oregon should have "sufficient time for voters to receive, complete, and return their ballots by the state's Election Day return deadline."

If any Oregon voter is concerned about the upcoming election in November, there are multiple steps they can take to ensure their ballot is received in time to be counted. Every ballot envelope has a unique barcode so voters can track their ballot on our My Vote website. We also encourage voters to take advantage of the hundreds of conveniently located dropsites throughout the state to drop off their ballot in person. We will continue to work with our partners like county clerks across the state to make sure all Oregonians know the best options to return their ballots, whether it's through the mail or in secure drop boxes to meet election deadlines.

—Bev Clarno, Oregon Secretary of State
Clarno issued this public statement this week. Her office gave the Source permission to reprint it here.

On a Wednesday night, as protesters poured milk into the eyes of a sobbing ten-year-old girl who had just been pepper-sprayed, I stood speechless and dismayed. How was it that two key members of Bend's community (for over 15 years) could be ripped away, without a federal judicial warrant and without transparency? Unfortunately, this has been happening all over the country under the Trump Administration. Yet ICE, the agency instrumental to Trump's "zero tolerance" approach, is a relatively new invention, formed under the Department of Homeland Security in 2003. Its closest predecessor, Immigration and Naturalization Services, wasn't focused on systematically detaining and deporting those already settled in this country. When we hear "abolish ICE," many Americans react as if this call is extreme. Yet when we witness the terror that ICE has fostered among our immigrant communities, we see that the agency's occult tactics and militaristic detention complex should have no place in our immigration system.

I spent 2016 and 2017 in Mexico interviewing migrants for my nonfiction book, No Option but North. In speaking with hundreds of Central Americans and Mexicans, one thing was astoundingly clear: the world of migration is one of harrowing violence and trauma. I spoke with Roberto, who fled gangs in El Salvador when his small business could no longer pay their extortion fees. I interviewed Abraham, who was kidnapped by a Mexican cartel while in transit, barely surviving their torture. I spoke with a mother (who now lives in Bend) who left her home in Guerrero, Mexico, after cartel members burned children at her daughters' school alive. When migrants knowingly prepare for the possibility of being kidnapped, raped and even killed on the journey north, yet they go anyway, there's a reason—there's greater suffering at home.

And yet when they make it to the supposed land of opportunity, they encounter another form of violence and terror: the constant, looming threat of ICE. Their children are now terrorized by the idea that their parents won't come home one day. On Wednesday, this nightmare became reality for two Bend families, as the children cried out to their parents through impenetrable bus walls.

As U.S. citizens, we can pretend that the violence inflicted on our immigrant communities—in all its forms—is somehow the natural consequence of law enforcement. Yet if we ask ourselves what we would do in their position, most of us would follow the same path. We would recognize that there is literally no authorized path for those who flee by necessity to immigrate. When we bear witness to the trauma our immigrant communities endure, we have a stake in changing the policies that create it. And the burden of calling for more just, sensible policies should not just fall on immigrants, or Latinx communities. It should fall on all of us.

—Kelsey Freeman is a writer based in Bend and author of the book, "No Option but North: The Migrant World and the Perilous Path Across the Border"

The Man Who Would be King

In 1776 over one third of American colonists decided they were more comfortable living under a king than fighting for the establishment of a democratic republic. It now appears some 35% of those polled would prefer to be ruled by an autocrat than under the democratic institutions and norms that were earned through a bloody Revolution.  Trump's notorious statements that, "I have total authority" and "the right to do whatever I want" demonstrate a total disregard or misunderstanding of Article II (The Executive) which clearly did not empower the president with such powers. Trump's actions to undermine the Constitutional authorities of State Governors were never so egregious as his tweets, "LIBERATE MINNESOTA!" and "LIBERATE MICHIGAN, and "LIBERATE VIRGINIA!  Interestingly, when it came time to step up and take the helm in a truly national catastrophe, he punted the ball and his responsibilities down to the governors. The result: we represent about 4% of the world's population and 25% of deaths (175K and counting) from COVID-19.  He has repeatedly disregarded Congress, never so much as when he diverted billions of Defense dollars to build his ineffectual wall and refused to allow officials to testify. His commuting of convicted felons, his measures destroy the institution of the US Postal Service in order to suppress the vote, and his continued violations of the Hatch Act through his illegal use of our government's resources and property are clear evidence that Donald J. Trump is a "man who would be king".

No one has a "right" to not wear a mask

Some complain wearing a mask interferes with their freedom. Here's a clarifying example that may help these people.

The US Postal Service is not a business. It is a necessary government SERVICE.

J.—Thanks for the reminder. Have a great week!