As journalists, we are among those rare breeds who choose to go into chaos and unrest when others are steering a clear path away. Such was the case this past week when I ventured to Portland to see the protests there for myself. People said I was brave for doing so. Others questioned whether a story in the Rose City is relevant to people in Central Oregon. I say to both that I was merely doing my job. 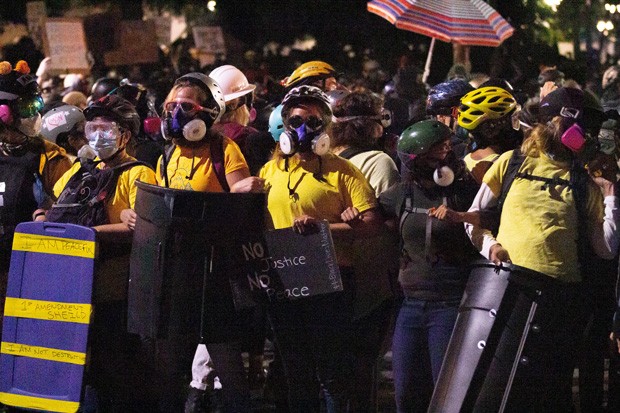 The protests in Portland—and the response by federal troops—is occupying national headlines even now. It is definitely relevant to local readers—as much as any story about the rights and responsibilities of Americans is relevant to any American, anytime. Many people have strong opinions one way or the other about the issue—as if it were a black-and-white thing; they either support the protesters, as many average Portland residents who I know do, or they get disgusted by the destruction of property. My job is to report the news as accurately as I can, wherever it lands. What I can assert, however, is that the core message from protesters has and should remain that the focus needs to be on protecting Black lives. Let us not forget that in all the chaos and national attention Oregon now finds itself in.

Your comments, published several years back, on what to do when confronted with unwanted cats on your property placed the burden on the property owner experiencing the nuisance.

The obligation rightfully belongs to the property owner who is containing, storing, a known nuisance on his property.

I come from an agricultural region.  It is established law that the property owner who contains a bull, or other animal that is known to be dangerous to an adjoining property, is creating a nuisance if their animal escapes their control.

Dog owners who fail to control their dogs, and said dogs worries sheep on an adjoining property, are liable for heavy fines and their dog is put down.

Here is my reason for writing.  The focus of this roaming animal nuisance discussion needs to change. The creator of the nuisance, cat owners who allow their pets to roam, need to be seen as the cause of the problem... not the property owner who objects.

Have you any information on whether the Bend City Council is open to an ordinance requiring owners to control their nuisance animals?

PS: Nuisance law is an area within property law. Basically, a property owner who engages on his property in an activity (noise, smoke, flowing or standing water, animals, etc.) that if allowed to escapes to an adjoining property, is guilty of creating a nuisance.

My name is Katrina and I am the Executive Director of the High Desert Food & Farm Alliance (HDFFA). In this article Yancy Lind was quoted saying, "There are no economically viable farms in Deschutes County. They do it for fun. They get all the water they want because they are senior, with big lawns, a horse, a pond. The farmers in Jefferson County have to let their land go fallow based on what a bunch of people agreed to over 100 years ago."

I'm writing to say this is an inaccurate statement and in fact we work with many farmers and ranchers in Deschutes County who make a living off of their farm, or if they can't they often have another household member (perhaps even themselves as well) work another job to make enough money to run their farm.

I realize that a subset of the Deschutes County population operates so-called farms in Exclusive Farm Use zones, as he described; but to make a blanket statement that there are no economically viable farms is inaccurate. A few amazing farmers/ranchers are Boundless Farmstead, Fields Farm, Sakari Farms, Central Oregon Ostrich, Central Oregon Veterans Ranch, Crump Ranch, DD Ranch, Deschutes Canyon Garlic, the list goes on.

If anyone is interested in learning more about the economic value, I co-wrote a publication with OSU entitled, "The Economic Impact of Local Food on the Central Oregon Economy."

www.hdffa.org (Click Find Local Food to find C.O. farms and ranches) and Tools (For a link to the study).

That is just great, lets fine somebody $100, $200, $500 in times where many are finding it hard to pay rent of buy food. Agreed, we should all do our part and wear a mask, but get real. There will be those who choose not too, fining them will not help. Government overreach for sure. One thing COVID has proven is that people with any bit of authority will overstep it. We are seeing this in many facets of our society in these trying times, sad so sad.

I was alarmed when I read something in your July 22nd editorial:  "As we pointed out in our June 18 editorial, Bend Police's use of force on Black men was four times higher than the overall Black population in 2019 – evidence that racial profiling can exist, even in little ol' Bend." Let's all agree, that's horrible if it's true.

We should all be fully aware that statistics can be used selectively to support whatever narrative the author wants to share. However, the statistics you referenced only account for the population makeup in Bend and fail to take into account the actual crime that brought the police and suspect together in the first place, and the behavior of the suspect during that encounter.   Thankfully you acknowledged that "arrests in any city inevitably include those who don't live in that city." But on a national level, Blacks comprise 13% of the population and according to the FBI, account for 38% of all violent crimes. That's a rate of almost three times higher than the overall Black population. I am not suggesting that Bend has a similar connection, however I think it's unfair to imply that, crime and behavior aside, you are significantly more likely to be treated harshly by our police because of your race. Sadly, we can no longer rely on the media to inform us, thoroughly and objectively. And far too many, particularly younger generations, rely solely on social media and the loudest voices to form their opinions. Even those of us who have the time and motivation to search out the facts have a challenge sorting through the political and social biases. Let all the facts see the light of day to enable us to make educated, informed decisions rather than get swept up in the hysteria surrounding all of us today.

Rick—Thanks for taking the time to read our recent editorial, and also to go back to the other editorial to learn more. While I appreciate your efforts to learn from our work, I think you're missing the point. Our country's justice system is still based on a model of "innocent until proven guilty," and thus, even if a suspect is accused of a violent crime rather than a more benign one, it is not for police to play judge and jury and to mete out "justice" in the form of force. Whatever the alleged crime, it's a cop's job to bring a suspect in, and to do so peacefully, whenever possible. Our job as reporters, meanwhile, is to state the facts. I believe we continue to do that as "thoroughly and objectively" as we are able, but kudos to you for highlighting a portion of our argument that may not have been clear to all readers!