More than two months after the killing of George Floyd at the hands of cops, we've explored and learned a lot about policing in the U.S. and in our own little part of the world. This week—tucked before and after our Best of Central Oregon ballot, our hugely popular readers' poll—you'll find perspectives from both the former and newly minted chiefs of the Bend Police Department. You'll also find a look at the role of police unions in helping police officers negotiate not just employment contracts, but the terms under which they're investigated or disciplined. These unions possess massive power, and sometimes guard information the public deserves to know. In addition, a local woman opens up about a civil case she won against the City of Bend and three of its officers, following an alleged incident of police brutality. While these are far from the only facets of policing worth exploring locally, the stories represent a wide range of perspectives and experiences around the issue. Thanks for reading! 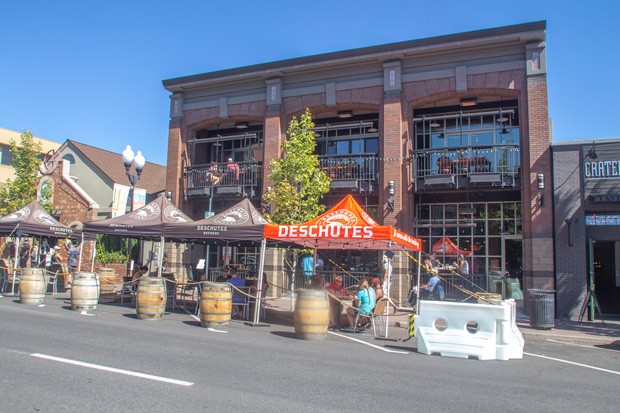 As clergy committed to peace and justice in Central Oregon, our sacred texts and values call us to walk in the footsteps of prophetic communities that did not rest until all were truly free. At the foundation of our faith traditions is this truth: all people are imbued with worth, value, dignity and a right to be free.

Out of that conviction, we are committed to listening to the voices of people of color in our city. So we have deep concerns about the process that led to Officer Krantz's hiring as Bend's new police chief.

In the midst of a national cry to reshape America's ethic of policing, Officer Krantz's hiring seems to disregard the strong preferences of community organizations in Bend, especially among people of color. He comes to our city from the Portland Police Bureau, a department with a reputation for protecting officers in incidents of police brutality toward people of color and a history of using extreme measures against unarmed protesters. We sincerely hope he arrives in Bend with a different ethos than the one in which he was trained.

We believe Bend could be a model city—for our state and our country—in adopting policies that move us toward racial equity, especially those outlined by Reimagine Oregon (reimagineoregon.org). For example, could Bend be among the first cities in Oregon to ban police use of pepper spray and flashbang grenades, thus paving the way for more innovative approaches elsewhere?

We say this without being flippant: this is a "come to Jesus" moment for police departments. Bend can either take that cue—listening to its residents with creativity and heart—or we can ignore this national moment and risk seeing the same violence we've seen in other cities. As our favorite preacher once said, "justice too long delayed is justice denied."

In the wake of violent tensions between civil rights protestors and local police departments, Rev. Martin Luther King, Jr., wrote those words in his Letter from a Birmingham Jail in 1963. It was addressed to the white clergy of that city. Today, we aspire to stand in solidarity with his legacy as it takes shape in the Black Lives Matter movement in all its expressions, especially here in Bend. They are giving us the courage to say that we cannot wait any longer; we must walk "with a sense of great urgency toward the promised land of racial justice."

City Manager King: We pray that you share this vision alongside us, even as we lament the blind spots in this process. We hope that you, City Council, and Bend PD can join us in the hard work of examining city-wide systems of power, law, and order for areas of latent white supremacy and outright racism that cause such blind spots.

Officer Krantz: If the vision we are casting—one that sees people as neighbors to love rather than "rioters" to be confronted, that values their freedom to peacefully resist over the securing of state power—if this vision aligns with your own, and you want to cast visions alongside those who cry for justice and peace in this city, we commit to working with you toward those ends.

Bend Community: Now is the time for us to move from support to solidarity and to disrupt the pseudo-peace of the status quo in order for all to be free and safe. Co-creating a Bend that is marked by justice, interdependence, and solidarity will take deeper reserves of resilience and resolve. It is our deepest honor to accompany you as we walk this road together.

After a great deal of consideration, I have decided not to seek reelection to the Bend City Council. Our city faces many challenges including managing growth, providing housing, preserving livability, and relieving traffic congestion. When I moved to Bend more than 20 years ago, one could afford a home with a yard where the kids could play. Now, only those bringing equity from big west coast cities can afford a home in Bend.


Skyrocketing housing costs make everything else expensive too – from coffee to groceries. While wages have risen to keep up with housing costs, the real standard of living has fallen for many. Our middle class shrank 10% in the last decade. Those on fixed incomes, like retirees, find themselves being priced out of their own homes.

I began and grew my software company in Bend from nothing to more than 50 employees. At one time, I marveled at Bend's affordability and warm entrepreneurial environment. If asked today, I would warn new businesses not to come to Bend. Find a community where your employees can afford to live; public officials value employers; and, private sector employment pays more than government employment.

New residents bring more than skyrocketing housing prices. Many also bring their opinions and judgements that corrupted their former homes and now threaten our way of life too. I fear that homeless camps, wide income disparities and other big city problems will soon come to a neighborhood near you – if they have not already. Bend has become a place where a vocal minority opines to the "deplorables".

With some naivety, I hoped my service on the council would alter our trajectory. I do feel a sense of accomplishment. After decades waiting, my efforts led to the construction of the new Empire connection. I also take pride in getting the Murphy road and many other street projects funded. We fixed our roads without a gas tax. I led the creation of the neighborhood street safety program and the formation of a city committee where livability issues could be addressed. I pushed for better strategic planning and management. I also encouraged our efforts to clean up downtown.

Ultimately though, a change in our trajectory requires leadership from the top, something we sorely lack. While I believe every member of the council cares deeply about Bend, more than care is required to address our challenges. We need a mayor with vision, skill and leadership experience. We also need city policy set by our elected officials, not city employees. From filling the council vacancy, to the handling of public safety concerns, to the city's COVID response, I feel we are adrift. While some would praise our subsidized housing initiatives, I simply reply that if they were so successful, we would see housing people could afford. Given the state of our leadership, I've come to the conclusion that the wisest use of my time lies with my business and family.

I appreciate the trust and support placed in me. My experience as a Bend city councilor touched me in many ways. I've encountered so many kind and generous people. I did my best to serve the people of our city. I look forward to completing my service and sincerely hope that the next council exceeds my expectations to address the pressing problems we face.

In response to City Council reelection

On his way out the door, it is unfortunate that Bill Moseley has decided to malign the critical efforts of hard-working city staff and his colleagues on the Bend City Council. It was clear in 2018, when Bill lost his bid to become mayor, that the majority of voters in Bend were not aligned with him.


I am proud to lead with a dedicated City Council along with brilliant City staff. We will continue to face and address head on many difficult issues that the public is well aware of. While I am sad that Councilor Moseley chooses to continually criticize our staff & council, I wish him well in his future private sector endeavors.