Wow, what a week. 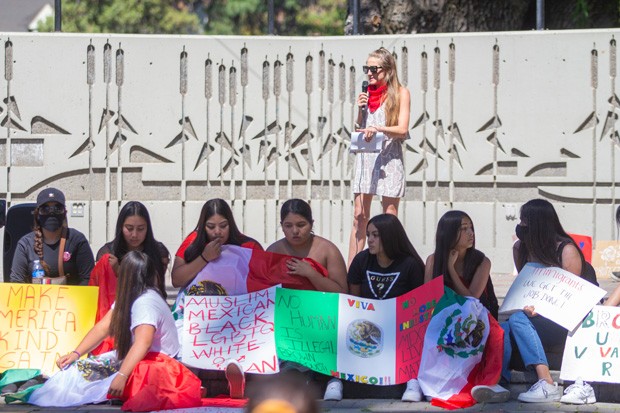 Do I find myself saying that a lot lately? Very likely, yes. These are unprecedented times, and it seems that each week, they get a little more unprecedented. Inside these pages you'll hear a plea from two undocumented students, asking you to vote and why it matters more than ever. You'll get our exploration of how ICE operates, and how last week was far from the only time they've rounded up individuals in our community. You'll get our opinion of what comes next after community members stood against federal troops. AND—our long-awaited Spanish News (Noticias Españolas) section arrives, just as a major event unfolds for the Latinx community. Meanwhile, read how two local prospective farmers won their battle to farm in rural Deschutes County. And to give you some relief, we've spent some time outlining some fun staycations that fall within pandemic guidelines. What a week! Like many people, I am already wondering what next week will bring...

So do people have a shot in hell in living here? Not if they are counting on the minimum wage —$12.00. Not if they're a low-income worker—Opportunity Insights calculated that earnings as of May 30 have decreased by 26.1% compared to January 2020. And, certainly not if they're financially insecure and looking for work—over the same time period, employment rates among low-income workers has decreased by 30.4 percent in Deschutes County.

If Bend wants to retain its sense of community—to hold on to the people that have long called this slice of Oregon home, then the city, state, and federal government need to take drastic action. Back in 2016, 1 in 100 renter homes were evicted each year in Redmond; the rate was 0.56 in 100 in Bend. Making the odds of eviction even higher was the fact that across Deschutes County rent took up about a third of people's incomes.

To Bend's credit, the City made several zoning changes to try to increase the housing supply and drive rent down—it wasn't and won't be enough. To Governor Brown's credit, the state passed a regional minimum wage law with regular bumps in pay to try to keep up with costs in living—it wasn't and won't be enough. And, there's no need to talk about the failures at the federal level—whatever support existed recently expired and has only been partially patched by President Trump's executive order.

The factors forcing folks to pick up and head to cheaper pastures have only grown in strength due to COVID. It follows that the inadequate supports afforded to Central Oregonians pre-COVID have now become tragically insufficient. Again, pre-COVID, the median wage was already short of a living wage—$24.01 to be precise. That average has surely fallen as jobs have disappeared and the economy has tanked.

The scale of the barriers to living and remaining in Bend have proven to be too high for traditional means of policymaking. It's time to make a universal basic income a reality for Central Oregonians. As more and more cities and counties adopt this new form of support, Bend and Deschutes County shouldn't miss the trend. It's in Oregon's political lineage to be an early adopter of ideas that demonstrate promise to increase independence and create stronger communities.

A universal basic income that frees more Oregonians to cover rent, child care, and the necessities also frees them to begin asking the very questions that will shape which communities emerge stronger after COVID: what new skills can I learn? What new opportunities can I pursue? What smart risks should I take?

All the while, it will reduce the need for expensive city and county services focused on keeping people in place and helping them relocate when their lives get upended. In other words, it pays to pay people. It's expensive to live in Bend but it doesn't have to be. A living wage can become a normal wage by following the lead of other policy innovators in communities blue and red, north and south, small and large and adopting a universal basic income.

RE: The Karens of Central Oregon Have Something to Say—and It's Not, "Can I Speak to Your Manager?" 8/13

I'm now at the point of changing my name, and I've decided that if this is still going on by the end of the year it'll be my January birthday gift to myself. Using it to describe a wide range of despicable behaviors and traits is ridiculous, but I absolutely will not be associated with a name that in any way implies racism. I literally had a customer service person snort on the phone the other day when I gave my name during a request for a tracking number. It's pretty crappy :-(

The use of Karen as a pejorative term meant to degrade white women is ipso facto racist and should not be perpetuated by the media. The English language is resplendent with appropriate terms to describe reprehensible behavior. I'm truly amazed that this slur has been so readily spread by local and national media, especially at a time when there is such a strong movement to raise people's consciousness.

RE: Advocating for Black Lives, in an Internship 8/13

Teaching history has always been problematic, more of an exercise of indoctrination than education. Books written recently, many of them directed to young readers, present a history more accurate and exciting than anything have been exposed to so far. Black Lives have mattered ever since this nation was founded. Blacks on their own and with the support of others have struggled for recognition and inclusion in realizing the promise of our Declaration of Independence. If we ignore this history and talk only about the present, we will be denying today's students a treasure chest of stories waiting to be told. Discovering this history will do more to bring together students with different racial backgrounds than just discussing current events. Making this happen calls for educational reform, freeing teachers to explore new ways to present lessons that engage everyone.

On the night of the protest our Mayor Sally Russell let the new Bend PD Police Chief speak for her. We were told federal forces were coming to sweep us out of the area and that Bend PD would do nothing. The crowd visibly tensed. She then walked away, surrounded by police into the dark night without a word to anyone.

Behind me a Bend mother had to console her 7-year-old daughter who burst out sobbing after watching our mayor disappear into the cold night asking, "Mom? Are we going to die?"

This is why Sally must be removed from office. I don't care what your politics are; a mayor also wears the hat of empathy and leadership.

Leaving children, mothers, and peaceful protesters to men with guns and batons, Federal Forces who do not live here, actual militarized wolves, is NOT leadership.

Sally, you let men with violence come into our community and terrorize little girls learning for the first time what participant democracy looks like.

Sadly, for that young sobbing girl she did not get to see what strong female leadership looks like. #resign

The Source has provided a community service by publishing a full statement, in English and Spanish, from Bend Police Chief regarding the civil disobedience event by Bend citizens who objected to Federal officials lawfully performing their functions in our community.

The cutting edge of peaceful, freedom of expression is where that "speech" interferes with Federal agents' duties to protect and serve by lawfully detaining persons who are themselves violating laws of the United States.

Enforcement of our laws should rely LESS ON FORCE and more on cooperation, and persuasive powers. Better training of police, reducing reliance of physical force, pepper spray, guns is essential to our continuation as a free people. And citizens need to be taught the difference between speech and interference.