Last week, we focused our attention on preparations for school. This week, embedded inside Laurel Brauns' news story on unions is more info on where we stand: Deschutes County has met the testing metrics three weeks in a row to begin the process of sending kids back to school. We, like many, are watching that development with interest. 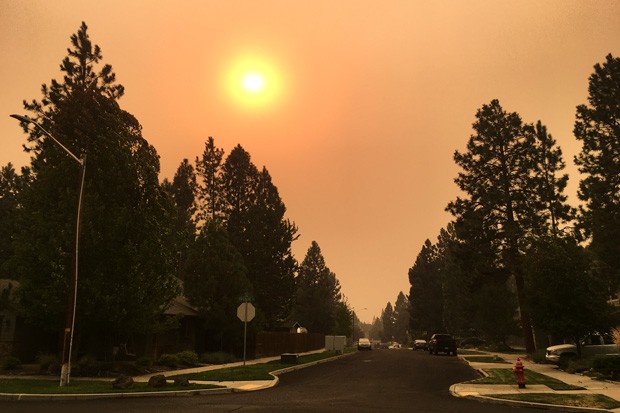 We're also tracking the fires surrounding Central Oregon; from Jefferson County and Marion County, and now, from Lane County and the McKenzie Bridge area. We're hoping for the best possible outcome, but the loss of homes—and even people's lives—appears to be the reality. Between COVID-19, the ongoing racial tensions and now smoke and fires, it's been a challenging summer, to say the least. If you get an evacuation order, take it seriously. Don't wait to prepare and get out, if needed.

Our most recent updates can always be found in your inbox every morning inside our daily newsletter, the Cascades Reader. Sign up at bendsource.com/newsletters.

Some people may think I, as a 5th grade teacher in rural Oregon, am least likely to deal with a drug crisis. Yet my reality is the exact opposite. You see, in Oregon, one in 11 people are struggling with drug abuse. Every hour, an Oregonian is arrested for a drug-related incident. These arrests are leading reasons Oregon children land in the foster system.

I do deal with the drug crisis and how it affects innocent children. This crisis is not an "urban" problem, limited to people who are homeless under bridges and on sidewalks in downtown Portland. It's happening all over the state, including right here.

Drug addiction leaves a wide wake of hurdles. It's not unusual for me to have one or more students in households where an adult is dealing with substance abuse.

No child—no matter how young—is unscathed by their family's challenges. These kiddos feel every bit of that weight and carry it right into the classroom. Leaving it at the door just isn't an option for them.

I see how this weight competes with their ability to learn and be part of the school community. One of the things that tugs at my heartstrings most is when a student withers from their educational potential. They've seen another system—the justice system—hurt their loved one, often the entire family. They know this system seldom means "good stuff ahead."

The ripple into our schools and communities is just one reason to rethink our response to drug addiction. Instead, addiction should be treated for what it is—a health care issue!

Right now, one of the biggest obstacles in Oregon's drug crisis is the ability to provide care for people who are ready to recover. Measure 110, which will be on the ballot this November, will expand Oregon's ability to provide drug treatment and recovery services to communities all across the state—including ours.

Measure 110 also addresses another important issue—the often-debilitating hurdles people deal with after they're hit with a charge for low-level drug possession. Even after someone finds recovery, their record still follows them, making it harder for them to find jobs, housing, obtain professional licenses, student loans, and more.

This measure expands access to treatment and removes unfairly harsh punishments for minor, nonviolent drug offenses, so people with addiction can more easily recover. People will no longer be arrested and put in jail simply for possession of small amounts of drugs. Instead, they will receive a health assessment and be connected to the right treatment or recovery services, including housing assistance, to help them get their lives back on track.

Measure 110 doesn't legalize drugs, and no change is made in the criminal code for delivery, manufacture and other commercial drug offenses. These offenses remain a crime. No change is made for other crimes that may be associated with drug use, such as driving under the influence and theft. One of the best parts of Measure 110—it is paid for by money already flowing into the state in the form of taxes on marijuana.

It comes down to this: Students have one shot at 5th grade, or any grade. Their home life is a huge ingredient to their success. Measure 110 means more support for parents with addictions, therein giving kids a better chance to succeed. It's just that simple.

Think of the good we could bring to our communities with addiction recovery for anyone who wants it. It would make my classroom, and classrooms all around Oregon, just a bit brighter.

—Anna Rhodes is an educator of 7 years in Central Oregon.

The County Commissioners' decision to move forward with these cases is puzzling and raises a few questions:  (1) How much taxpayer money has been spent to date to deny land-use permits for these proposed indoor marijuana growing operations? and (2) How much taxpayer money and County staff time will be wasted during the next phase(s) of this years long legal battle?

I don't know how many thousands of dollars the County Commissioners are prepared to spend to protect children from pot plants grown inside buildings but I do know that earlier this year Commissioner Phil Henderson and the Deschutes County Budget Committee refused to contribute $170,624 to the Bend-La Pine School District to help reduce youth suicide and substance abuse rates in local high schools.  We need County Commissioners focused on addressing real problems in our community.  This November please join me and vote for Phil Chang.

RE: Jim Anderson Pens a Farewell Column to Readers, 8/27

How fortuitous that I happened to make my grocery run to the Big City (LaPine) in time to see Jim Anderson's farewell column.  Jim and I go back a long, long way.

I was one of the teenaged science geeks that he mentored for two weeks, two years in a row, on that OMSI Science Bus.  While I already had a keen interest in the natural world, it was he that introduced me to Geology.

I was surprised, upon returning to Oregon two years ago, to see a column of his in the Sisters paper. "Jeez, he's STILL ALIVE?" I mused.

A couple of emails later, I went to see him at his Sisters home.  It was wonderful. He loaned me a rare & precious book by Thomas Condon, which I read cover to cover and duly returned.

He also gave me a signed copy of his book.  I shall treasure it forever.

Ken, Happy our lil ol' paper was something worth going to the big city for! Come on in for your gift card to Palate