Oregon—and the entire Pacific region—has been making national headlines again this week, and once again, it's not for anything good. Our hearts go out to the many families who have lost their homes in the fires that continue to blaze in Oregon, and to the ones who have lost a loved one or are waiting to hear. 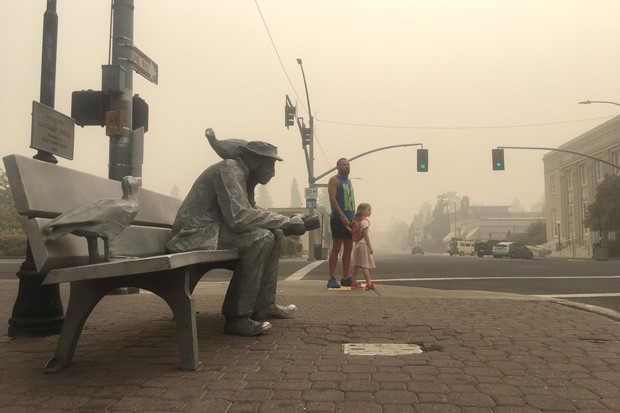 In this week's Culture section, Bend artist Bill Hoppe talks about his painting, "Unfathomable Loss"—a painting that could not be more aptly titled during this unfathomable year. For those hoping to turn the anguish they're feeling into meaningful action, we've assembled a list of recommended resources and donation points in our "Go Here" section on page 73. As we all continue to grapple with what this next calamity means for Oregonians in the long term, we invite you to catch our daily coverage in our email newsletter, the Cascades Reader—to which you can sign up at bendsource.com/newsletters.

Stay safe out there, readers—and also, enjoy our small dose of "good news," by way of this year's Best of Central Oregon issue.

Welcoming Week is a time to celebrate our immigrant neighbors and to reflect on why immigration policy matters to us all.


I'm the proud son of very lucky Chinese immigrants who sought a life here during a uniquely open and welcoming moment in U.S. history. My parents arrived in the U.S. in the 1950s essentially as war refugees. They grew up in mainland China during the brutal Japanese invasion of World War II. When World War II ended, a bloody civil war broke out in China and in 1949 two million Chinese Nationalists—including my teenage parents—were ejected from the mainland by the Communist party.

My parents came to the U.S. seeking freedom and opportunity in the nation whose Allied aircraft and pilots had protected them from countless Japanese bombing raids. Their allegiance to their new country grew as they settled in, built their lives, and eventually became citizens. My father was part of the generation of computer scientists that invented memory technology small enough to build a computer that could fit on a desk, helping to establish our nation's technological dominance for decades. He and my mother instilled a commitment to public service in me that has guided my career.

Immigrants like my parents contribute to society and the economy of our nation in so many ways. You can find them at work in health care, construction, science and technology, tourism, finance, agriculture, education and other sectors. But immigrants can only contribute if they are allowed to be here.

Between 1882 and 1942 the Chinese Exclusion Act barred people like my parents from immigrating to the U.S. During the mid-1800s Chinese laborers had helped dig the mines, build the railroads, work the canneries and tend the crops that allowed settlement of the Western U.S. But when economic conditions got tough in the 1870s, Chinese laborers were blamed for taking jobs from domestic workers and for driving down wages. Even after repeal of the Chinese Exclusion Act, the U.S. only allowed 105 Chinese immigrants per year in the 1950s. That window was big enough for my lucky parents to get through, but not very big.

Refugees like my parents who seek freedom, opportunity and safety can become loyal citizens. Hard-working immigrants can invigorate our workforce and strengthen our economy. How welcoming is the United States to immigrants like these at this moment in history? Are any windows open?

One of the starkest contrasts between the value of foreign-born workers and the welcome we extend to those workers can be found in nearby forests. Many of the workers who perform the hard, seasonal, migratory and sometimes-dangerous manual labor to clear hazardous fuels from the forest to reduce wildfire risks are either temporary H2-B guest workers or undocumented. They protect our homes from burning to the ground but our federal immigration policy doesn't offer them a home. What kinds of contributions could workers like these make if we treated them with dignity, respect and inclusivity?

I appreciate respectful dialogue, so thanks to Mr. Bill Boyd for his letter. Mr. Boyd focuses on U.S. "carrying capacity," yet theories claiming that immigrants disrupt an arbitrary population equilibrium have long been disproven. Today, geographers and demographers understand that man-made national borders don't align with environmental capacity. If Mr. Boyd is arguing that immigrants will overwhelm social programs, he forgets that undocumented immigrants account for 8% of all state and local tax revenue, while the richest 1% of Americans pay just 5.4%. At the same time, the majority of undocumented immigrants can't access social services and even documented immigrants routinely underuse programs they're eligible for.


Yet Mr. Boyd's argument also misses that when people flee by necessity, their alternative options for survival and decency have run out. And there is no "line" for them to wait in to come legally. The hundreds of migrants I interviewed for my book No Option but North were coming to the U.S. no matter what. The practical question is not how many people can the U.S. hold, but rather do we want to create avenues for those who will come to the U.S. regardless to do so legally? Or do we want people to continue to suffer the violence of the journey north?

While I never mentioned "open borders," I do see many "sensible solutions." To those who want to discuss further I invite you to join me on September 17 as part of the City of Bend's Welcoming Week.

In 1899 the ecologist Henry Chandler Cowles showed that small plants adapted to colonize sandy habitat on the Lake Michigan shoreline add nutrients and organic matter to the soil, which allows subsequent species to outcompete them and drive them out. These sand-inhabiting pioneer species can't think, and certainly cannot be faulted for orchestrating their demise. Humans, in contrast, pride themselves on an enormous intellect—often to the point of hubris, which may explain how we have become the only species in the long history of life on earth to knowingly sabotage its own life support system.


We marinate in tens of thousands of synthetic chemicals untested for health effects, many of which are found harmful after people are unwitting guinea pigs. We souse in the side-effects of fossil fuel combustion, including worsening heat, drought, famine, inundation, and wildfires. We spur zoonotic pandemics by destroying wildlife habitat.

There is little guarantee such problems will be met by mitigating leadership. To the contrary, the worse things become, the more insane the politician needed to protect the agendas of polluting profiteers.  The Trump administration has undone almost seventy environmental regulations related to toxic chemicals, air quality, fossil fuel extraction, and wildlife, with an eventual hundred on the immediate chopping block (https://tinyurl.com/ya5273ne).

In Greek tragedy, "anagnorisis" is the sudden realization of things as they stand, often after a prolonged period of ignorance or denial. The increasing dread felt by people these days seems an incipient anagnorisis, inspired by nature's escalating response to our assaults.

Matt- Thanks for your letter. Come on by for your gift card to Palate!