As is always the case in times of upheaval, some things that once felt like strongholds are now teetering on collapse. Other things are emerging as more important than ever. This week's Feature section showcases just a few examples of how some local businesses are winning—or sometimes losing—due to the changes afoot. 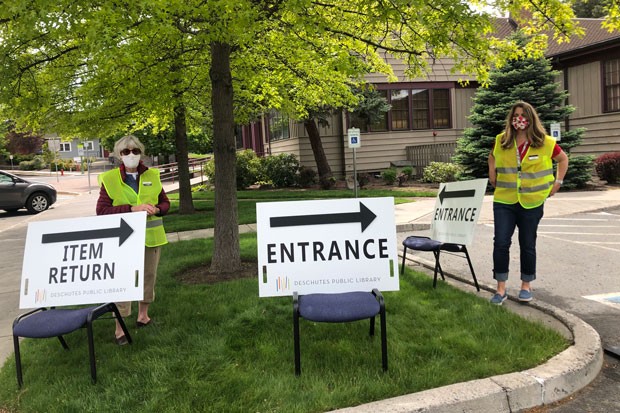 Here at the Source, we've long been strong proponents of a human-scale city that prioritizes multi-modal transportation—so being able to witness a discussion around closing downtown streets to cars is an exciting thing in our eyes. Many of our readers appear to agree; the story we published on it late last week online elicited many, many enthusiastic comments from locals who support making downtown a pedestrian zone. Read more about that in this week's Opinion, and be sure to catch the news update on our News page at bendsource.com.

I was SO STOKED to see Council adopt the downtown open streets concept as well as the Core Area Project (CAP) report!  So exciting. The grassroots energy around the topic was amazing to watch as the forward momentum towards the future of a revitalized central district swept through the Zoom session. I've lived and worked (as an engineer, BTW) in this neighborhood for years and have seen it struggle forward with baby-steps, fighting major redevelopment headwinds. Smart consideration and a strong framework went into the CAP, giving the needed tools and infrastructure investments for some exciting redevelopment opportunities while prioritizing affordable housing. It is an absolute goldmine for urban revival. Hats off, Council. I will say that Counselor Moseley lost my vote in the discussion—he seemed backward-looking and uninformed, suggesting further studies and more bureaucratic pause despite the mountain of good data presented by URAB in the CAP. Really!? MORE studies? We could have fixed some major problems in the time that we've been talking about this (and I've been in some of those conversations...) It is funny that it takes pandemic to shake us up enough to embrace a pedestrian friendly version of Bend.  It frustrates me when some seem to be looking backward, suggesting that we can somehow "make Bend great again" by not investing in the best vision of the future.  I hate to say it, but tens of thousands are coming, and there is no stopping them.  Let's put them in the Core, and not in their cars, right?  Go Bend! Your future is looking UP!

Since the river will not be closed, perhaps it's a mistake for Bend Parks & Rec to abdicate management of river access for floaters. Lack of managed tube rentals and shuttles will result in a free-for-all with crowding, parking and traffic problems. Rather than ad hoc chaos, well managed access might be better.

Below is written Public Testimony for the May 19, 2020 Board Meeting as per the Agenda instructions, please verbalize the following:

"In light of COVID-19, stay-at-home orders and general economic collapse in the 2nd Quarter of 2020; Please implement/support Rent Controls for the next 18 to 24 months to prevent large numbers of displaced people (homeless) from setting up camp in Bend's Parks. Findings of Fact were entered into the Public Record as Written Testimony on April 15, 2020 at the City of Bend addresssed to Umbrella. We should also consider Toll Booths and Testing Areas on major arterial roads into Deschutes County as a visitor management and finance tool."

My rules in any Apocalypse are pick up your crap and use common sense. If you can't adhere; don't go out in public or near other humans. Beware the 2nd Horseman because famine and scarcity take many forms like plague.

Never be scared of shadows lingering in the darkness. Remember, it was called the 'Dark Ages' because the power of Rome collapsed. What happens if the POWER goes out on all of US? It might be DC instead of BC. Lead, follow or get out of the way. Humanity and leadership have devolved into Idiocracy (20th Century Fox; 2006. Film).

Bend should use this crisis and budget cycle as an opportunity to chat about how alcohol, tourism, housing and crime are interrelated. Thank You!

I think the biggest issue, NOW, is the supply of N95 masks and COST of the mask. Luckily, I had one N95 mask that I bought two years ago for $40 to protect me from smoke and particulates during wildfire season. I started wearing it recently due to the COVID 19 outbreak because there weren't any masks to buy (The health care system is getting most of them and that is OK with me because they are on the frontlines of this PANDEMIC) but as the first commenter states they are easy to make by medical suppliers who are more able to maintain quality manufacturing. Cloth mask are unreliable and their quality is suspect because so many people are making them at home but even these are better than nothing. Even after this cycle of the COVID-19 settles down our country needs to have supplies ready for the next one.

"They" cry 'tyranny' when asked/told to wear a mask, yet they stop at a road construction site for a man holding up a tin STOP sign, and don't cry 'tyranny' for that... What's the difference... Government is requesting in both cases!? ... and 'safety' is at issue in each instance...

It doesn't hurt anything to wear a mask, why not wear one? I don't see any issues? I think people just want to complain on both sides. Whether you wear a mask or not is your right, it's still a free country even if you want to be a dumba$$. Just put it on, name it the anti-snowflake melter if that makes you feel better.

Lou: The Letter of the Week is yours for your creative use of "anti-snowflake" in a sentence. Call us before you come in to grab your gift card to Palate!