In Response to, "Public Health of Pharma Profits" on 4/24

The anti-vax movement has hit a fever pitch. We are now reaping the results of allowing a segment of our population to resist the very serious public health benefits of vaccinations. Diseases that were close to eradication are now in resurgence and the resulting public health emergency is real. 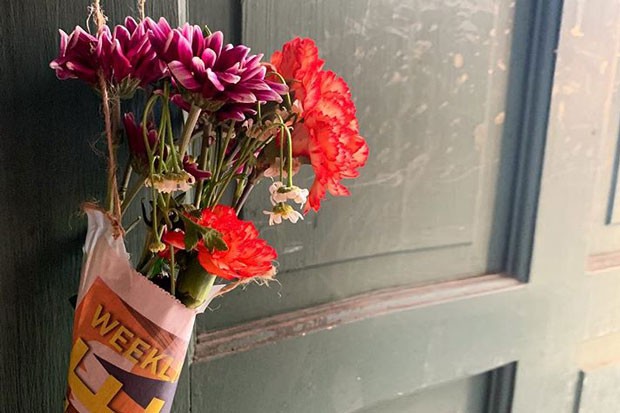 As most arguments without real scientific merit, this article traffics in the usual strategies; false equivalency, disingenuous concern for loopholes in the proposed law, repudiation of professional medical science and assertions of a Big Pharma/government conspiracy.

Universal vaccination in the United States is responsible for the eradication or near eradication of deadly and disabling diseases i.e. polio, smallpox. Undermining the success we have had is short sighted and is having negative effects that will only increase.

It should be mentioned that the law does not prohibit a medical reason for abstaining from vaccinations. If there is a real medical reason, have your doctor endorse it.

Appreciation to all who have made changes to reduce their carbon footprint, addressing climate change. Problem is- individual actions are not enough. We need industry and businesses to participate. We need a national policy change from the government that garners widespread participation to effect the scale of change scientists tell us is needed by 2030. We need an incentive that inspires us to work together for a solution- a clean, low carbon economy.

The Energy Innovation and Carbon Dividend Act HR 763 is gaining traction in the House of Representatives with 34 bi-partisan cosponsors. It would drive down carbon pollution, bring climate change under control, and unleash the power of the American free-market innovation and ingenuity. The carbon dividend would put money directly into people's pockets every month to spend as they see fit, helping low and middle income Americans to transition to lower carbon choices.

I will. I volunteer. The next time Mark H. Winger loses one of his commodities to a wolf, he can send me the bill. Two conditions: 1) satisfactory evidence it was killed by a wolf, and 2) he has to spare said wolf.

For someone to say a wolf is "trespassing on private property" is laughable and terrifyingly ludicrous. The land was the native peoples', and the wolves and their ancestors long before it was exploited by this modern society.

Regardless of what the paperwork states, you don't 'own' your land, you're merely renting it. You may have to learn to forgive the wolf, who is rightfully here, for not honoring your posted signs, for slinking under your fence, or stepping over the invisible line in the dirt. He or she is just trying to put food on the table too, and in its mind, your table is no more important than theirs.

I'm not all "touchy, feely", and I don't think they're "cute". But I do admire and respect them as a fellow creature on this planet for their survivalist efficiency and place in the ecosystem. And sometimes, for their lack of emotion.

I found Mark H. Winger's views regarding wolves "trespassing " on private land truly astonishing. Considering that wolves have been in North America some 750,000 years, and European settlers arrived in Oregon less than 200 years ago, I am inclined to ask, just who are the actual trespassers?

The first three letters to the editor in the last Source Weekly could have been written by the same person—pushing to murder wolves, defending the Trump crime family, and mocking climate change alarmists? Wow. Meet this type of person (the small minority with power, still) in a documentary called Cost of Freedom at www.21paradigm.org. See how their victims are faring while they hold power to murder, lie, deceive and thieve. This is your country. I came here from South Africa. In my first decade as a U.S. resident I was shocked and heartbroken over the bloodlust, hatred and persecution of wildlife. In my second decade I started to understand the politics of it. The vast majority of Americans want the violence to end. If you want peace, vote for it. Vote to protect wolves, vote to oust Trump and vote with every dollar you spend—or don't spend—on climate change.

As I finish my third and final term on the school board, I am proud of the progress and relative health of our local schools. We have a talented Bend La Pine Schools team working to improve the lives of our amazing 18,500 students. But I believe we are at a breaking point.

I joined the board just as we began the great recession, and we made many painful budget cuts in those early years. Surprisingly, in spite of a full economic recovery, we still have not returned to pre-recession class sizes or a full school year. The intervening years have been marked by a steady disinvestment in K-12 education.

Meanwhile, we've adapted curriculum, increased our graduation rate, improved security at our school facilities, and responded to a dramatic increase in mental and behavioral health needs. And teachers are maxed out—the profession has become more stressful and demanding than ever before.

It's time to fully fund education. An investment in education now will combat future poverty, homelessness, crime and incarceration. When we reduce class sizes, teachers and staff can strengthen each child's connection to school and learning. Investing now will mean we can better address the social and emotional needs of students. Investing now will help us bridge the gaps for our most vulnerable children and offer programs and electives to energize and broaden their school experiences.

I invite you to contact our legislators and insist on better K-12 school funding.

Letter of the week

Peggy: Thanks for your letter. Come on in for your gift card to Palate!

And readers: It never hurts to know where your legislators stand. On the Student Success Act, which came up for a vote in the Oregon House May 1, local Reps. Helt, McLane and Zika all voted against. The Oregon Senate votes next.