What makes us tick here at the Source Weekly 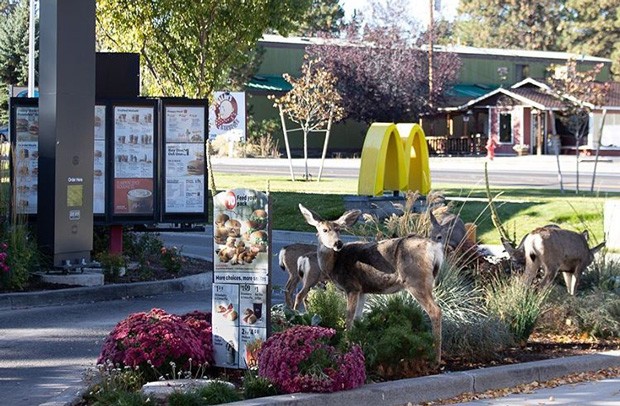 Being a voice for our community—and especially the underrepresented in our community—is what makes us tick here at the Source Weekly. You'll see it in our coverage of race issues, diversity and equity in the outdoors, the housing crisis, commuting away from cars or any number of issues centered around social, environmental and economic justice... but we can't do it alone.

Partnerships with media outlets statewide, and across the nation, offer an even wider portal to the tales that deserve to be told. That's why this week, we're taking part in an annual tradition among the weekly press, publishing Project Censored, a compilation of some of the biggest stories you might not have heard this past year. Turn to our website for even more of the coverage—as our print edition only holds so many pages to publish this important information.

There's been some talk lately about naming the new high school here in Bend. I've heard that there will be a voting process but I don't really know who will be handling that. I think that our own Robert D Maxwell would be a great choice for a name. Robert D Maxwell was a Medal of Honor recipient in WWII. He was also a teacher at Bend High School and COCC. If you don't know who he was then please Google him. He was an incredible person who deserves to be honored.

The homeless problem is beyond help so it seems. I lived in San Francisco, a city cited for being too liberal on homeless. Camps are found next to your home or in a park across the street. Many are screaming at themselves, waiting for free food and medication. Friends living in Portland have said, they love the area except one thing: The homeless are big problem. In Eugene I picked up the Weekly paper. The front page article announced, "No Place to Turn. Eugene's mentally ill homeless are arrested, hospitalized, release and ignored." In Bend, our small but growing town is getting to this same point. Homeless camps are found on the corner of Bond and Oregon Streets. Homeless young people are living on city property by Crows Feet Commons. When it's icy and they slip, suing the city, are taxpayers liable? Tourists walk cross the street to get away only to find homeless on the public bench leaving no place to sit. They scrounge dumpsters all over town. Homeless beg at the Costco parking lot and at the stop on Bond and Franklin. In garbage ridden lots near Jackson's Corner East, people are living in their vehicles. I saw a homeless man in a wheelchair parked in the middle of the street with a blanket over his head. Hours later, the man was still there. I saw similar by Worthy Brewing Company. Most residents in Bend can add to this list. I choose not to live in a town with a huge homeless "problem." It is not a crime to "hang out" on the street, but on every bench, every corner, stopping me to ask for money? This situation certainly can't benefit anyone.  We all know the problem, but What Is the Solution?

Businesses that hire live musicians but fail to turn off recorded music are being disrespectful of and rude to the musicians they hire.  That is like inviting someone to play a guitar in your living room while you keep a radio on in the kitchen. Two unrelated songs playing simultaneously create cacophony, an unpleasant and discordant environment that does not encourage spending time or money in. Civilization has become so inundated with sound waves that many people have come to accept cacophony as normal and constant while disregarding its disharmonious effect on their subconscious moods and emotions. Some people may be able to consciously block it out, but I cannot believe that anyone enjoys cacophony.

It's an easily remembered formula: less noise pollution, more money spent; more noise pollution, less money spent. To maximize customer satisfaction and the money they spend, managers of brewpubs, restaurants, and bars should turn OFF—not down—their recorded music while their paid musicians are playing their hearts out for their customers! Food and beverage managers PERMANENTLY drive musically oriented and sound-sensitive customers away by not doing so!

Beach volleyball? Naw. Sand volleyball, we are in a desert. The beaches are miles away, but we make it happen. Volleyballs fly high, bodies dive and skin crisps in the sun. Most importantly, people connect. I'm among a large majority of players who hadn't played much volleyball beyond, what we call "BBQ ball" or just simple "indoor." I started playing down at the "Old Mill sand courts" about seven years ago. I was 22 and still in college at COCC. The warm sun rays, challenging game and inviting personalities pulled me to that sand. It was quick. Not my technique. Not my knowledge of the game. But my love for it all. The amazing spot (thank you to the Old Mill and the founders) where the sand courts sit has seen many bright-eyed, energizing humans. It's like a step into a surreal world. Rising high in the sky, we've all seen them, those triple stacks stand over us like watch towers. The flag is also an excellent indicator for the wind's speed and direction. With live music steps away and a centralized location the courts will truly be missed. Alright, although our Central Oregon land is full of juniper and sage, and devoid of saltwater and seagulls... We play beach volleyball. We look west to the Seaside Volleyball Tournament every year. Our group of sand sharks is small but if the grains combine with the surf we can keep welcoming new faces and form a beach in Bend.

Thanks for the dispatch from the sand shark community, Chuck! Come on in for your gift card to Palate.