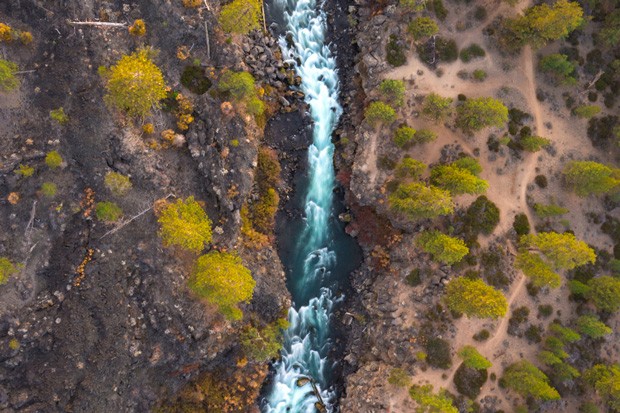 GIVE A DAM
IN RESPONSE TO: SEARCHING FOR WHITOPIA, 10/17

In regard to the Patagonia sweaters seen throughout Central Oregon. I would like to call attention to the point that this city has a river flowing through town and three dams on it. Patagonia's philosophy is against dams in regard to river continuity and many people wear their logo in support of this, some hoping to see a return of the diversity of fish here. I moved to Bend as a child in the recession of 2008 as a way for my family to weather the rising prices in Hawaii. Now, things are very different here as prices in Bend push other families to new locations. I would hate to see the passions of Bend be left behind or whitewashed and marked-down as trend.

BETRAYAL OF THE KURDS

The craven withdrawal from Syria and our abandonment of our Kurdish allies is clearly an example of a decision made without thought or care, much less coordination with our allies. This action has been a sad example of the destructive approaches (one can hardly say, "policies") to international relations and our national security by the Trump Administration. I am particularly sensitive to such dishonorable behavior. Some of my 30 years as a Regular Army officer was spent serving in Southeast Asia with our allies, the Meo tribesmen of Laos, the Free Cambodia movement, the anti-Communist Vietnamese, and others). We left these brave allies to the North Vietnamese, the Khmer Rouge, and the Pathet Lao. Now, we betray the Kurds, fierce fighters who bore the brunt of the campaign to defeat ISIS. As they face brutal attack by Turks, they are attempting to survive by making arrangements with Bashar al-Assad and his allies, the Russians. This abandonment is not only immoral, it is freeing hundreds of the most radical ISIS fighters. These zealots will almost certainly be heard of again through the deaths of Western Europeans and perhaps Americans.

So, these statements by Trump that he would "obliterate the Turkish economy' when in his, "great and unmatched wisdom" the Turks perpetrate actions he considers, "off limits" has meant nothing. And, while he has decried "endless Middle East wars" he is sending 3,000 additional troops to Saudi Arabia, presumably to fight and die to protect the royal family. Are we now mercenaries?

From our earliest indoctrination; our mainstream education, we are taught to strive for class mobilization. You believe that you stand at one point of reference and by accumulation of wealth and material goods you move upwards on a social ladder. Class structure is one of the most lucrative and divisive constructs ever conceived. Classism rewards only monetary gain and degrades community. A classist society keeps racism in place, it keeps nationalism in place, the base for fascism. We call for working class unity. A power structure on a horizontal plane, that no state can dismantle. To realize we all play a part in making society healthy, from custodians to doctors; chefs to therapists; houseless to landscapers. We are all one no matter the color, creed, language or ability. The people united have all the power.

IRRIGATION DOES NOT MEAN AGRICULTURE IN DESCHUTES COUNTY

The U.S. Department of Agriculture performs periodic nationwide surveys of agriculture that are broken down to the county level. The latest survey was released in April with data as of 2017. It clearly shows that most irrigators in Deschutes County are not "farmers" in any traditional sense of word.

This detailed report says that there are 1,484 farms in Deschutes County, 1,269 are irrigated. Half of these farms are under 11 acres in size. Only 216 are over 50 acres; 685 of the farms have annual sales of less than $2,500. The average farm had losses of -$12,866. Irrigators currently take 90% of the water in the upper Deschutes but in Deschutes County farming is often a lifestyle choice or hobby, not the viable production of agricultural products.

Everyone has a right to buy land and pursue their hobby, but this data clearly shows that viewing water distribution through the lens of fish vs. farms is deceptive at best. It is also important to know that many of these landowners would gladly give up their water, or at least greatly reduce their allotment, if they could. Irrigation districts simply do not allow this.

Per Oregon law, all water is owned by the public. Irrigators have the right to "beneficially" use that water, for the benefit of the public. The USDA survey raises some basic questions about water use. Why should hundreds of millions of taxpayer dollars be spent to subsidize someone's hobby as required in the Habitat Conservation Plan currently out for public comment? Today, Deschutes County has a lifestyle economy; our incredible growth is due to the quality of life that can be found here. Clean, ample water in our rivers and creeks is an important element of that lifestyle.

To be clear, I am not advocating that water be withheld from any farm, but it is past time that water be distributed in a way that is beneficial to the public in a modern sense, not based on 100-year-old laws written when Central Oregon was first being settled. The Basin Study Work Group identified ways this could be more quickly accomplished, at lower cost, than proposed by irrigation districts in the Habitat Conservation Plan.

Yancy: Thanks for bringing this to our readers' attention. Come get your gift card to Palate! Those who are interested in commenting on the draft Deschutes River Basin Habitat Conservation Plan have through Nov. 18 to do so. Look for the link and info on the U.S. Fish and Wildlife Service's Oregon Fish and Wildlife Office page: https://fws.gov/Oregonfwo/