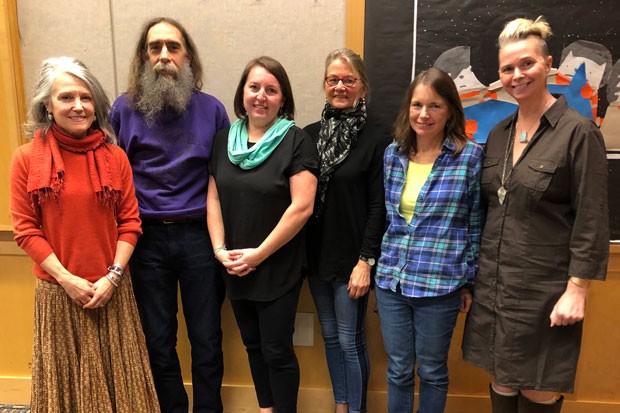 In addition to being Thanksgiving week, November is also Native American Heritage Month—declared so in 1990 by President H.W. Bush. To mark that, this week's issue reserves some space to tell tales of local indigenous people doing important work in the community, as well as other stories of sharing in some Thanksgiving-related fun.

Thanksgiving also marks the official start of the holiday shopping season, so this issue also aims to encourage locals to Shop Local and support local business on Shop Small Saturday—or any day, really. It's good for local business, and the local economy, and as one story here demonstrates, it doesn't always require a visit to a brick-and-mortar store.

From all of us at the Source Weekly, we hope you have a great week filled with nourishing food and productive dinner-table conversations that unite, rather than divide. It's a tall order, to be sure... but you got this!

To be a newspaper editor is to have the power and responsibility of helping to guide discourse in a community, not a lightweight job for sure. It requires knowledge, wisdom and vision. Unfortunately, The Bulletin was lacking all three in a November 13 editorial.

On Nov 6. Bend's council saw a packed house of constituents sharing their concerns for cold weather shelter, addiction, climate crisis and more but what caught the editor's attention was a discussion of an image used in connection with a transportation survey being conducted by the city. Simply put, the City of Bend decided to use an image of a covered wagon referencing the colonization of Oregon with a pun making it clear that the target audience of the city's survey was white people that connect with the message of "settling the West."

When the City of Bend sees history and present day events like the transportation survey only through a white lens, it is a disservice to all of us, and that is why some folks (including myself) step up to tell a more rounded perspective of the impact that imagery and messaging like this has on marginalized communities.

During and since the meeting, city officials have expressed a willingness to dialogue, to learn and to work to avoid being "insensitive to the displacement of native people' in our region."

For its part, The Bulletin took offense at the critical questioning of Oregon's history while completely ignoring perspectives of communities of color living in Central Oregon, including descendants and survivors of genocide, people indigenous to this land and still rightful stewards of it. In doing so, the paper fanned the embers of white defensiveness and hostility rather than helping the white community confront the fact that many of their ancestors did heinous things, that they were not just settlers but oppressors.

The editorial lacks any accurate historical reference to educate an audience possibly ignorant of the genocide that came with colonization, or the racist laws that marked Oregon since the earliest days of Oregon statehood. Instead, the editorial was quick to call for action to defend an idealized white narrative. Sadly, and ominously, such a failure of vision and integrity aligns well with the rhetoric of white nationalism.

Regardless of intent, a negative impact on marginalized communities is what's to expect when white nationalism ideals are coming from the editor's desk.

When reduced to its simplest aim, the proposed Deschutes Basin Habitat Conservation Plan appears to be a request for a Get Out of Jail card for the 8 irrigators and the City of Prineville. They are asking USFWS to allow them to continue draining the river thus killing the fish, frogs and insects that rely on that habitat.

There may be some proposals to save and reallocate water in the plan but basically it is an attempt to avoid lawsuits while continuing to figure out a way around the centuries old allocation of Deschutes River water that the people of Oregon own in common.

USFWS should not grant a permit to allow legal killing of endangered species – not for 5 years or the 30 years proposed.

The plan to build low rent housing for seasonal employees working at The Lodge and other businesses in Sunriver merits approval. The parking issue is moot as most of the workers won't have autos and the Resort is offering shuttle service. It is also a short walk or bike ride to their places of employment.

DUIIs are not a "Rite of Passage"

We have to be responsible and plan ahead in this wonderful beer town! There are a lot of places to drink alcohol listen to music and activities to entertain us. Uber, cab and wonderful designated drivers are a big part. The buzzed driving bothers me a great deal a person can get pulled over for made up reasons. Remember the pothole disaster including Newport and Portland avenue? We were dodging the holes and drivers were getting pulled over and asked if they were drinking! Make sure all your lights are working and watch over your friends and take away their keys. Let's be responsible and use the buddy system you see those kindergarden kids holding hands walking with those teachers during school hours. Well, let's be adults; walk if you can. If you drive to a drinking establishment, get a ride to your car the next day. Be safe and party on!

I loved the Source Weekly's Tournament of Side Dishes report in the November 21st edition. However, I think that the Rules Committee should put an asterisk on the win by mashed potatoes on the grounds that it got an illegal assist from gravy, which is no small matter because gravy made it all the way to the semi-finals before being defeated by stuffing. Furthermore, because no one eats mashed potatoes without gravy if gravy is available, and no one eats gravy like soup, I ask that the Rules Committee make mashed potatoes and gravy a single side dish in future tournaments.  The tournament would be fairer if steamed broccoli replaced gravy as a single side dish

Let's face it:  mashed potatoes only won because voters included gravy with it in their mental image.  If the side dish had been mashed potatoes without gravy, it would not have won the tournament.

Eddie: The Rules Committee duly heeds your request and will note such assists in future tournaments. I mean, gravy truly doesn't get anywhere alone... But steamed broccoli on this holiday?! Come on...