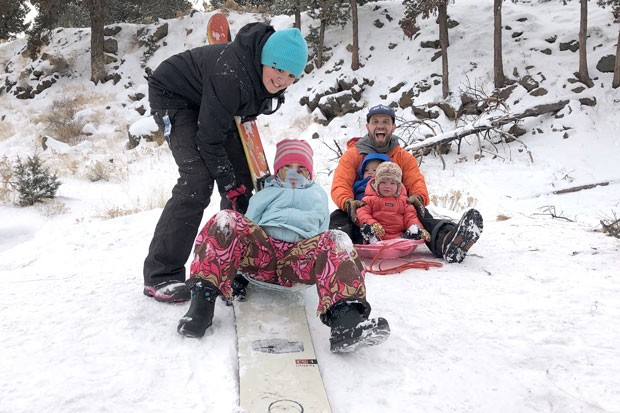 Getting this paper from newsroom to printer to you takes a battalion of dedicated individuals—especially when the snow hits hard, as it did last week, just when we began distribution. Because of that, I’d like to take a sec to say thanks to the hard-working, hard-driving people who ensure the Source Weekly gets to every one of our 518 drop sites, every week.

First, a shout-out to truck driver Melchor Mendez who drives from our printing press in Yakima, Washington each week—rain, snow or sleet. David Hill, Jennifer Crosby and Josh Gatlin routinely drive through adverse conditions in Bend, Redmond, Sisters, Sunriver and beyond to deliver the paper close to home, and Shane Osborne brings the paper to Prineville. Cheers to our fine distribution team for persevering through a snowy week!

I think Cascadian Darks are a different animal from merely black IPAs though. According to beeradvocate.com. (Goldman-Armstrong is the co-inventor of the CDA style.):

In early 2010, Goldman-Armstrong organized a CDA symposium in which brewers and beer writers tasted, discussed and finally built a consensus on the style's characteristics. For one thing, they agreed, a CDA must be something more than a simple IPA that happens to be black. A brewer can achieve the color without added body simply by cold-steeping dark grains or—as in some dark lagers—with de-husked black malt, neither of which provide adequate roasted character, they said.

And for another, CDA must be brewed with the Northwest's distinctively aromatic hops, including Amarillo, Centennial, Chinook and, yes, Cascade. This wasn't just a matter of local pride. When the resins of Northwestern hops mesh with the roasted malts, said some brewers, they tend to produce an almost minty or rosemary quality—a quality that is missing when the ale is made with British Fuggles or East Kent Goldings.

"It's a very different beer," Goldman-Armstrong said when I asked him if he could taste the difference between an IPA and a CDA with his eyes closed. "If you have any palate at all, you should recognize it's a different beer from standard India Pale Ale."

It would be great to also look at the potential benefit the HES will have, by calculating the average monthly electric bill, and the potential of say a 10% or 20% decrease in it by following some of the recommendations from HES that are easiest to implement. Do we have any data on this?

That would make a great comparison against the $175 cost—which I have to say I'm surprised COAR is bringing up as a large concern. I would think (and hope) COAR would be on board for serious action on the climate crisis.

If someone gets a low score, they are not required to fix it (can you imagine the pushback if that were the case?!). It will, however, give someone looking at that home a heads up on what they can expect their energy costs to be and a list of potential improvements they could make so they can factor that information appropriately into their buying decision. Some homes with a lower score, with a few energy upgrades, may still cost less than a home with a higher score.

Without knowing what energy improvements make sense for the home, the average homebuyer would never be able to weigh all those variables to figure out which is the better deal with just information from a call the utility companies.

The plan does call on the City to lead by example with electric vehicles—if you want to see more efficient vehicles, you should let them know!

—The Energy Challenge via bendsource.com

I would like to nominate Joe Kim of 5 Fusion for Best Chef for 2019. I feel his creativity, experience, diverse knowledge and devotion to his craft more than qualifies him. Also being in the industry I have worked at many well-known restaurants in Bend and Portland. I have worked with the best chefs in Central Oregon and spending over 20 years in the culinary field I feel my opinion is valid and unbiased. I just think he deserves some acknowledgement for his hard work and creativity is all. Thanks hope you consider Joe Kim for 5 fusion.

Drew—While our Best of Central Oregon issue isn't for another nine months, I'll give you the letter of the week so you can "award" Kim a coffee from Palate... if you're so inclined!