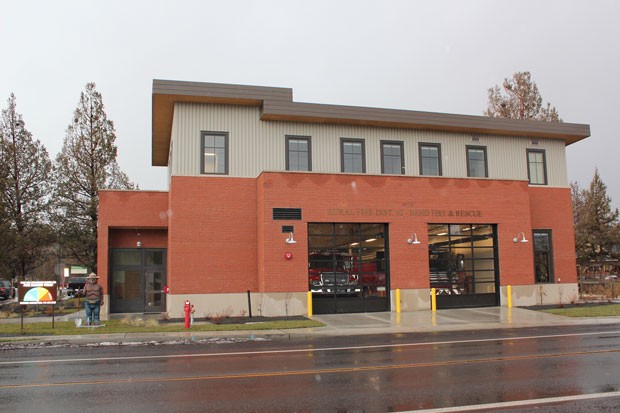 From all of us at the Source Weekly, we hope you're enjoying time with friends and family and reveling in the beauty of Central Oregon this holiday season. We'll be on a slightly amended distribution schedule over the next two weeks, but you can be sure that, like always, all stories published in the print edition will be available online by Wednesday at 3 pm, as they always are (in addition to the many web-only stories we publish each week—go check them out!).

I also want to express my gratitude and admiration for the staff that keeps this paper running year after year, and to share an anecdote that I now regret. In the spring of 2018, staffer Richard Sitts did a story featuring Donavan Adderley, the father of a teen, Deshaun, who killed himself in December 2017. Sitts wanted to extend the story to a feature-length one, due to the gravity of the situation that Donavan described. I declined, putting the story in its planned place farther back in the issue. I made the wrong call. Deshaun's story is ongoing and important, and I only wish I would have given it even more ink back then. Look for more ink on the story on page 4 of this issue.

Hug your loved ones tight this holiday season, Central Oregon, and then get back out into the world and make it a better one.

The foundation of fascism is a charismatic leader who demands total loyalty and declares himself above the law. Facts, truth, justice and human rights are marginalized.

A fascist leader claims to be "The Chosen One" to whom everyone must pledge allegiance. Social contracts such as a Constitution exist at the will of the leader. Separation of powers is eliminated; separation of church and state is blurred.

Freedom of speech and assembly are restricted. Protestors and journalists are intimidated, arrested, imprisoned and murdered. Voices of dissent are silenced.

Fascist leaders gain power through fraudulent or rigged elections, manipulation by corporate and state-controlled mass media and the economic power of wealthy donors and corporations.

Fascist leaders sustain power by isolating themselves in a cocoon of cronyism, corruption and nepotism.

Laws criminalize people of color, immigrants, homeless people, unacceptable religious groups and others not in The Master Race.

Fear, intimidation and repression function to control the population in the "homeland." A police state is empowered and emboldened to squash dissent using surveillance, arrests, mass incarceration, concentration camps and privatized prisons.

Support of the arts is essential to the health of a community. We in Sunriver are fortunate to have The Door and recently The SHARC where the musical version of The Nutcracker was recently presented for five shows including a sold out dinner show and performance.

We should reform the presidential primary process in time for 2024 by instituting a rotational centurial schedule whereby every state will finally have the opportunity to be one of the first two states to vote.

Rotating the states would bring a much needed, overdue element of fairness to our primary system by giving each state (no matter how sparsely populated) a period of political relevance.

Also, moving Iowa and New Hampshire out of their unwarranted privileged political positions at the front of the line would help make the process more demographically representative of the nation at large.

Here's an idea of what the first two states' rotational schedule could look like over the course of the next century.

RE: Portland is Finalizing a Deal to Use Tourism Dollars to Battle Homelessness. It's a Precedent Central Oregon Should Follow. 12/4

Whoever wrote this, I LOVE YOU. Seriously, I have wanted scream at this city for years, especially after the transient room tax passed with funds going to Visit Bend. This is by far the most critical homeless article from a local source that I have read in over a year. As someone who has spent many nights outside in snow in this city... thank you.

Your article reminds me of the public-private partnership that produced the $9.6 million Bend Whitewater Park and the potential the idea could represent.

In Portland, $3 million of $3.5 million in private funds were raised in a public-private venture to open the Harbor of Hope homeless navigation center. By one person.... the CEO of Columbia Sportswear. Not to single anyone out, but REI has a huge store here.

The marijuana industry made $82 million in Oregon last year, and in Bend it also thrives off of our local tourist economy. There are significant interests here that have real reasons to pitch in. And some have. For example, our Builders and Realtors Associations competed against each other to help raise funds for the renovations at the Bethlehem Inn.

A public-private partnership to tackle the problems inherent to homelessness would benefit all. The amount of collective funds put into cleaning up abandoned camps, post incident healthcare, law enforcement, judiciary and jail costs, and more, could be effectively reduced. From low barrier camps to navigation centers (like the Harbor of Hope) to Housing First models, more tools exist than this community is implementing. Why wait to spend millions afterwards, when you could spend less and alleviate things now?

Thanks for your letter and for pointing out what's worked out there. Come on in for your gift card to Palate!