A few months ago, our team was doing a vision session about the special issues we wanted to tackle in 2020. It surprised me to hear the words, "We should do a money issue" tumbling out of my mouth. We're a local paper and not a business or finance magazine, after all—so why would we take on such a topic?

While lots of spit-balling happens in vision sessions, I think the kernel of wisdom I had back then was rooted in knowing that too many of my Gen X and Millennial friends find themselves despairing at their financial prospects. Bend real estate is too expensive for them. Child care costs are crippling them. Saving for anything beyond the next pair of skis seems daunting. While putting out a Money Issue isn't going to solve the world's (or Central Oregon's) financial problems, I believe taking this issue on locally, and offering a few bright spots in the way of entry points to saving, side-hustling, investing and the like is an endeavor worth doing. Read on and see if you leave feeling a bit more equipped to face the future. 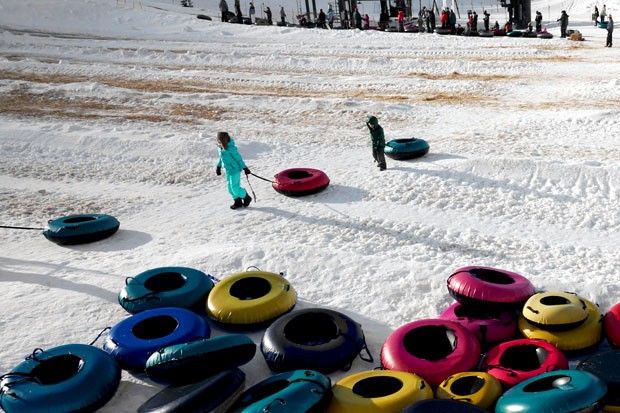 Over the past four decades, Central Oregon warmed annually by 1-2 degrees Fahrenheit. Collier Glacier on North Sister lost 75% of its area over the last century. The two changes are related.

At humanity's current carbon emission rate, climate models predict that Central Oregon may warm by over 9 degrees Fahrenheit by 2100; this is equivalent to raising the annual snowline from the lowest ski lift to the top of Mt. Bachelor.

The snow- and glacier-covered Cascade peaks hold special meaning to central Oregon Native Americans. While it is not our place to speculate what the impact would be on the identity of the Klamath Tribes and Confederated Tribes of Warm Springs when Crater Lake and Mt. Jefferson cease to be cloaked in white, it seems that there could be significant cultural consequences. The loss of snow and ice may violate the United States' federal trust responsibility to the tribes, particularly when half of Mt. Jefferson and its glaciers are on tribal lands and provide important surface and groundwater for the Confederated Tribes of Warm Springs. The loss of summer meltwater will impact the cultural identity of C'waam and Koptu fishing for the Klamath Tribes and salmon for the Confederated Tribes of Warm Springs.

We believe the best means to reduce these impacts of global warming is to assess, observe and preserve our Cascade glaciers on the Three Sisters, Broken Top and Mt. Jefferson. Glaciers smooth out year-to-year snowpack variations and document long-term changes in snowpack. If high Cascade glaciers disappear, so will Central Oregon's snowpack. The State should fund a glacier monitoring program that has a multidecadal mandate to measure glacier snowfall and melt on one glacier per volcano and glacier dimensional change for every glacier. This could be conducted at a cost far less than $100,000 a year.

Such information would allow for detailed assessments of when a given glacier will disappear, altering water availability, farming, ranching, forestry, recreation and fishing. The glacier information would also permit climate action via reduced carbon emissions to save these glaciers rather than let them die and turn the snow- and ice-covered high Cascades into a Tolkienesque Mordor of black volcanoes.

Responsible citizens should want to keep our glaciers healthy, which in turn means our snowpack is healthy. Contact your representatives and tell them to push for a State-mandated and -funded program to study and protect our glaciers and snowpack.

A recent letter to the Source lamented: "Socialism is increasingly favored by young and impressionable, uninformed voters." Had today's young whippersnappers paid better attention in high school and college, instead of looking over their shoulders for the next mass shooter, they would better understand and appreciate establishment politics. Were they attending class, instead of striking for the climate, youngsters would know that the oscillating Democratic and Republican presidencies of the past 50 years have employed all the best science to bequeath them a stable and prosperous planet Earth. If they tuned in to the evening news, instead of working a second job to pay down college or medical debt, they would have heard about upward mobility. The youngest, and therefore most naive, voters will visit the polls in 2020 without ever having known what it is for America to be at peace in the world—or how bad that would be for our military-industrial complex.

The same letter writer implied that Hitler was a socialist because Nazi is an abbreviation for national socialism. Young people must take that to heart. Everything, and especially politicians, are exactly what they say they are, and always deliver exactly what they promise. Never mind that the radical Encyclopedia Britannica says: "Were the Nazis socialists? No, not in any meaningful way...To say that Hitler understood the value of language would be an enormous understatement. Propaganda played a significant role in his rise to power. To that end, he paid lip service to the tenets suggested by a name like National Socialist German Workers' Party, but his primary—indeed, sole—focus was on achieving power whatever the cost and advancing his racist, anti-Semitic agenda" (britannica.com/story/were-the-nazis-socialists). It's a good thing that young people don't read the encyclopedia, or else it might occur to them that Hitler was no more a socialist than Trump is a populist.

I support Stephen Katz' letter which suggests new neighborhoods need to include walkable shopping areas and schools.  Ideally, there should be walkable grocery stores and restaurants and other shop potential within a half mile walk for every home.

I am also surprised that a town that is known for outdoor sports, including bicycling, is so difficult and unsafe to maneuver on a bike.

Bend is growing in many positive ways, yet it is leaving walkable neighborhoods out of the mix.

Jim: Yours represents the third letter of the week in a row that has been awarded to someone writing in support of a Bend that fosters walking, active commuting or complete neighborhoods. Sounds like Bendites (who read the Source) really like this idea. Any city leaders reading this as well? Come on in for your gift card to Palate, Jim!