I admit it: I've spent a bit too much time this week on Twitter and the websites of various national news outlets. With the Senate impeachment trial starting, I'm as riveted as many of you. Meanwhile, local elections are happening as early as May—and the partisan rhetoric spewing out of Washington, D.C., has definitely taken hold in local campaigns.

Federal dollars—and policies—do flow into Central Oregon, and we need to pay attention to what's happening there; but citywide, countywide and statewide policies and budgets also affect us greatly. Perhaps fortunately, you're a lot less likely to see a massive Twitter pile-on about a local issue. With that in mind, I'm re-upping my commitment to spend less time wringing my hands about what's happening on Twitter, and instead to spend more time getting to know local candidates and the people who represent us in person—or at least via phone. I can't promise I won't have the Senate trial blasting live on my computer speakers... but I'm trying to temper it with real-live communication. Lead by example, they say... 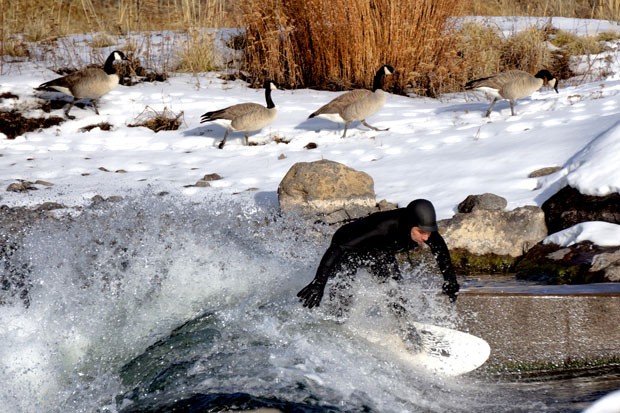 It's difficult for me to believe that residents believe the proposed road bond will do much to alleviate Bend's traffic congestion. With our population growing at such a rapid rate, it will only be a few years until we need to pass another bond. The same is true for schools, libraries and parks and recreation. One only has to look at the result of upgrades done on Reed Market Rd. The traffic is still congested, yet the city allows large scale housing developments in the area.

Our leaders say they are concerned about the lack of affordable housing. They should worry about the tax burden placed upon our shrinking middle class. We also need our leadership to address the real problem, which is an over emphasis on tourism and uncontrolled growth. Very truly yours,

I've lived here 15 years and seen Bend go through a lot in that short time. I love this place but the inability to deal with the obvious is costing too much. I'm tired of the homeless followed by a bigger homeless shelter. We need more housing so they're building 150 houses in SE Bend that doesn't help anyone without a half million for their starter home. N.I.M.B.Y. is the cry of everyone but nobody has a solution. Tourism will continue to fall until this will be a memory of a used-to-be-cool place to visit.

Hmmm. $1 billion in total saving across the state vs. higher profits for the insurance industry and higher salaries for administrators at SCMC. That's a pretty easy choice for me, especially when SCMC uses some of its money to fight its own unionized employees. I would also welcome single-payer in Oregon.

Putting aside all the politics of the discussion. I think a system that is intended to make profits, will always put shareholders ahead of patients. If health care is too complicated at the federal level, I welcome a single payer system in Oregon. I would rather my money going to provide better health care for everyone in Oregon vs lining executive pockets with cash. I would also welcome Oregon Lottery proceeds and taxes on alcohol, tobacco and cannbis to help with the cost.

A bustling dichotomy exists in Central Oregon. The new and old Bend: Interlopers, carpetbaggers and tourists mingle amongst old-timers, conservatives and devoted lovers of weaponry. I was struck recently as a tenant in a commercial building by the degree of what I would consider paranoia about outsiders. It was justified to me as a fear of the homeless being dangerous and threatening. I've lived in lots of places, in large cities including New York and Los Angeles and I never feel at risk in Bend. In this building, a small old commercial structure, the landlord has installed a variety of security cameras and devices and signs meant to prevent and inhibit outsiders from coming in. "Employees only, keep door closed, must sign in, children must be supervised, cell phones on vibrate, wash your hands" (not kidding). I wondered about this. I wondered what would make people feel such a need to control? They feel this unsafe in their own community. There isn't a high degree of crime and I personally have never been assaulted or even approached by an aggressive or violent homeless person. This can be contrasted with my experiences in Portland, Seattle and Los Angeles where the homeless are obviously severely and profoundly mentally ill and often combative. In Bend they typically hold funny signs that say something like "need money for weed" and seem more like hikers and backpackers in need of a campsite. I'm sure there are mentally Ill and substance abusing among them but typically it is unusual to see a floridly psychotic person ranting on the streets of Bend.

My belief is that this introduction of paranoia is based on fear and dislike of "the other." This is the same landlord who precluded me from placing a sign in my window of inclusion (the one that looks like a flag). It's also fear and hatred rooted in religious beliefs. ("Being gay is a sin").

Isn't it time for Bend to grow up emotionally instead of just growing in population?

Jan: Thanks for your input. Come on in for your gift card to Palate!