Editor's note: It's no secret that the word "growth" has been, and continues to be, the word that defines Central Oregon most succinctly.

It's no secret that the word "growth" has been, and continues to be, the word that defines Central Oregon most succinctly. It plays out in our coverage this week in a few ways; in Laurel Brauns' feature story that checks in on progress within Bend's Central District and Core Area, for one. It's a factor in Central Oregon's rising ethnic diversity, as is discussed in Cayla Clark's story about the upcoming Hammered Black History comedy show.

It certainly factors into Brauns' online exclusive story this week, "Solutions to the Housing Crisis," which takes a look at the volume of real estate in Bend that is owned, but not occupied, by the owners nor long-term renters. And growth continues to play out in so many other places where we shine a light. How long will this word define us? It's hard to tell, but it doesn't show any sign of stopping—and while it continues to define us, we'll continue to try to unpack what it means for our readers. 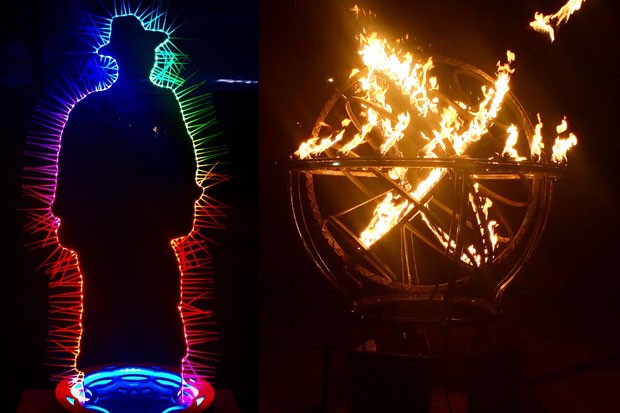 I liked your cover picture for February 13 on Love Your Neighbor. Teafly has done such a good job making it attractive. I did miss not seeing gray-haired grandmas and grandpas as many are our neighbors. I also thought it would be nice to give credit where credit is due with the "love your neighbor" phrase. God said it in the Bible in Leviticus 19 Verse 18. Jesus also quoted it in Matthew 5 verse 43 when he reminded people to also love their enemies. Paul quoted it again in Galatians chapter 5 verse 14 saying that we should love our neighbor as ourselves. So many times we see quotes and don't realize who originally said them. I just thought it was a good reminder to let people know where the quote comes from. Thank you.

ODOT could put a sign North of the Revere exit that says, "Through Traffic use Left Lane." That would relieve some of the problems at the next several exits.

Laurel Brauns reports on the eviction of homeless camps at Juniper Ridge. Some of the information involves urban growth infrastructure, specifically the North Interceptor Sewer Line Project, which provides the rationale for vacating the homeless camps. This may be necessary now, but Juniper Ridge has been a City of Bend Urban Renewal Property for many years, and the Sewer Project has been planned to go through Juniper Ridge for many years. This is sound urban planning, and the voters agreed to fund a bond to pay for the development. The bond is subtracted from property taxes each year, and has been for many years. However, the "drunk on possibility" leaders abdicated when the university, business park and neighborhoods surrounded by parks and trails, did not happen. They let the property languish, and now there's a problem.

The City blames the 2008 recession, but let's stay current. According to 2016 Bend Urban Renewal Agency Juniper Ridge Urban Renewal Debt Service Fund, the income from our taxes is $1,901,800. The sad note is the loan service is $1,078,000 (the article mentioned a "botched land deal?) The City retains money from the loan, at least since 2016, and has not stepped up to maintain the property in any way. I have ridden my bicycle through Juniper Ridge and have seen the homeless camps for at least two summers and have written to them about it. And now this sad story. I ask voters: Are you willing to vote for a new bond (tax) to leaders "drunk on possibility," this time for a transportation plan that is flawed by planning for more cars instead of planning for urban mobility that keeps our city liveable. Given the past record of Bend's city leaders managing our bond/taxes, vote NO on the transportation bond that will appear on your November ballot.

Best reporting I've seen yet. There will be profound human consequences from this poorly thought out so-called "humane" operation. The best solution is, of course, actual housing and services for those in need, but—until that day—we gain little by displacing vulnerable people from their existing community at Juniper Ridge and destroying their modicum of a safety net. What an unconscionable use of City of Bend staff and resources. Thank you, Laurel.

What people don't realize is that many people simply don't want to live like everyone else. Myself, I'd rather be homeless (camping) than work a meaningless job just to pay the rent of some depressing apartment in town. I am not mentally ill, handicapable, or a veteran; I actually did quite well in college, but I don't vibe with the way we live. I am not the only person around that sees no value in the busy ways we live today. We have to meet people like me, not just veterans, halfway, and understand that our current way of living looks like slavery to many less socialized, more out-of-the-box type people. These centralized villages are a wonderful step in the right direction for people who want to live simply, with less stuff. I'd like to see more of these villages in rural areas, around a farm that could be worked by the inhabitants. Maybe more safe and thoughtful changes to code and law are in order.

Travis: Thanks for your thoughtful and original response. Definitely a way of thinking (and living) that most don't consider! Come on in for your gift card to Palate.