Late last year, the folks at the Bend Chamber, along with myself and our publisher, Aaron Switzer, sat down for a meeting of the minds. We both had Women of the Year awards—so we wanted to explore merging our efforts into one. The Chamber has the backing and the name recognition in the business community. The Source has its reputation of being both entertainment and engine for social change. Could we meld the two into a competition that demonstrated our region's growing diversity, business acumen and wonderful commitment to the common good? I think we did. 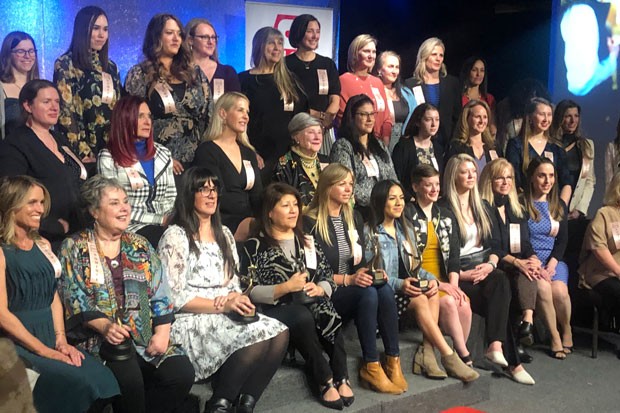 I'd like to take a moment to thank Robin Rogers of the Bend Chamber. The Women of the Year awards has long been her "baby," and I'm happy to have found a way to be foster parent for that baby this year. I'd also like to thank Erika McCalpine, the Source's 2019 Woman of the Year, who graciously agreed to serve as a judge alongside me this year, and with whom the Source continues to partner on projects aimed at the community good.

I'd also like to thank the rest of the judging panel: Aisha Ali, Bill Anderson, Emi Baxter, Deb Flagan, Connie Druliner, Wendy McGrane and Leah Ross for their fellowship and the many days spent rating the candidates and meeting with them to arrive at this year's winners. And cheers to the many nominees—as Connie Druliner likes to say, you're all winners!

Bend would be so boring without some annual Mirror Pond excitement. Now, as described in the Source 2/27 Issue, it appears that the City and Parks Department are committing to paying the lion's share of the money necessary for dredging the Pond. Many of the bulleted goals in the article (a fish ladder, enhancing habitat, connecting the DR Trail, making the Pond function more like a river while retaining the Pond in its near historic condition—whatever that means) are laudable. Still, it all seems pretty expensive to me. The price tag for the dredging alone is conservatively estimated at $6.7 million, and of course Taylor Northwest (one of the primary proponents of the project) wants the contract to do the work. Does this mean they will give the City a screaming deal on the dredging or are they just hoping to get a sizable contract for a relatively minor investment? That's certainly a question that needs an answer and it would have been nice for them to have responded to your inquiries for the article.

Another question involves PacificCorp's financial involvement or lack thereof. Since it is their dam and they are making money off a public resource it seems that they should at the very least participate in cost sharing for the project. As an alternative to the City's proposed funding options, I have another idea. Why not just let the Pond continue to fill with sediment? At some point in the near future the reservoir capacity will become sufficiently reduced until it significantly affects PacificCorp's generating capacity. When that time comes, they will be forced to either: dredge the pond themselves, contribute significantly in a cost share or abandon the dam and restore the river channel similar to what they did at Condit Dam on the White Salmon River in Washington. Seems like a win either way for the City.

Thank you Ariel Mendez for taking a holistic approach to the future of the Deschutes River and for considering the opinions of Bend residents. Neither the city or parks have money to waste and a carefully coordinated plan is needed. I believe you are correct in stating that the sedimentation of Mirror Pond has stabilized and I also believe that the dire consequences presented by Mirror Pond Solutions are grossly exaggerated.

I agree with Mr. Davis. As proposed, this dredging project would remove, at most, only 17% of the total sediment load of Mirror Pond. Sedimentation would resume—and at a more rapid rate than present—as soon as dredging ends. The goal of "reducing the frequency or quantity of future sediment removal efforts" is magical thinking, as long as the dam exists and upstream bank erosion continues (due to destructive irrigation practices). Clearly, under current conditions, dredging is futile and a fool's errand. It's hardly a responsible investment of millions of dollars of public funds.

Why, then, the push for dredging by the local power elite? The answer might be found in e-mails released by the Park District: On Aug. 17, 2015, then Parks legal counsel Neil Bryant acknowledged that one of the Mirror Pond Solutions owners "wants to get this [dredging] done before the [endangered spotted] frog reaches the Mirror Pond."

Instead of scraping it away with dredging, why not let wetland habitat evolve in Mirror Pond, as Parks Director Mendez suggests, just as it has emerged upstream from the Colorado St. dam in the Mill District? Next time you cross that bridge, take note of the delightful habitat below and take inspiration in the feeling that Bend could do even more to restore a member of the globally threatened amphibian class.

The Source claims in "Get it Right with Cap and Invest" that "...cramming the issue into a short session...may not be the right move." Such a sentiment only offers political cover to forces that stand in complete opposition to any cap and invest bill. HB2020 was years in the making, amply analyzed and vetted. Knowing they lacked the votes to defeat it in the last legislative session, Republicans walked out, preventing a quorum and guaranteeing that the bill could not pass.

SB 1530 is a compromise, softening some aspects of the original bill, with Republican input, in an attempt to convince them not to bolt in the short session, and at least allow something useful to pass. However, Republicans and their Koch-supported Timber Unity allies have no intention of allowing any meaningful cap and invest program to become law. When the bill was due to come up for a vote this past week, they bolted again, refusing to show up for work.  If they had any real desire to address the effects of greenhouse gas emissions on our climate, they would have worked with Democrats to pass the bill; or at the very least, they would not have boycotted the session once again. Instead, their goal is to prevent a vote in the legislature, insisting that the next step should be a direct ballot referendum. Then they can pour millions into defeating it, as they did in Washington and Colorado in 2018.

Perhaps one reason why Oregon has a Democratic majority is because most voters want issues like greenhouse gas emissions addressed in a substantive manner. They want their legislature to deal with the problem squarely and begin to at least try to mitigate the damage that is already evident and will most certainly worsen in the coming years. The Republican work stoppage is nothing less than a blatant attempt to subvert democratic institutions from functioning as they were intended. Unfortunately for all of us, it is working. And opinion columns insisting that more time is needed provides absolutely no incentive for them to get back to work, and only reinforces their obstructionism.

Pete: While that opinion piece was penned before the walkouts, and its premise was that the short session may have not been the time to tackle such a contentious thing, I'm awarding you the letter of the week in the interest of fostering respectful dialogue and a commitment to that type of conversation, even when the road gets rocky and/or the various sides don't entirely agree. This, of course, is another iteration of what we're seeing NOT happen in the Oregon Legislature right now. Come on in for your gift card to Palate!