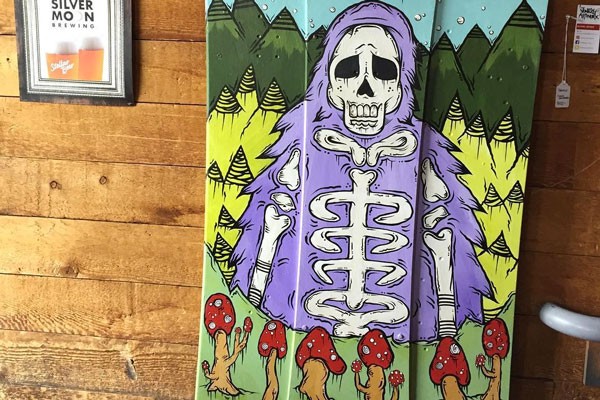 I know there is support for Democratic candidates who can connect with rural voters, because I ran two strong races for state representative in North Central Oregon as a "fair frugal farmer" in 2002/6.  I am happy to see a Palliative Care physician, Dr. Jenni Neahring from Bend running in this year's Democratic congressional primary.

Dr. Neahring stopped by my farm near Culver recently and we had a good visit. She is passionate about expanding health care access, quality and affordability.  The Affordable Health Care Act might not be perfect, but it has helped families in Eastern Ore. as much as any part of our state.

Despite this, Greg Walden played a leading role gutting ACA and replacing it with "Trumpcare" which will take away insurance from millions of Americans.

Dr. Jenni Neahring, on the other hand, wants to help improve the Affordable Care Act that has improved the finances and health of so many rural Oregonians.  She has my vote in the Democratic Primary!

I was very excited to read that Devore's Good Food Store, now The Humble Beet, is planning to open the end of April. As a long-time customer and advocate for The Good Food Store (almost 40 years) I am so happy to hear that the new owners are bringing back a lot of their deli items, local veggies, fresh eggs and much more. We are lucky to have so many good food stores in Bend but my favorite is homemade, small and local which will now be The Humble Beet!

My name is Genysee M. I'm 12 and I'm a sixth grader from Pacific Crest Middle School. A while ago I thought I couldn't do anything. I couldn't make a difference because of my age. Not that long ago I was introduced to climate change in a new way. Now I know I can do something.

Everyone's heard of climate change but do you really know what it is? Climate change is the change around us in our climate that happens over a long period of time. Many things chip in to make climate change occur but humans are the biggest contributors to climate change by far. We fill the air with carbon dioxide which is rebounded back from a sheet of gases, trapped inside our atmosphere. The carbon dioxide or CO2, also known as greenhouse gasses warms up the planet, causing global warming or climate change. We release CO2 everyday. When you use a car. Burning fossil fuels. Cutting down trees to build. Trees hold and trap CO2 but if we cut them down that's so much more CO2 stays in our atmosphere where we don't want it. A tree can hold to an average of 202.9 pounds of CO2 per year. All of that just went into the atmosphere! We are doing this to ourselves. All of us together, even if you don't know it yet.

Due to Greenhouse Gases the temperatures are rising steeply, causing climate change or more commonly known as global warming. In 1884 most of the world was cooler than average, keeping a nice even temperature. By the time it was 2017 over 90 percent of the world is hotter than average and still increasing. Seventeen out of 18 of the hottest days on Earth have been recorded after 2001 beside 1998, with 2016 having the hottest day ever recorded. Scientists predict that at this rate we may not have snow at all in the future because it's too warm that it instantly turns into rain as it falls.

With global warming heating up our world, ice is melting. Ice in both Antarctica and Greenland is steadily decreasing over the years. In Antartica there's a change of 127.0 gigatons per year in the area of ice and Greenland at 286.0 gigatons per year. Animals that depend on the ice can lose their homestead when ice melts and this can heavily affect us as well. Glaciers are some of the best sources we have for fresh water and for people who don't get much water, like Africa or India, that means a lot for them to stay healthy.

Have you ever watched or read "The Lorax"? Our oceans are starting to become uninhabitable just like the movie or book. When ice melts it goes into the ocean. Sea levels have risen nearly 7 feet in the past hundred years. The new water can disturb water currents, sea temperatures and of course, sea levels. It can also affect the cleanest of the water or make it murky. This affects multiple fish and marine life as they lose their homes or are forced to leave their homes because they're no longer able to live there.

As much as we cause climate change we can be the stop to it! We may not be able to reverse what we did but we can stop it in the future or slow it down. If everyone does even just one small act we as the people can stop climate change together as one. You could just trade one car trip with walking. Cars emit and ton of CO2 into the atmosphere. Or you could eat one meal without meat. It makes a 100 times more CO2 to make one pound of meat than one pound of vegetables. Try to recycle or compost. Reuse what you have. Making stuff can produce thousands of CO2 to make even one pen. A single pen emits 6,108 pounds of CO2 to be made and transported to Bend. That's the amount it would take to drive 15,238 miles in an average car! Save energy or take shorter showers. Even if you just do one of these things can help out in saving the world from climate change.

Genysee: Thanks for your letter. I hope someone reads it and gets inspired by the actions of our youth, doing their part in the interest of social change! Come on down to the Source for your gift card to Palate.