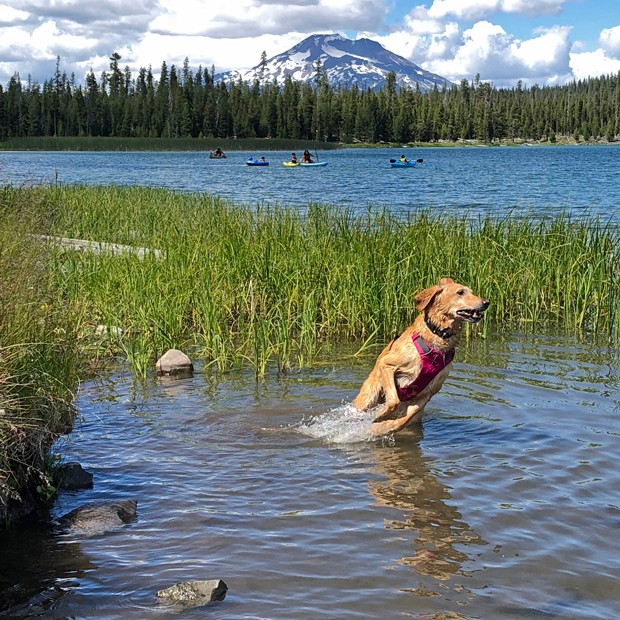 In response to, "Family Separation Policy: Oregon Leaders React To Changes," on 6/20 at Bendsource.com

In response to Mr. Boyd, I am so very proud to have Senator Merkley as our US Senator. Arguably, his presence at the converted Walmart in Houston sparked the national outcry that led to the reluctantly issued Trump order to reunite these families. Actually, the current number of people seeking admittance to the States equals the numbers at the end of the Obama administration. But only Donald Trump has the genius to exacerbate an already horrid situation. True to his form of governance, this is a crisis of Trump's own making.

Voters who recognize the negative impacts of the human overpopulation should question Senator Merkley's stance on immigration. Both he and Senator Wyden voted to shut down the government if DACA recipients were not given amnesty, but have not recently supported higher levels of border security to help prevent additional people from entering the US illegally. Senator Merkley is currently visiting detention centers to investigate possible "abuse" of children while not acknowledging that the number of individuals seeking asylum has risen from 5,000 to 94,000 in just seven years. There is currently a backlog of 600,000 immigration court cases. This is why President Obama implemented "catch and release" allowing many who entered illegally to stay and await a scheduled court hearing. Of course, most did not show up (an estimated 500,000) and remain illegally in the US. Senator Merkley's "grandstanding" on this issue is politics at its worst and does a disservice to US citizens, legal immigrants and many illegal immigrants. Many of us who have followed the immigration issue for years suspect that many Congressmen want things to remain as they are because the flood of individuals entering illegally and bogus asylum seekers supplies their donors with cheap labor. That our environment will continue to suffer from the impact of rapid population growth seems not to matter.

In response to, "McKenzie Paddle Adventure," 6/28 at Bendsource.com

In your "outside guide" section, the K.M. Collins story covering a day paddling the McKenzie merits some comment and correction.  A Bendite since 2015, I am an Oregon and Willamette Valley native who runs a drift boat down the McKenzie and moonlighted as a fishing and rafting guide for five years.  What I would like to offer to Collins story is some clarity for those who may want to boat the McKenzie but are unfamiliar with the territory.

First of all, the put-in.  While most of us do refer to it as Blue River the formal name is Forest Glen and is identified as such on most maps.  As for the three rapids mentioned in the story, which I will not repeat, I'd suggest not using those names lest someone assume you are a recent California transplant — at least those from the westside of the mountains.  The rock garden referenced has remained nameless for as long as I know although some old-timers refer to it as Cooks.  Below that the section with the large standing waves is known as Clover Point, which has changed in the last 10 years and previously was mostly an uneventful rollercoaster ride.  The third rapid is Eagle Rock which sits below a tall rock spire on the left hand bank of the same name and for obvious reason. Silver Creek boat launch is in fact less than a mile downstream.

Enjoy the McKenzie and please, pack out your garbage.

Fully undercelebrated are the Kayak Moms here in Bend, who are bad-ass enough on their own, but still have the energy to shuttle the gang of dirt-bag wannabes from takeout the put-in day after day for years. All this time, mostly, hiding the fears they share with their offspring while they descend into the gorge below. That takes courage.

With the poverty levels and those in need to help Bend residents from housing, food, programs, jobs, etc... we are building this? Not sure we have our priorities straight. IMHO

Well if you read the article it says the money being used is coming out of the property tax fund. You know, people like myself that pay an asinine amount of money in prop taxes every year to live here. I'm glad it's being used for outdoor recreation. Especially since it's in my tax zone. The people who have. No jobs, housing, etc. Won't be effective in any way. They aren't contributing to this park anyways.

In response to, "PAC withdraws support of local House candidate," on 6/28

A long time ago the famed humorist Will Rogers quipped "I am not a member of any organized party I am a Democrat."

I would be very grateful to the Source or any other investigative journalist to do some research on who, exactly, the FuturePAC is and whose interests it is representing.

The allegations against Dr. Boddie seem absurd on the face of it. Dr. Boddie was a keynote speaker at our recent PRIDE event and yet he's accused of homosexual slurs? Something's not adding up here. FuturePAC's credibility is on the line here, and not Dr. Boddie's as far as I'm concerned.

There is a rot in the Democratic Party that became obvious when PACs and insiders in the Democratic Party sabotaged the exceptionally powerful Bernie Sanders campaign in 2016 in favor of the inside candidate. I see this current controversy largely in the same light. It seems that insiders would rather lose a general election than have to deal with a candidate they cannot fully control. At least that seems a plausible explanation for the current mess the Democrats have created for themselves in District 54. Some investigative journalism is called for here. Mere reporting of the contents of press releases won't suffice.

In response to, "Invest in Safe Transportation," on 6/28

I am a cyclist that has stopped riding our streets because it is simply too dangerous. The laws that are in effect about cyclists' rights do not save your life. Arrogance will kill you folks that think you have the right of way when in reality, tonnage does. What makes you fools think that you can proceed thru an intersection when a truck / trailer rig is making a right turn? I have cyclists, and especially pedestrians that think when the sun is in the eyes of westbound traffic on Colorado with all of the ridiculous red pedestrian Stop signs, that they will be seen, because hey, it is the law. The law will not save your life if you can't be seen. Get some common sense on your side and you will survive our roads on your bike.

Michael: You learn the same thing if you take the Oregon motorcycle safety course—rules and laws don't matter when it's a bike facing a car—so never assume someone sees you, and bike/moto extra defensively. Pedal power is still worth it to avoid that downtown parking, IMHO... However you get here, be safe when you come to grab your gift card to Palate!