Naked bike ride, in response to... 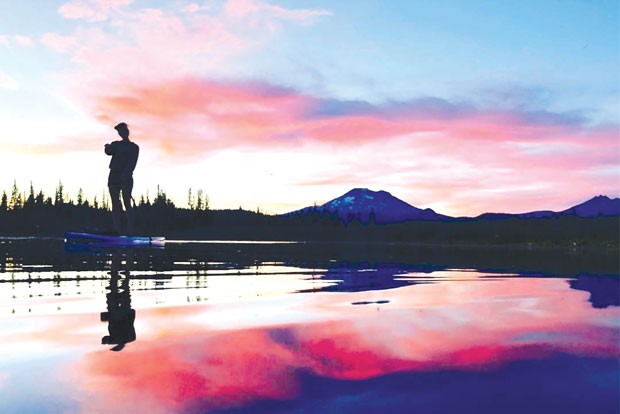 There is nothing like riding bicycles with a group of naked and semi-naked people through Bend on a warm summer Saturday evening! Skinny dipping is similar but not as exhilarating because it lacks the endorphin boost which exercise gives. Riders were glowing with inner peace and nonjudgmental acceptance of others as their good karma radiated from their physical bodies. But next year can Grateful Dead, Widespread Panic, and classic rock be played on the excellent sound system with the thumping bass that a woman towed behind her, instead of modern pop rap? (I did like the ragtime tuba music though!)

The Portland metropolitan area has 2.5 million people, and I was told that 12,500 bikers attended this year's Portland Naked Bike Ride—a per capita percentage of half a percent! In Bend we had ten out of a population of 90,000, a per capita percentage of one nine-hundredth of a percent. Bend needs four hundred and forty more riders than we had this year to equal Portland's enthusiasm for TRUE FREEDOM. Shuck off your chains of Establishment uptightness, shed your false skin, and join the Bend 3rd Annual Naked Bike Ride next summer! Maximum FUN guaranteed!

Poor journalism. Showing a picture of the crack pot crazy Nevada whack jobs which had nothing to do with the Hammonds who are Oregon Ranchers! Way to feed the frenzy! The true crux of the issue is the Hammonds had served a sentence been released and were sent back to prison! That was the injustice part which deserved the pardon.

Cynthia Flupachi Trump's twitter feed is NOT real journalism. Neither is FOX News. You are the one who needs to turn the channel.....or read some actual real journalism. You people in he right are in a narrow box and you've been fooled to think that EVERYTHING outside of that box is fake and a lie when it is you that is living the lie.

Cynthia Flupachi what makes you think that the people who have disagreed with you haven't studied? What sources would you have them "study?" I've studied plenty of sources that go against what you're saying and I'm sure the folks you're disagreeing with have as well.

Yes use is increasing. But does the government need to collect personal data on every user to control that use? Does the proposed system even work as intended? What is the government doing with your data?

In response to, "Consent and Accountability," on 7/12

Doctor Nathan Boddie stepped way over the line when he made the unsubstantiated charge that Moey Newbold was a substance abuser. She denies that charge. But no one, least of all Doctor Boddie, can deny that he chose to attack Newbold by publicly sharing information (whether true or not is irrelevant) about a medical condition, the disease of addiction. Doctor Boddie knows this. His attack on Newbold is akin to attacking her because she has cancer. That is the largest breach of trust of all. I believe this was done to not only undermine Newbold's credibility but also to send a message to any other women out there who may have similar complaints about his behavior. It is what a bully does. His credibility is shot, as a politician and as a doctor. A little humility and soul-searching is in order. But, from what we have seen so far, that is unlikely. Prove us wrong, Nathan. Do the right thing for Bend. You cannot win this election and the longer you stay in the race the harder it will be to mount a legitimate campaign in place of your tainted one.

Michael: Agreed. Come on in for your gift card to Palate.